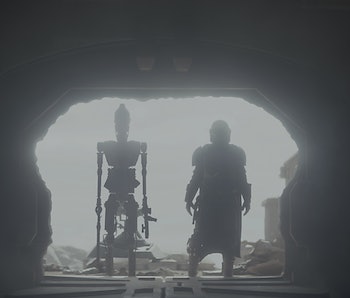 As Luke Skywalker said in The Last Jedi, “no one’s ever really gone,” but does that apply to pieces of machinery? In other words, should we all believe that a certain someone in the pilot episode of The Mandalorian is really not coming back for subsequent episodes? If we dive deep into Legends Star Wars canon the answer is clear: This character could totally return.

Spoilers ahead for The Mandalorian: Chapter 1

Toward the end of the episode as the Mando and bounty hunter droid IG-11 discover that little Yoda-baby is the target of their bounty, the Mando blows-away IG-11 to prevent the droid from killing the cute little thing. It’s a thrilling scene, but does it mean this new droid is really dead? The voice of IG-11 is played by beloved Thor: Ragnorok director Taikia Waititi, and he’s been pretty vocal about his involvement. Would the Disney+ series really write him out after only one episode?

The answer is probably not. Here are two ways IG-11 can comeback.

2. R2-D2 had his head blown off in the first Star Wars ever. Was totally fine later.

When Luke was in the Death Star Trench in Star Wars: A New Hope, R2-D2 took a pretty gnarly hit from Darth Vader’s TIE Fighter. Luke said, very clearly, “I’ve lost R2.” But, later, when Luke, Han and Chewbacca got their medals, R2-D2 was fine. If those Rebel technicians were able to put R2-D2’s brains back together after that, then surely, a hardcore assassin droid, that is built for combat could self-repair.

IG-88, another droid of the exact same type, had numerous copies of himself in old EU canon

In the 1996 Kevin J. Anderson-penned short story “Therefore I Am” — from the book Tales of the Bounty Hunters IG-88 was revealed to be one of four different versions of itself; IG-88A, IG-88B, IG-88C, and IG-88D. In the real world, this story was cooked-up to help explain why various versions of IG-88 were getting destroyed in other stories. For example, in Shadows of the Empire Dark Horse comic book series, Boba Fett destroyed IG-88, but at the same time, in the N64 Shadows of the Empire game, Dash Rendar is able to kill IG-88. But they were all duplicates of the same droid! In fact, in this version of canon, IG-88A ended-up plugged into the computer core of the second Death Star. (Where he was also destroyed, by, duh, Wedge and Lando.)

Now, there’s almost no way The Mandalorian will bring back all of this complicated canon, but it does prove there is a huge precedent for a droid of the same style as IG-11 to protect itself from destruction. If you remember playing Dash Rendar in that old N64 game, then you remember how impossible IG-88 was to defeat. So, let’s get serious, there’s no way IG-11 is down and out. Yet

The Mandalorian: Chapter 1 is streaming on Disney+ now. Chapter 2 is out on Friday, November 15.