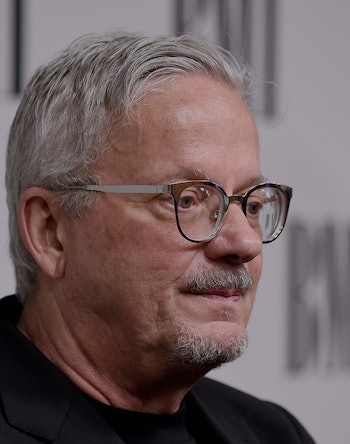 Whether you’re immersed in the latest Marvel epic or binging Netflix, the sounds of Mark Mothersbaugh will find you. The musician who wrote “Whip It” with Devo in 1980 — recently heard in an arcade in Hawkins, Indiana, the fiction town of Stranger Things — is the same person who scored the thundering outer space soundtrack for Thor: Ragnaork, which opened in theaters this past weekend.

“There are different jobs you have for different films,” Mothersbaugh tells Inverse. “You can write music for the same scene five different ways, and make people feel differently about the scene with each piece of music.” Mothersbaugh’s resume reveals something of an artistic enigma. After the punk-new wave sounds of Devo, he wrote music for various TV shows (Nickelodeon’s Rugrats theme sounds like a Devo B-Side), through Mutato Muzika, the LA-based music production company he founded in 1989. He’s also produced scores for more than 60 movies. Initially scoring primarily indies (he’s long been a favorite of director Wes Anderson), Mothersbaugh now counts Thor, the best-reviewed Marvel film since 2012’s The Avengers, among his projects.

So what’s it like producing the music for Marvel Studios, the Disney-owned blockbuster factory?

“I had no preconceptions about Marvel.”

“I had no preconceptions about Marvel. I thought well, they make these big superhero movies…and um…” he says with a vague hint of trepidation. “But when I came in and met them, I realized the people working, starting at the very top, starting with Kevin Feige, they’re invested in it, intellectually and emotionally.”

Maybe surprisingly, Mothersbaugh’s collaborations with Anderson on films like The Life Aquatic informed his partnership with Ragnarok director Taika Waititi .“After I saw Hunt for the Wilderpeople, I kind of thought of Taika like a New Zealand version of Wes Anderson,” he says. “So, when he called me to work together, I was really excited about the idea. And I thought how odd for the two of us to meet on a Marvel project. And I think he did a great job. I love what he did. I love what I got to do in it.

“I think if you called [the score] a cross between the world of Wes Anderson and the world of Thor as we have known it in the past, I think that would about do it.”

Seen through the lens of Wes Anderson movies, the germination for the entire Thor: Ragnarok soundtrack can probably be found in a Mothersbaugh track from The Life Aquatic. The multifaceted “Ping Island” is a funky synth cut used in the trailers for Life Aquatic, which included Bill Murray’s Steve Zissou awkwardly gyrating to the beat.

You can hear the potential for a Thor soundtrack in “Ping Island,” a song for a quirky 2004 indie. The song grows into a bombastic horn-laden composition that’s a better fit on the Ragnarok soundtrack than a Devo record, or Rugrats episode.

The Thor: Ragnarok score has the hallmarks of a superhero score, but it’s considerably funkier and more memorable, which is probably a credit to Mothersbaugh’s attention to detail and experimental expertise.

Mothersbaugh gave each character in Ragnarok — even Jeff Goldblum’s trippy Grand Master — their own musical theme.

“I always try write something new that sounds classical somehow, where you’re going ‘yeah I’ve heard that before,’ even though you haven’t,” Mothersbaugh says of his process. “And with Rushmore, The Royal Tenenbaums and The Life Aquatic, I got to do that, where it sounded like something you heard, but it was totally new. And I was trying to do that in Thor, too. But I had to start from the established way it’s done. I had to start with a 100-piece orchestra and a 30-piece choir, so that it had those necessary ingredients of a superhero movie.

“You want that big sound. You know, there were synths added to the gladiator scenes. But it really required those big horns and those big drums to make it exciting and feel as colossal as you need it to sound. It’s like having a hundred people playing at one time is a good thing.”

“It sounded like something you heard, but it was totally new.”

One track on Ragnarok, “What Heroes Do,” is a microcosm of what Mothersbaugh is talking about. It’s a kind of synth-march that wouldn’t be out of place in an Saturday morning cartoon from the ‘80s. The difference is that it feels appropriately epic for a Marvel movie in which the Hulk and Thor have to organize a revolution on a planet whose entire economy apparently revolves around surreal gladiatorial contests.

“When first I talked to Taika, he said to me, “Think of this movie like Thor and Hulk on a road trip.’ So, my first visuals were imagining Thor and Hulk in a big Cadillac convertible, driving across the desert,” Mothersbaugh says. “And then I read the script, and the script was really kind of further-out than anything like that.”

Mothersbaugh says he’s always a little surprised when a movie turns out to be better than he imagined; something he thinks is true of Thor: Ragnarok.

“Think of this movie like Thor and Hulk on a road trip.”

Sometimes the “screwed-up” movies present different challenges for a composer. “So, your job becomes different on some movies. I’ve had someone say: ‘This was supposed to be a romantic scene, but Robert De Niro had gas and they don’t look like they have an chemistry!’ And then you have to compensate for it with the music. You have to remove the gas and make into love gas.”

(Mothersbaugh has scored exactly two movies featuring De Niro, meaning if we’re meant to take this quote literally, he either had to fix a scene with his music in the film Las Vegas or Rocky And Bullwinkle.)

He says he didn’t have any such problems with Thor: Ragnarok. It seems that like some of his collaborations with Anderson, that the film met with this artistic vision seamlessly. “I wanted to respect the world we were in and be part of the world of Marvel and embrace it. At the same time, maybe bring some new creative material to that world. I feel like I was able to do that. So, it was a delightful experience.”

Just as Devo’s “Whip It” might briefly overshadow Kyle Dixon and Michael Stein’s Stranger Things score, Mothersbaugh’s music in Thor: Ragnarok is briefly upstaged by a classic Led Zeppelin cut, “The Immigrant Song.” But Mothersbaugh is cool with this, because, with a career as diverse as his, he’s able to see this kind of thing from multiple angles. Even if Led Zeppelin does kind steal his thunder in two big scenes in the film.

“Songs are important. Sometimes they steal away the chunk of the film you wanted to score the most. Put a love song in where you wanted your theme to come and hit home,” Mothersbaugh says. “But, I’m on the other side of the fence too. People license my songs maybe once a month. I just watched Casino, I think they have “Whip It “in it four or five times. And there’s something that a song does that is different from a score. It’s potent and it’s valuable. And I’ll tell you, I love that Led Zeppelin song in there. When I saw it in the trailer I knew it was going to be in the film for sure. Because it works so well with Thor.”