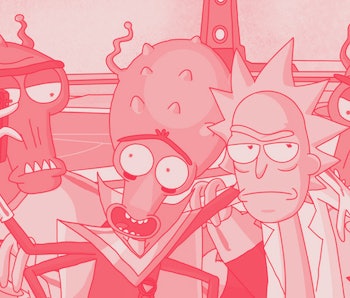 Westworld Season 3 is trying something different — not better, but different. Four episodes in, it seems clear that everything happening onscreen takes place at the same time (no multiple timelines here), but the HBO series could be introducing another type of twist. With each new episode, it seems more likely that we're seeing simulations within simulations.

If that sounds familiar, well, you're not wrong. While Westworld Season 1 was impressive in its original storytelling and world-building, Season 3 is ripping off popular sci-fi like Rick and Morty in more ways than one.

Simulations within simulations — Westworld has played with the heady concept that our lives might just be a simulation since the very beginning. Season 1 flirted with the idea but never committed, while Season 2 introduced the Forge, a secret facility in the park where data on human visitors was stored and analyzed in a complex simulation (it turned out those cowboy hats were secretly brain scanners).

Westworld Season 3 is primarily set in the "real world," but is it really the real world? In Episode 1, one character joked that they might all be living in a simulation, while Caleb (Aaron Paul) lives an existence so manipulated and fatalist that it might as well be a simulation.

As the season continued, it became clear that some, if not all, of what we're seeing is happening in a simulation created Rehoboam (that's the massive AI computer that predicts everything in a simulation and then forces the real world to replicate its predictions). In a recent article, The Ringer did an impressive job rounding up small clues from Westworld Season 3 that suggest we're seeing some moments both IRL and in Rehoboam's simulation, pointing to subtle changes between the two. It's like a "Find the Differences" game, just with a $100 million budget.

Meanwhile, when we first catch up with Maeve in Season 3 she's trapped in a simulation of War World (another Westworld park that may or may not exist in the show's "real" universe). It's simulations all the way down.

Rick and Morty already did it — This might all be impressive if Rick and Morty didn't do a better job with the same concept in a clean 20-minutes (Season 1 Episode 4, "M. Night Shaym-Aliens!"). In that episode, a group of aliens captures Rick and Morty and place them in a simulation in a bid to fool Rick into giving up valuable information. (Morty's hapless dad Jerry also gets stuck in the simulation by mistake and has the best work meeting of his life as the simulation runs on autopilot around him.)

The twist here comes when we learn that Rick, Morty, and Jerry are in a simulation in a simulation, though moments later it becomes clear Rick was never fooled at all and managed to stay one step ahead of his captors. Like Maeve overloading the War World simulation in Westworld Season 3 Episode 2, Rick makes quick work of his digital prison.

More than Inception or even The Matrix (gasp, I know), Rick and Morty nails both the absurdity and complexity of placing a simulation within a simulation. "M. Night Shaym-Aliens!" explores why such a set of circumstances might ever occur and pushes them to hilarious limits. Four episodes in, Westworld hasn't come close to matching Rick and Morty, and I have little faith the HBO will turn things around the back half of Season 3.