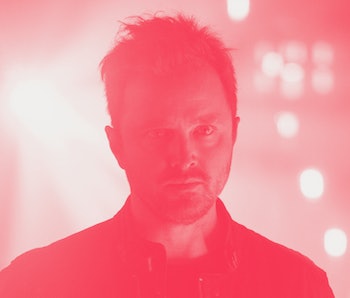 If your entire life story was controlled by a giant computer, would it matter if you were a robot or not?

This is the basic question asked in Episode 3 of Westworld Season 3, "The Absence of Field," and it might be setting up a bigger philosophical conflict. Dolores has recruited her first truly human ally, but by blurring the line between robotic Host and augmented human, Westworld has changed the game when it comes to its hallmark twist from the first two seasons: making the audiences guess who is a secret robot and who isn't.

So, is Aaron Paul's likable underdog, Caleb, a Host or a human? For the first time in the history of the show, it may not actually matter. That said, Episode 3 may have dropped a huge hint.

Throughout Season 1 of Westworld, a lot of the twists relied on two modes of obscurity — characters who were secret robots and muddled timelines. In Season 2, we (mostly) had a good idea who was a Host and who was "real," which left the intentionally unclear timeline plot device the biggest narrative weapon. This is why in Season 2, Bernard often asked — perhaps for the sake of audience clarity — "Is this now?"

But, all of that suspense-through-backstory-denial stuff is (so far) a thing of the past in Season 3. Though we still numerous stories overlapping at the same time — we didn't see Dolores at all last week — this season seems determined to be more linear. Still, that doesn't mean the inherent Westworld-ism of Westworld is gone.

By crossing timelines and obscuring the true nature of people's biology (or lack thereof) the Westworld of old made a literal statement about who has "free will" and who doesn't. Obviously, this ongoing existential question is central to all of Westworld, but in the latest episode of Season 3, one major mode of control has twisted that question in an unexpected way as we continue to learn more about Aaron Paul's character, Caleb.

What is the "Mirror World"?

By the end of Westworld Season 3 Episode 3, we see Dolores holding a datapad full of all the probable outcomes of Caleb's life. It's an obvious not to similar control pads in previous seasons to reveal the pre-determined lives of various Hosts and how that data can be hacked.

In this episode, however, we also see something called Caleb's "drip" which appears to be an implant that allows people to control his basic body functions, most urgently his heartrate. Basically, it appears that some humans in the "real world" of Westworld have implants that allow the outside world to control their mind and body. (Maybe everybody does?)

Later, Dolores implies this tech is connected with Incite, and that the data-mined by that company has allowed for the creation of a "Mirror World" in which calculations are made to predict the path for a person's life. This echoes what Liam told Dolores about the supercomputer Rehoboam in Episode 1.

For a decent amount of time, it seems that Rehoboam has been charting the course of individual lives using the personal data in the "Mirror World" as a guide. So, this means that "Mirror World" isn't a simulation or park populated by Host copies of human beings. Instead, its a database of likely outcomes for the way people's lives will probably end-up.

Dolores reveals the flaw in this thinking: it's self-fulling. Because the "system" (Mirror World/Incite) has predicted certain outcomes for Caleb, society at large reinforces those outcomes by denying him new opportunities. "Mirror World" is basically illegal data sharing turned into an oppressive algorithm running everyone's lives.

How is Dolores able to fight this system?

Presumably, the reason why Dolores is able to plan a revolution at all is that Rehoboam didn't expect self-aware "robots" to leave their amusement parks at Delos and start messing with regular human society. Just like William was able to get Dolores "out of her loop" back in Westworld Season 1, Dolores is offering Caleb a similar choice in Season 3.

But, then again, the key word here is presumably. Right now, we could assume that the reason why Dolores has been relatively successful in infiltrating the "real" world is that she's not part of the masterplan Rehoboam laid-out for the human race. Recruiting a down-and-out dude like Caleb continues to make Dolores' plan successful, because statistically, Rehoboam wouldn't expect Caleb to take this many chances with the status-quo.

That said, we're making a lot of assumptions. The narrative conflict of Westworld Season 3 wants us to believe Dolores is fighting the system and the end of this episode doubles-down on that idea. But is she really? Right now, we know the mysterious Serac (Vincent Cassel) wants to stop Dolores, but is he even a real person?

If Serac turns out to be some kind of holographic projection of Rehoboam itself (which seems likely, though that's just my theory) then the idea that he/it wouldn't have taken into account a revolution from other A.I. feels implausible. Which would suggest another twist is coming.

Okay, so is Caleb a Host? Is Serac?

Because Caleb has an implant that controls his body, it seems very unlikely he is a Host in a literal sense. But by demonstrating that so many human beings (read: the poor) don't have the free will they think they do, Dolores has proven that the philosophical line between Host and human is pretty damn blurry. This echoes what she says in Episode 1 when she tells the creepy investor guy that "it's hard to break our loops." Dolores appropriated language used to describe Hosts to describe the tendencies and bad habits of certain people. What Episode 3 suggests is that there's a literal similarity between Hosts and humans — they're all being controlled by someone else's story.

In the case of Hosts in Westworld, their stories were (at different points) written by Robert Ford or Lee Sizemore; humans writing the life story of robots. But now, it's the reverse. If Rehoboam (and maybe a secretly A.I. Serac) are writing the stories of humans, that means a "robot" is controlling the destinies of regular people.

So no, Caleb is probably not a Host. He was probably born organically and not made by Delos or some other company. But his free will is just as tenuous. And if this plays out the way it seems to be headed, then Westworld Season 3 may have finally turned the metaphor of the Hosts revolting into something a little more relatable.