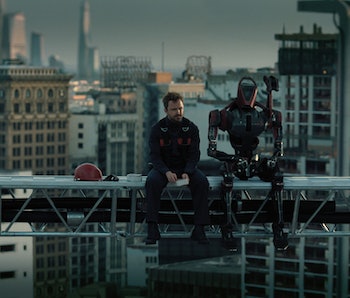 In a not-so-subtle change from previous episodes, the debut of Westworld Season 3 seems to unfold as a linear story. In theory, this means the "mind-bending" series should be easier to follow, but if you've watched "Parce Domine," you know this isn't true. Despite the more traditional timeline, Westworld is confusing as ever! (In this ever-changing world, it's nice to be able to count on that, right?)

Here are five of the biggest WTF moments from the Westworld Season 3 Episode 1, complete with what — we think — are explanations about what is really going on.

Spoilers and some speculation ahead for Westworld Season 3 ahead.

5. Dolores versus a super-omputer called Rehoboam

Right from the very start, Westworld Season 3 makes you think the whole thing is going to be about Dolores (Evan Rachel Wood) taking revenge on the human world for how shitty they were to all the Hosts in the various Delos parks. After trashing the house of a super-wealthy (and super gross) Delos investor, Dolores seeks to gain information about who co-created Rehoboam. The giant, round, (kind of old-school) supercomputer is apparently running a huge data company called INCITE. Everything Dolores does this week — trashing that guy's house, dating the lame figurehead guy named Liam, creating Host versions of Liam's bodyguard — is all in service of trying to get more information about INCITE.

It seems like INCITE is a company that sort of subsumes Delos, at least when it comes to the secret data-mining aspect of the business. In Westworld Season 2, we learned that the real purpose of the various Host-populated parks was to gain data about all the guests. INCITE appears to be 100 percent connected to that business venture. Because that meta-function is partially responsible for Dolores' semi-unsuccessful revolution, she clearly wants more information about INCITE and the creator of the super-computer, Rehoboam. By the way, this word comes from the Hebrew name of the King of Israel in roughly 931 BC.

To be clear, you did not miss anything in Season 2. INCITE and this Rehoboam super-computer stuff are all-new plot elements in Westworld Season 3. However, Dolores's ability to create new host bodies is indeed from Season 2. Both this current Dolores robot body and the version of Bernard hiding at the farm were manufactured there. This explains where that host version of Liam's bodyguard came from.

4. What's up with Tessa Thompson again?

Cigarette-smoking Charlotte Hale (Tessa Thompson) is also, secretly, a Host. Season 2 ended with Dolores escaping in a Charlotte-shaped Host body. It's unclear who is piloting the Charlotte-bot now that Dolores is back as well.

Either way, this means, for a big portion of the first half of the episode, you're still watching Dolores execute her new plan. The difference is, Charlotte Hale is making everyone believe she's Charlotte Hale, while really doing what Dolores wants.

And if Charlotte is somehow also being controlled by Dolores, that means that on some level, the bodyguard host Dolores creates at the end of the episode is likely similar; a robot body designed to look like one person but sharing a mind with the "primary" Dolores we see throughout the episode. Some of this is guesswork. We don't actually know exactly how Dolores interacts with faux-Dolores inside of Charlotte's body.

But, here's the thing: The reason Charlotte/Dolores wants Delos to no longer be a public company is directly related to the fact that Dolores stole a bunch of money from the creepy investor guy. At the beginning of the episode, she sarcastically compares stealing that guy's money to investing in a "start-up." Collectively, Dolores's goal is clearly to make a new "race" of Hosts. She says "I'm the last of my kind, for now."

So, because Charlotte Hale wants to make Delos a private company again, that means Dolores could do whatever she wants with literally all the tech and info inside of Westworld or any of the other parks.

The biggest addition to the cast in Westworld Season 3 is easily Aaron Paul as Caleb, a guy with a very sick mother who's struggling to make ends meet. During the day, he has a straight construction job, and in a move worthy of Magic Mike, he moonlights as a criminal by using a very efficient app called "RICO." This is the source of the voice that says "Make Money, Mother Fucker" on his phone.

Right now, it's a little unclear how RICO functions inside of the quasi-utopian economy of Westworld's "real world." In fact, in almost every way, Caleb is the first "normal" person we've encountered in the contemporary version of Westworld's future. Throughout the episode, we're told he was in some version of the army, but this scans a little suspicious. In some of his army flashbacks, Caleb is in uniform, and other times, he's not. He lost a good friend named Francis (Kid Cudi), who, via a plotline stolen from Black Mirror, "speaks" to Caleb throughout the episode as a virtual-phone ghost of himself, trying to ease some of the trauma.

But is all of this real? Caleb is clearly a real person, but are his experiences in the army 100 percent legit? When he talks to his shrink, there's a subtle implication that psychologists were observing Caleb and Francis during combat. So, what's going on? Could Caleb be a secret host? And if so, are his memories of the army and Francis real? Or perhaps some kind of complicated virtual simulation?

2. What are these discs people are swallowing?

Three times in the episode, we can catch references to the idea that several people have an "implant," and swallow what appears to be specific discs that activate those implants. We see the creepy money guy swallow one early in the episode, but later, Caleb's sick mom takes one, too. This isn't medicine. It's some kind of brain hack with unclear implications. At one point, Francis point-blank asks Caleb: "Ever think about getting your implant turned back on, smoothing out the rough edges?"

This seems to imply that these implants — and their corresponding edible discs — have some kind of therapeutic effect on par with various forms of prescription medication. But, as evidenced by the overdosing naked guy yelling at a picture of a wolf at a weird party, it's possible to overdose with this technology. It's also apparently illegal to do so.

1. Why is Bernard going back to Westworld?

Like Alan Grant heading back to an abandoned Jurassic Park, the final moments of the episode find Bernard (Jeffery Wright) chartering an off-the-books boat back to the island that houses all the Delos parks, including Westworld. But why? Well, we don't know yet. But, what we do know is that Dolores has specifically framed Bernard as the only person who caused the Host revolution in Westworld, even though that's not true.

Since we last saw him last season, Bernard has been living under an assumed identity, trying to get by at a futuristic slaughterhouse. But because there are wanted posters for him everywhere, a few guys (not using that Make Money Motherfucker app) try to jump him. Bernard kills these dudes and goes on the run, heading for Westworld via boat. Why is he doing this?

It's worth noting that Bernard is only "alive" because Dolores made him a new Host body at the ending of Season 2. At that point, she told Bernard that she knew he was going to try and stop her, which is apparently why she re-created him. So if we follow that line of reasoning, it seems like Bernard is heading to Westworld to try and curb whatever deadly scheme Dolores is cooking-up.