“The power is coming from her heart.” 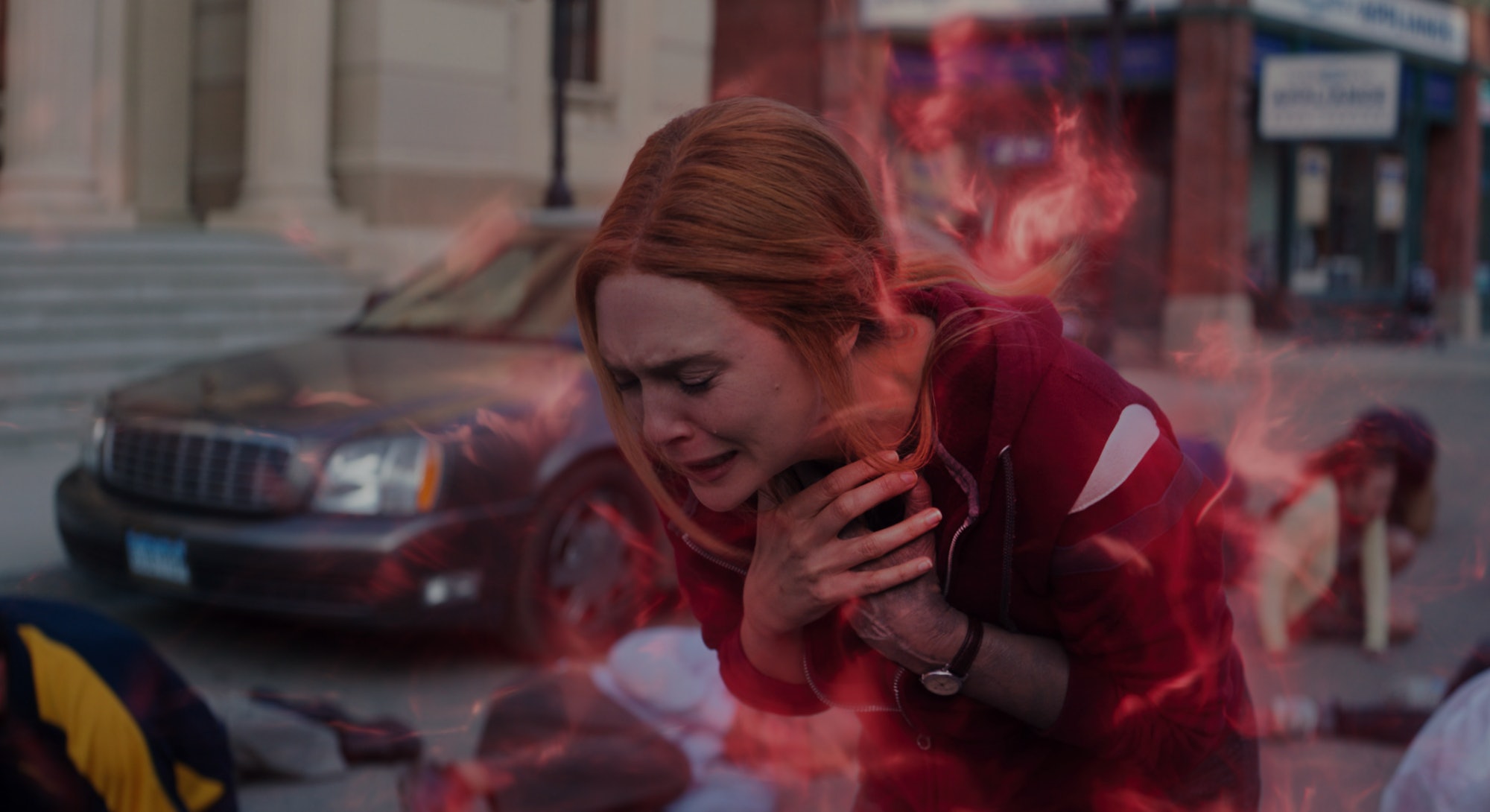 Everything seems perfect in the New Jersey town of Westview. The lawns are cut, the fences are bleached white, and Wanda is the loving housewife of her synthetic husband, Vision.

But fans of the Marvel Cinematic Universe know there’s a lot of pain beneath suburban bliss. That’s where the WandaVision visual effects team, led by Tara DeMarco, took their inspiration for the hit show’s most important visual effects shots.

WandaVision stars Elizabeth Olsen and Paul Bettany back in their Avengers film roles of Wanda and Vision respectively. Set shortly after Avengers: Endgame, the series riffs on decades of sitcom classics like The Dick Van Dyke Show, Bewitched, Malcolm in the Middle, and more in an elaborate exploration of loss, trauma, and grief.

It’s that last one — grief — that powers one of the most visually impressive scenes in all of WandaVision.

DeMarco, whose previous VFX credits include The Bronze (2015) and The Pirates of Somalia (2017), oversaw the effects of WandaVision, a show that gradually added more complex VFX as the show itself traced the historical trajectory of television VFX.

One of the most crucial effects comes in the penultimate episode, “Previously On,” which reveals how Wanda brought her beloved Vision back to life: through a violent, uncontrollable outpouring of emotions stemming from her own broken heart.

“For the beat where Wanda creates the house, we did look at her moment of grief in Age of Ultron where she explodes and kills the Ultrons,” DeMarco tells Inverse. “We thought there would be a similar dramatic outpouring of grief. The idea is that in both scenes, the power is coming from her heart. It’s a broken heart.”

DeMarco tells Inverse readers to look closely where the majority of the visual effect come from.

“You’ll notice both when she creates the house and when she creates Vision, most of the power is coming from her heart,” she says. “Because that is what is driving this whole world creation.”

That scene also shows how Wanda creates a simulacrum of Vision. DeMarco confirms the yellow-hued energy of Vision is rooted in the Mind Stone, a major source of Wanda’s powers. “We wanted Vision to be created of the same power that powered him before,” she says. “Vision’s color is the color of the Mind Stone. It just felt right to keep it in that same family.”

There is a visual parallel between death and rebirth in WandaVision, and much of it is told in VFX. The look of Vision’s “rebirth,” if you will, was inspired by his death from 2018’s Avengers: Infinity War, “and a little of [director] Matt Shakman wanting to see monofilament fine circuitry.” (Vision doesn’t have blood vessels, but he does have computer circuits that look the same way.) “It’s meant to be romantic, like this beautiful creation of her love,” DeMarco says. “[Shakman] wanted something delicate to be what’s formed by him.”

WandaVision and the Reverse Blip

Another instance of birth referencing death is the return of Monica Rambeau (Teyonah Parris) and hospital extras in the show’s fourth episode, “We Interrupt This Program.” When Monica is “un-Blipped” by her mother’s hospital bed, the dust effects are referencing Thanos’ infamous “snap” from the end of Avengers: Infinity War.

In 2018, Inverse reported that DeLeeuw’s team chose the Power Stone as the key Infinity Stone that dusted half the MCU. But the original Infinity War VFX team, led by Dan DeLeeuw, was preoccupied with another unnamed Marvel project at the time and was unavailable to DeMarco. DeMarco says she “did not know” about this bit of Marvel trivia, but she still sought to maintain the same language of the Blip in the “un-Blip.”

“We did not speak to Dan about how those effects were achieved. But we did use references from their films,” she says. “We did go to one of the vendors who created one of our favorite blips, which was the Nick Fury blip. Matt Shakman loved that the Nick Fury blip was slow and lyrical. His idea was that ours would be as lyrical as a ‘reforming.’”

A big difference between the Infinity War blip and WandaVision’s reversal: color.

“We tried to have the un-Blip people come back in color.”

“We tried to have the un-Blip people come back in color,” DeMarco says. “We thought it would be really creepy if they were gray. If you watch any blip from Infinity War, they turn to ash and blow away. We didn’t want them too ashy. They were coming back to life. So the idea was we would see some of the colors and we would lose a little bit of the ash.”

It may be surprising to know that WandaVision had a bit of independence on crucial, MCU-wide visual effects like a “blip” or “un-blip.” DeMarco says the team developed “our own looks” with Matt Shakman.

“We show [Marvel] the work in progress,” DeMarco says. “If it bumps onto something they know and we don’t, they’ll tell us, like, ‘Hey, you might not want to do that’ and steer us in another direction. But generally speaking, the director takes lead on what things should look like. Unless it’s dissonant with the MCU, that’s what we end up finishing.”

WandaVision and the Wonder Woman effect

The WandaVision team did try something truly “wonderful” with another effect. In the ‘70s-themed episode “Now in Color,” Paul Bettany’s Vision runs around with speed reminiscent of the era’s science-fiction action shows like The Six Million Dollar Man and the iconic Lynda Carter series Wonder Woman.

In what could be considered an unexpected crossover with DC, the WandaVision VFX team studied how Wonder Woman (and Col. Steve Austin) dashed onscreen.

“Vision’s ‘70s super speed required an entire research rabbit hole of how they showed people running fast in the ‘70s,” DeMarco says. “We watched a zillion old television shows to figure out how we were going to achieve that effect. At the same time, we did black and white testing, we did ‘70s speed testing to get something that looked like you left the shutter open but hit a flashbulb for exposure a few times.”

While WandaVision had the advantage of modern digital effects, “we tried to rely on pretending that it was a shutter speed that had multiple exposures as he ran to get the ‘70s [feel].”

For this one, DeMarco didn’t work alone. The VFX outfit Monsters Aliens Robots Zombies (MARZ) joined in to lend a hand. Ryan Freer, VFX supervisor at MARZ, says the effect was already in testing phases when MARZ came aboard.

“In Episode 3, you can see the effect with Vision making burgers and putting together a swing set in the opening sequence, then running with the doctor throughout the episode,” Freer tells Inverse. To achieve the effect, the crew shot Paul Bettany “in slow motion” to have options out of multiple frames during editing.

“Because it was shot in slow-mo, some of the shot lengths were extremely long, which was a challenge in VFX,” Freer says. “When we incorporated the CG Vision head into all those slices, it became much more work to create the effect than anyone expected. One of the shots ended up being 5,000 frames, for example.”

“The show gradually increased its VFX shot count with each episode.”

While WandaVision stands out as a loving tribute to bygone TV, it’s still an epic story set in the Marvel Cinematic Universe. DeMarco says the show’s VFX shots ramped up with every episode before culminating in a flashy showdown.

“The show gradually increased its VFX shot count with each episode,” DeMarco says. “Each episode had more than the one before. Our last episode had two battles, super-speeding kids, and an exploding Winnebago. It was meant to be a big Marvel finale.”