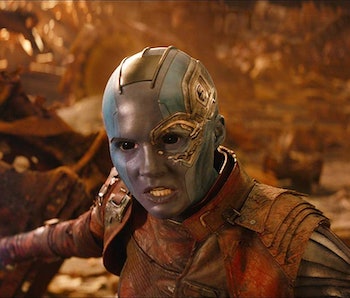 For everything, there is a price ... and that includes the Infinity Stones.

Among all the temporary losses experienced through The Blip, there were also permanent losses. We saw the loss of Vision explored in WandaVision, but there’s another permanent loss that hasn’t been examined: the original 2018 Gamora, whose death may underline one of Thanos’ darkest secrets.

The theory — A theory on Reddit from u/LemoLuke suggests Thanos’ sacrifice of Gamora in Avengers: Infinity War, designed to earn the Soul Stone, was always his original plan — but over time, this person he viewed as just a pawn to get the stone was in fact someone he had grown to love. So, rather than sacrifice Gamora, Thanos sought a plan B, by finding someone he could use to get around this loophole.

This is where Nebula comes in.

According to the theory, Thanos adopted Nebula with the intention of sending the two daughters to seek the Soul Stone and force Gamora to sacrifice Nebula. This would still allow him to get the Stone without having to pay such a steep price and would explain why he stoked such a resentment in Nebula. She was little more than a pawn.

This means that Thanos would have to know about the price of the Soul Stone years before he actually arrived on Vormir, but he still seems surprised when he hears the conditions in Infinity War. Perhaps this is because he heard the “soul for a soul” part of the price, but not how the Stone would be wise enough to discern whether the sacrifice was genuine.

That’s why when Gamora taunts Thanos that he really couldn’t love anything, he gets so emotional. Despite all his plans, he really must give up the one person he ever truly loved.

The theory also suggests that Nebula knew the price of the Stone as well, which is how she instantly knew when Thanos came back with the Soul Stone but without Gamora that she was dead. When Black Widow and Hawkeye go back to Vormir in Endgame, Nebula says “All they have to do is not fall out.” This could be a reference to their ship being on auto-pilot, or it could be a reference to the connection they would need in order to give a true sacrifice later.

This makes Nebula’s journey in Endgame — siding with the Avengers, facing off against her father and her own self — so much darker. She knows her entire purpose was to be Vormir fodder, but Gamora was given that destiny instead. That not only creates such deep resentment for her upbringing, but also brings about even more guilt than the simple loss of her sister.

The Inverse analysis — Even if Thanos never really loved Nebula, her turn against everything she was raised to know in Endgame is already devastating due to Gamora’s death. Adding on top of that Thanos’ own intentions for her, and Nebula could have the most tragic storyline in all of Marvel.