'WandaVision': Writer who inspired it had "no role" in the show

"The Vision made my career." 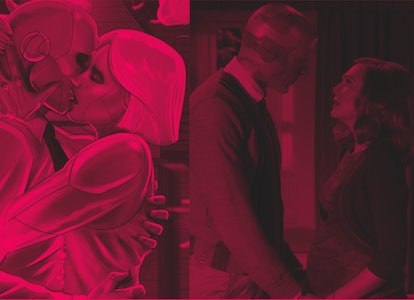 The trippy Disney+ series WandaVision didn't come from a vacuum. The first Marvel show on Disney+ takes root from several key comic book sources, one of them being the acclaimed 2015/2016 Marvel Comics series The Vision.

In an interview with Inverse talking about his latest DC Comics series Batman/Catwoman, The Vision writer Tom King reveals he wasn't consulted in any capacity on the creation and development for WandaVision. But the author personally credits the book for putting him on the map of the comic book industry. (Marvel also gave him a shoutout in the show's end-credits.)

"They did not consult me," King tells Inverse. "I wish it all the luck in the world. I played zero [role]."

In 2015, Tom King teamed up with artist Gabriel Hernandez Walta and colorist Jordie Bellaire on The Vision, a 12-issue series about the Vision and his attempt to create a "perfect" life in suburbia with a wife and children. Heralded for its postmodern approach to superhero comics with tight Ernest Hemingway-esque prose and David Lynchian eeriness, The Vision was awarded an Eisner Award — the Oscars for comic books — for Best Limited Series in 2017.

There are big differences between King's Vision and WandaVision. Namely, there's the matter of Wanda (played by Elizabeth Olsen in the series) who has only a minor role in King and Walta's comic. Instead, The Vision stars another character, Virginia, a synthetic being Vision creates to be his wife along with their two teenage children, Viv and Viz. None of the Vision's family have appeared in the MCU.

But stylistically, WandaVision owes a debt to The Vision. While WandaVision's touchstones are mid-century TV sitcoms, King and Walta's idyllic image of suburbia — itself informed by the Americana paintings of Norman Rockwell — are similarly fleshed out in the very programming WandaVision is enamored by. Marvel's own head producer Kevin Feige even admitted as much, saying the covers of The Vision revealed the style he wanted for WandaVision.

"The two things that changed that was seeing the comic miniseries The Vision end up on my desk," Feige told Variety. "Those covers in particular of Vision standing in the doorway of a suburban home with a white picket fence and a mailbox that says 'The Visions' on it — that almost Leave It to Beaver-type imagery — and what it was like when he was in that environment is what led me to say, 'Let's look at putting these two things together.'"

When I relay this to King, he responds bluntly: "Oh! That's cool. I hadn't heard that."

King has spent most of his comic book career writing for the "Distinguished Competition" on titles like The Omega Men, Batman, Mister Miracle, and now Rorschach and Strange Adventures. But the 42-year-old writer, raised in L.A. and living in D.C., believes The Vision for Marvel catapulted him to a higher tier in the industry.

"The Vision made my career," King says. "Vision made everything possible. Lord knows, that to wealth and success, I owe so much to that book. And I've gotten a ton out of it." He also notes that "more people are reading it" now because of WandaVision.

His newest book, Batman/Catwoman (a creative reunion with artist Clay Mann) similarly wrestles with love and marriage in a superhero universe. But at the heart of the stories are two characters who are more like each other than fans might think.

"They’re similar characters. They’re both a little robotic," King says. "They examine situations rather than react to them. But they approach love differently. Vision is pursuing love. Vision’s great idea is to become normal. He feels that part of being normal is that Donna Reed perfection, to find someone and create this simulacrum of life. Batman’s the opposite. He sees no use for love. When Batman falls for Catwoman, he does it reluctantly. Every instinct tells him to run."