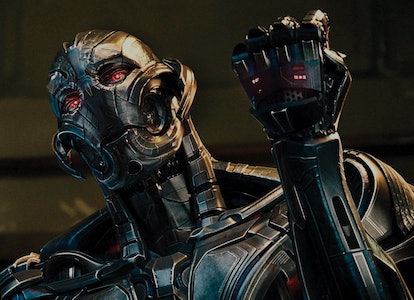 Every episode of WandaVision ends the same way: with Disney+ recommending Avengers: Age of Ultron. We assume that's just because the second Avengers movie is pretty much required viewing if you want WandaVision to make sense, but what if that's not the only reason?

Rumors are flying that Ultron could return from the dead in WandaVision, and one new theory uses an overlooked Marvel cartoon to explain how the supervillain could be hiding in plain sight. Intruiged? Let's dive in.

First, let's answer a simple question: why do people think Ultron is in WandaVision?

As far as we know, Ultron died at the end of his title film, but in the Marvel Cinematic Universe, is anyone really ever gone? During a Reddit AMA in 2019, MCU boss Kevin Feige even said, "I love bringing back characters people think they've seen the last of."

More recently, Marvel fans have pointed out that a Google search for "WandaVision cast" brings up a list that includes James Spader as the voice of Ultron, but that's not exactly proof. Google doesn't have inside info, it's just scanning the internet for casting news and displaying the results in a grid. Even IMDb doesn't list Spader in the WandaVision cast. So take this "Google leak" with a Hulk-sized grain of salt.

That said, if Ultron is going to show up in WandaVision, we have a pretty good idea how it might happen...

Is Hayward actually Ultron in disguise?

One thing is clear by now: S.W.O.R.D. director Tyler Hayward is up to no good. In WandaVision Episode 5 he tried to kill Wanda with a missile. He's also described her as a terrorist and seems to be generally anti-superhero. In Episode 6, Darcy Lewis also found some very suspicious technology after she hacked into his computer files.

Who is Hayward? He might just be an angry bureaucrat who blames the Avengers for the Blip. He might be Hydra. Maybe a Skrull. Or maybe, he's actually Ultron.

Hayward isn't from the comics. He's an original WandaVision invention. But he may have an analog in the broader Marvel universe.

In the animated series Avengers: Assemble, which ran from 2013 to 2019, we met a similar character named Truman Marsh: a shady bureaucrat with a vendetta against superheroes with a dark secret.

Marsh is based on a character from the comics who blamed super beings for the death of his parents and became warden of a super-max security prison called The Vault. However, in Avengers: Assemble, Marsh is a liaison between the government and the Avengers. He also seems to dislike superheroes, specifically the Hulk. It's later revealed that Marsh is actually Ultron in disguise. (Gasp!)

If WandaVision is going to bring back Ultron, having him disguised as a human makes a lot of sense. And who better than Hayward — a mysterious new character who wields lots of power and has a bizarre grudge against Wanda — to actually be Ultron in disguise?

Then again, the odds that WandaVision is taking its cues from a kids' cartoon that ended two years ago feels a little unlikely. But some ideas are so great they transcend single shows or movies. Avengers: Assemble wasn't the first story to suggest robots could be hiding in plain sight as humans, and it won't be the last. The question is: will WandaVision use this same trick, or does the Disney+ series have something else up Hayward's starched sleeves?