“It is our destiny to command!” 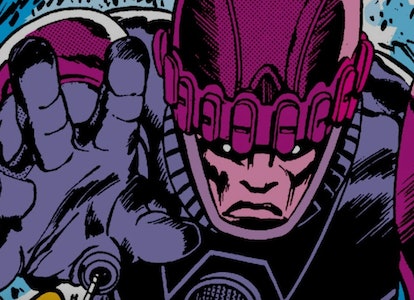 The Theory — One Reddit user suggests that the reason Josh Stamberg’s Tyler Hayward (S.W.O.R.D.’s Acting Director) is tracking Vision’s body is that he wants to use it to build the Sentinels. The Redditor points out Hayward’s clear dislike and distrust of “super-powered individuals” — evidenced by both his confrontation with Teyonah Parris’ Monica Rambeau in WandaVision Episode 6 and his clear desire to kill Wanda rather than negotiate with her — as the key motivating factor behind Hayward’s possible Sentinel plans.

WandaVision Episode 5 also made it clear that S.W.O.R.D. wasn’t just keeping Vision’s body safe. The security footage featured early on in that episode showed Vision’s body split up into multiple parts on different lab tables (a recently shared BTS photo from WandaVision confirmed this), suggesting that S.W.O.R.D. may have been experimenting on Vision’s corpse. The mention in WandaVision Episode 6 that Hayward was monitoring Vision while he was inside Westview by tracking the “decay signature of vibranium” only further established S.W.O.R.D.’s clear interest in the superhero’s corpse.

WandaVision has yet to reveal the point of S.W.O.R.D.’s experiments, but is it possible that the organization is hoping to use Vision’s body to create Sentinels with the same, or similar, powers as him?

An Answer to Superheroes — Putting the Sentinels in the MCU, while unexpected, wouldn’t be a strange choice for Marvel to make. The studio has been setting up a widespread in-universe distrust for the Avengers and superheroes in general for years now, starting with Tony Stark’s hearings in Iron Man 2, through the creation of the Sokovia Accords in Captain America: Civil War, and even with the Avengers’ failure to stop Thanos in Infinity War.

Notably, there was already a brief mention of the Sokovia Accords in WandaVision Episode 5, and considering the growing impact and destruction that Wanda is causing in the Disney+ series, it’s very possible that the events of WandaVision could serve as a dramatic catalyst for the creation of the Sentinels by S.W.O.R.D. in one of the MCU's future titles. There are also a lot of rumors that WandaVision will introduce mutants into the MCU, and if that's the case, then the emergence of so many new super-powered individuals may only further motivate S.W.O.R.D. to build the Sentinels.

In the Marvel comics, the Sentinels are created by Bolivar Trask as part of his attempt to save humanity from what he considered the threat of the growing mutant population. Marvel could pretty easily change the origins of the Sentinels, though, without having to do all that much. Trask was also played by Peter Dinklage in 2014’s X-Men: Days of Future Past, so the studio may, understandably, be looking to avoid using the character in the MCU.

The Inverse Analysis — This theory, like all WandaVision theories, remains nothing more than pure speculation right now since the series could go in a number of different directions throughout its remaining episodes. But the Sentinels would certainly make for powerful antagonists for the Avengers to deal with — and their creation could serve as an exciting culmination to a storyline that Marvel has been building in the MCU for a long time now.

If the MCU's government institutions really don’t trust superheroes and want to keep them in line, why wouldn’t they create beings capable of fighting them? Beings that would, theoretically, follow their every command? Looking at it that way, the creation of the Sentinels in the MCU seems like a very real possibility, and we can only imagine how dangerous they’d be with Vision’s powers imbued in them.

More like this
Entertainment
Jan. 25, 2023
The MCU could bring back a hero from its most underrated TV show
By Dais Johnston
Entertainment
Feb. 3, 2023
Marvel just revived its primate assassin — What to know about Hit-Monkey
By Mónica Marie Zorrilla
Entertainment
4 hours ago
Quantumania Producer Confirms an Ant-Man 2 Fan Theory Was Right All Along
By Eric Francisco
LEARN SOMETHING NEW EVERY DAY.
Related Tags
Share: