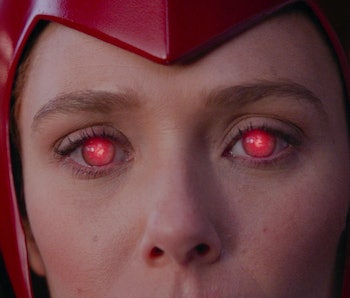 WandaVision is a strange show — and those commercials are the weirdest part of all. Almost every episode of WandaVision up to this point has included a “commercial,” which all hearken back to one of Wanda Maximoff’s past traumas. As a result, most WandaVision viewers have come to the conclusion that the commercials are — like the show’s sitcom structure and style — a creation of Wanda’s.

But a new fan theory suggests the opposite — that it isn’t actually Wanda making the commercials. Instead, the creator of the commercials may be someone else, and their purpose may be even more nefarious than you think.

The Theory — It's possible the creator of WandaVision’s commercials is not Wanda herself, but a powerful villain working behind-the-scenes. The theory suggests that the commercials are injected into Wanda’s sitcom life in order to remind her of the trauma and tragedy she’s experienced in the outside world, and therefore, keep her invested in maintaining her control over all of Westview and its inhabitants.

The theory goes on to say that the commercial in WandaVision Episode 6 (“Yo-Magic”) may hint at the malevolent intent of the commercials. Fans think the commercial’s stop-motion shark is actually a stand-in for whoever the real WandaVision villain is, and that the shark’s dialogue in the commercial (“Hungry? I remember hungry. I used to be like that all the time [until I] snacked on Yo-Magic, bro!”) signals that the villain could be using Wanda’s magic in Westview to stay alive and, possibly, grow in power.

Painful Reminders — The theory that someone villainous is creating WandaVision’s commercials relies entirely on the accuracy of another popular WandaVision rumor — that the show’s real villain has yet to be revealed. Many fans who believe the latter theory speculate that the real villain in WandaVision is a character from the Marvel comics who has yet to be introduced in the MCU, like Mephisto or Nightmare. And it would be in keeping with the personalities of both those characters to not only use Wanda’s real-life traumas against her but also to feed off the energy generated by her powers for their own gain.

If the aim of the commercials is to emotionally manipulate Wanda, that adds further validity to another popular fan theory — that Evan Peters’ Pietro is WandaVision’s mystery villain in disguise. That theory gained traction in response to Pietro's odd behavior throughout WandaVision Episode 6. The character repeatedly poked fun at Wanda's struggles in a way that felt extremely off to many fans, and he displayed an awareness of what was going on in Westview that didn’t make much sense for the character to have.

That the shark in the Yo-Magic commercial bears some design similarities to Pietro’s Quicksilver costume in WandaVision Episode 6. The two characters even behave similarly in the episode. Whether that was intentional or just a coincidence is unclear right now, but hypothetically, what better way could there be to manipulate (or torment) Wanda than to masquerade as the brother she tragically lost?

The Inverse Analysis — There are only three episodes left of WandaVision, which means that whatever remaining mysteries the show has up its sleeve will likely be revealed sooner rather than later. And the origin of the powerful Hex that surrounds Westview is, undoubtedly, one of the biggest things fans are looking forward to finding out in the coming episodes.

Given Wanda’s apparent confusion over how she “created” the Hex, it’s definitely possible that she’s not the only one responsible for the show’s many strange events as well. But we’ll have to wait to see if any other party is, indeed, the source of WandaVision’s unsettling commercials.