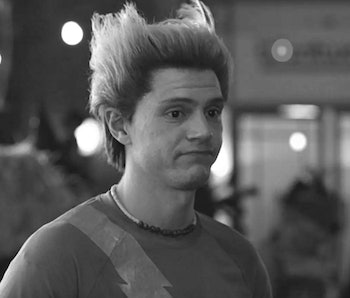 WandaVision is full of tricks, that much has been clear from the very beginning. But none of the show’s reveals quite matched the one that ended its fifth episode when Evan Peters’ Quicksilver officially crossed over from Fox's X-Men movies into the Marvel Cinematic Universe. WandaVision Episode 6 — which premiered on Disney+ today — saw Wanda struggle to come to terms with Pietro’s apparent return for much of the episode's run time, but maybe that's because Peters isn't playing her brother at all.

Some Marvel fans believe that WandaVision’s Pietro isn’t actually Evan Peters’ version of the character from the X-Men films — or a riff on Aaron Taylor-Johnson’s Quicksilver in Avengers: Age of Ultron. Instead, some fans believe he’s a supervillain in disguise, and after Episode 6, there's a lot of evidence to support this theory.

The Theory — Pietro’s arrival in WandaVision Episode 5 was sudden, not just for viewers at home, but also for Wanda herself. Unlike the various strange events and glitches of WandaVision’s first four episodes, all of which Wanda seemed prepared for or unphased by, it was clear that the appearance of her (so-called) brother came as a major shock. One interpretation of the scene could be that Wanda just surprised herself with her own powers.

But Marvel fans have begun to speculate that the reason Pietro’s return came as such a surprise to Wanda is because she had nothing to do with it. Instead, the theory suggests the Pietro who has arrived in Westview is actually an impostor — a villain disguising themselves as a version of Wanda’s brother in an attempt to further manipulate and fool her.

The Evidence — Aside from the abruptness of Peters’ entrance in the show, there are a few other reasons to think WandaVision’s Pietro may not be who he says he is.

WandaVision Episode 6 features a lot of scenes between him and Elizabeth Olsen’s Wanda, and throughout each of the scenes, his behavior just seems a bit off. While he has the same sarcastic, trickster attitude that Peters’ Quicksilver had in the X-Men films, the way Pietro antagonizes and pokes fun at Wanda in Episode 6 feels slightly more malicious than we’re used to from Peters’ version of the character. He also has little-to-nothing in common with the Pietro from Age of Ultron, outside of his powers.

Altogether, Pietro’s behavior in WandaVision Episode 6 feels disconnected from the previous live-action versions of the character. Assuming this theory is correct, the explanation is that he isn’t Pietro at all, but one of the rumored WandaVision villains pretending to be him in order to trick Wanda or momentarily stop her from asking too many questions about the origins of the “Westview Anomaly.” It’s certainly in keeping with, say, the characters of Mephisto or Nightmare — two comic book villains who have been heavily rumored to be in WandaVision — to manipulate their targets through false identities.

It’s also worth noting that WandaVision Episode 6 does have what appears to be a handful of sly references to Mephisto, who in the comics, is essentially the Marvel universe’s version of the Devil. Peters’ Pietro mentions “Hell” multiple times in the episode, and even at one point refers to Wanda’s twin sons, Billy and Tommy, as “demon spawn.” The latter line feels particularly intentional given that Billy and Tommy are born using shards of Mephisto’s own soul in the comics.

The Inverse Analysis — It’s clear that there’s still a lot that has yet to be revealed in WandaVision, including how the "Hex" that surrounds Westview was created in the first place. But the show also has yet to really explain how Wanda snatched Peters’ Pietro from an alternate universe and put him in the MCU. It is possible that the explanation is as simple as it seems, and Wanda really did just break open the multiverse to bring some version of her brother back.

But Pietro’s behavior in WandaVision Episode 6 certainly calls his identity into question (strangely, he seems just as aware of what’s going on in the show as Wanda, if not more so). And what better way could there be to keep fans from thinking too deeply about Pietro’s role in the show, than by casting another Quicksilver actor as the character and making viewers think it’s just the beginning of a multiverse crossover?

Does this mean we're in for yet another MCU multiverse fakeout? Either way, with Doctor Strange in the Multiverse of Madness on the way, it won't be too long before Marvel Studios finally gives us a glimpse into some parallel dimensions.