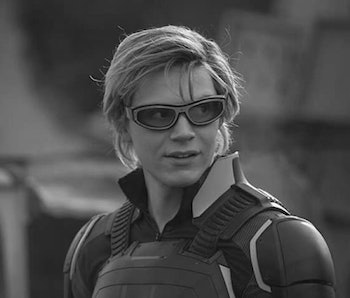 WandaVision Episode 6 needs to answer a lot of questions after Episode 5 introduced Evan Peters as Quicksilver. But here's the big one: Is that really Pietro?

There are so many theories about Quicksilver's "true" identity in WandaVision that not even Tony Stark could keep track, but one possibility that no one seems to have considered could be the most logical option of all. A convincing new theory for WandaVision Episode 6 argues that Evan Peters might actually be a classic Avengers villain in disguise. Here's why we think it might be right.

But first: HOW DID TV AND MOVIES GET YOU THROUGH THE PANDEMIC? We want to hear from you! Take this quick Inverse survey.

Assuming that Evan Peters isn't just playing a version of Pietro Maximoff from another dimension, we have to assume he's someone else in disguise. The obvious answer is Mephisto, the Marvel universe's version of the devil who plays a major role in the comic book story that inspired WandaVision, but there's an even better choice we're all overlooking: Loki.

A new theory from redditor u/TheMediocreCritic effortlessly connects WandaVision, the upcoming Disney+ series Loki, and Paul Rudd threequel Ant-Man and the Wasp: Quantumania. The basic premise here is that after getting stuck solving time crimes for the Time Variance Authority, Loki attempts to strike a deal with Wanda in exchange for her help. This results in the destruction of the TVA, freeing Kang to wreak havoc on the multiverse.

After a decade of imprisonment/ employment in the TVA fixing timelines, Loki finally figures out a way to free himself. Loki enters Westview and manipulates Wanda offering her the one thing that she desires, A Mind stone from another timeline. With a new Mind Stone, she could resurrect Vision. In return, all Loki asks that she frees him. Once free, Loki promptly burns the TVA “to the ground.” With the TVA destroyed, the Multiverse is unpoliced and quickly falls into madness, opening the doors for Kang to enter the world.

To be fair, there are some logical leaps here, but overall the theory is sound. Loki is famous for disguising his appearance, so that part checks out. He's also familiar with the Infinity Stones and may have the means to get one from an alternate dimension thanks to the TVA. Finally, the Mind Stone is probably the thing Wanda wants more than anything else since it would allow her to fully reanimate Vision, so that part makes sense too.

If you're wondering why Loki didn't make himself look like the Marvel Cinematic Universe's original Quicksilver (Aaron Taylor Johnson), this theory has an answer for that too:

And in case your interest needed another boost. It is Loki posing as Pietro. Loki has only seen another universe’s version of that character. This is why he is different.

The best part of this WandaVision theory is that it explains perhaps the most exciting part of Marvel's Phase Four: Kang the Conqueror.

A warlord from the distant future, Kang is a popular Marvel supervillain best known for fighting the Fantastic Four (and maybe being Mr. Fantastic's distant ancestor). However, it's already been confirmed that his MCU debut will happen in Ant-Man 3, which is set to star Jonathan Majors as Kang.

If this theory is true, it could instantly connect WandaVision to Loki, Ant-Man and the Wasp: Quantumania, and the new Fantastic Four movie. Considering that WandaVision is already expected to set up Spider-Man 3 and Doctor Strange in the Multiverse of Madness, that means this sitcom parody might really be the most important chapter in MCU history.