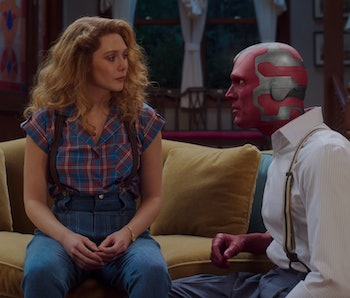 The wait between WandaVision episodes has gotten more and more difficult in recent weeks. After drastically changing its format four weeks in, WandaVision’s fifth episode dropped some bombshell twists last week. As a result, viewers have been anxiously awaiting the release of WandaVision’s next installment, when the show will no doubt find yet another way to completely subvert viewers' expectations and send Marvel fan theorists reeling.

Thankfully, the next episode of WandaVision is almost here, so here’s everything you need to know about WandaVision episode 6’s release date, start time, and more.

When is the WandaVision Episode 6 release date?

WandaVision Episode 6 premieres Friday, February 12th on Disney+. The series will continue to follow its weekly release format for all of its remaining episodes as well, with its ninth and final episode currently set to premiere Friday, March 5th on the streaming service.

When is the WandaVision Episode 6 release time?

How long is WandaVision Episode 6?

Disney+ has not revealed how long WandaVision Episode 6 will be. The show’s first four episodes all came in close to the 30-minute mark, with Episode 2 being the longest of the batch at 37 minutes (end credits included).

WandaVision Episode 5 broke away from that format, and at 42 minutes is the series’ longest episode to date. There is the potential that WandaVision Episode 6 could be even longer, especially now that the series is beginning to seriously raise its stakes and take bigger risks.

Where to watch WandaVision Episode 6

WandaVision is a Disney+ exclusive series, which means all of the show’s episodes are available only to paid Disney+ subscribers.

What is the plot of WandaVision Episode 6?

The WandaVision Episode 6 plot is, predictably, being kept under wraps. However, it is expected that the episode will be WandaVision’s long-awaited Halloween installment, with both Wanda and Vision appearing in fun versions of their costumes from the Marvel comics.

The episode will also likely follow Vision as he embarks even further on his investigation into Westview, while Wanda deals with the fallout of WandaVision Episode 5’s shocking conclusion.

Is there a WandaVision Episode 6 trailer?

As has been the case for all of WandaVision’s previous episodes, there is no official trailer for Episode 6. Disney and Marvel did release a midseason trailer for WandaVision earlier this month though, made up of footage from the show’s final five episodes. Fortunately, there’s plenty of footage from WandaVision Episode 6 scattered throughout it for fans to rewatch and theorize about endlessly until the episode’s premiere this Friday.

More like this
Culture
Sep. 24, 2022
She-Hulk shows how Marvel can fix its biggest tone problem
By Eric Francisco
Entertainment
Oct. 1, 2022
Will Agatha: Coven of Chaos feature one of Marvel’s oldest (and scariest) villains?
By Richard Newby
Entertainment
Oct. 1, 2022
Who is Hulk King? She-Hulk could be setting up a Secret Invasion villain
By Dais Johnston
Related Tags
Share: