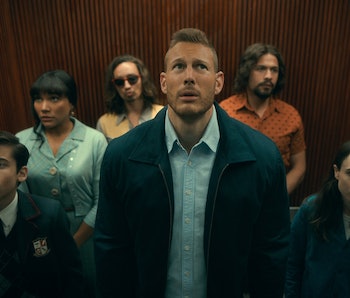 The Umbrella Academy Season 1 ended on a major cliffhanger that saw the characters time travel to avoid catastrophe. The plot synopsis, posters, and promotional images for Season 2 have all confirmed that the Hargreeves siblings’ time trip will send them back to the 1960s, scattering them throughout the decade.

With The Umbrella Academy set to return later this month, Netflix has released the first Season 2 trailer. It’s clear that wherever (and whenever) the Hargreeves go, disaster seems to follow. The superpowered siblings will have their work cut out for them while they're stuck in the past. Here are five clues of what to expect from the Season 2 trailer. Let's dissect.

5. The apocalypse comes sooner than expected

It seems that no matter what time period they’re in, the apocalypse follows the Hargreeves around like a shadow. The Umbrella Academy’s Season 1 finale ended with them traveling back in time to avoid the apocalypse, but Five is quick to surmise that they’ve “brought the end of the world back” with them. The Season 2 trailer confirms that the end of the world is still going to happen, only now it’ll occur decades earlier on November 25, 1963. Whoops!

4. Klaus is the leader of a cult

Klaus went through a lot in Season 1, but becoming a cult leader while stuck in the 1960s is certainly an unexpected twist. A speculative guess was that he would at least attend the Woodstock music festival, but he’s just full of surprises. The screenshot above tells us that he’s had some time to amass quite a loyal following. When Five tells him that the apocalypse will now happen in 1963, Klaus’ first and foremost concern is that his cult won’t take it well. After all, he did promise them that it wouldn’t occur until 2019. What will they think of him now?

Or, that’s what it looks like anyway. Allison’s first appearance in the Season 2 trailer is at a diner. She looks scared and anxious and there’s a bunch of white people behind her looking very angry. It’s possible that Allison and the unknown man sitting beside her are a part of a staged sit-in protest. Later on in the trailer, Allison is shown visiting this very same man in jail. Perhaps he was arrested for peacefully protesting. It’s also possible that Allison is in a relationship with him, but we’ll find out soon enough.

Hazel, the time-traveling assassin tasked with stopping Five from preventing the apocalypse in Season 1, returns in Season 2. However, Hazel is now older and grayer than he was in The Umbrella Academy’s first season. The fact that he’s seen speaking with Five without trying to kill him might mean that Hazel will help him stop the apocalypse this time around. Unfortunately, it doesn’t look like he’ll be joined by Mary J. Blige’s Cha Cha, his former partner in crime, in Season 2. That's a pity.

1. JFK’s assassination is central to Season 2

In the Season 2 trailer, Diego surmises that everything in their “new lives is connected to the plot to assassinate” President John F. Kennedy. Back in Season 1, the older version of Five was there on the day of JFK’s assassination. However, it was unclear whether Five was trying to shoot the killer, or if he was tasked with killing JFK himself.

Either way, it can’t be a coincidence that the apocalypse is now happening in November 1963. As you can guess, that’s precisely when JFK was assassinated. It’s possible that Five is meant to carry out his mission in 1963 — he went back to 2019 before he could — and that’s the glitch that kick starts the apocalypse to begin with. Whatever the case, The Umbrella Academy Season 2 will hopefully answer this question. You can check out the trailer below!

The Umbrella Academy Season 2 is scheduled to premiere on Netflix July 31.

More like this
Culture
8.5.2022 10:30 AM
How Netflix's epic Sandman finale sets up Season 2
By Mónica Marie Zorrilla
Culture
8.15.2022 10:30 AM
Will the Corinthian return in Sandman Season 2? Comics reveal the answer
By Mónica Marie Zorrilla
Entertainment
8.4.2022 7:00 AM
The Sandman release date, time, plot, cast, and trailer for Netflix's dark fantasy series
By Jeff Spry
Related Tags
Share: