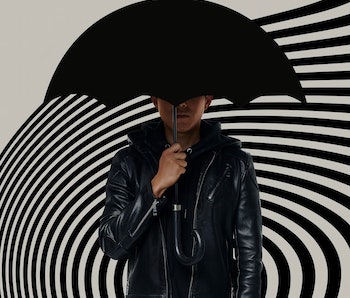 The Umbrella Academy is anything but predictable. Season 1’s cliffhanger finale left us wondering how Season 2 will tackle a game-changing twist. With new episodes of the Netflix hit drawing closer, the streaming giant recently dropped a new poster featuring all seven Hargreeves siblings and time-travel Easter eggs galore.

In May, a batch of Season 2 posters revealed the characters in their new period costumes. It was the first clue that they weren’t in their original time period. However, their faces were obscured by black umbrellas and it was hard to pick up on any clues. The latest Umbrella Academy poster gives us a lot more insight as to what’s going on. The poster showcases all seven Hargreeves siblings — yes, even the mysterious and deceased Ben — decked out in spiffy sunglasses. You can check out the poster below.

Upon closer inspection, the new poster reveals quite a few Easter eggs regarding when in time each character ended up and what’s happened to them since the Season 1 finale. The plot synopsis revealed that “some have built lives and moved on” after being dropped into the 1960s. That person looks to be Vanya, whose sunglasses reveal two children playing in a backyard, with a clothing line behind them.

Klaus’ sunglasses reveal a bunch of hands in the air, which suggests that he may have landed in 1969 and likely attended the Woodstock music festival. Meanwhile, Allison’s sunglasses reveal protesters holding signs, indicating that she was dropped into the midst of the Civil Rights movement and possibly become an activist.

Speaking of the latter, Luther’s sunglasses detail a newspaper headline that reads “War Declared.” On one hand, this could signal that it’s in reference to the Vietnam War. However, the war began in 1955 and didn’t end until 1975. What’s more, the last time the United States formally declared war was during World War II. The headline in Luther’s glasses looks similar to this newspaper from 1917:

It's possible the Hargreeves, or at least Luther, will travel to eras beyond the 1960s. After all, he could have ended up with Five instead of on his own or the Time Bureau picked him up somehow and put him to work. It's hard to tell anything else from the other characters' glasses, but the blood on Five's face is ominous.

The Umbrella Academy Season 1 finale saw the Hargreeves siblings time travel to stop Vanya from bringing about the apocalypse. However, Five’s ability to drop in on different eras is rather unpredictable and he hasn’t yet mastered how to control it. Check out the Season 2 summary below:

Five warned his family (so, so many times) that using his powers to escape from Vanya’s 2019 apocalypse was risky. Well, he was right - the time jump scatters the siblings in time in and around Dallas, Texas. Over a three year period. Starting in 1960. Some, having been stuck in the past for years, have built lives and moved on, certain they’re the only ones who survived. Five is the last to land, smack dab in the middle of a nuclear doomsday, which - spoiler alert! - turns out is a result of the group’s disruption of the timeline (déjà vu, anyone?). Now the Umbrella Academy must find a way to reunite, figure out what caused doomsday, put a stop to it, and return to the present timeline to stop that other apocalypse. All while being hunted by a trio of ruthless Swedish assassins. But seriously, no pressure or anything.

While the Hargreeves siblings might be separated at first, they'll definitely be reunited at some point if the Season 2 photos are anything to go by. Luckily, there's only a month left before we find out what's really going on.