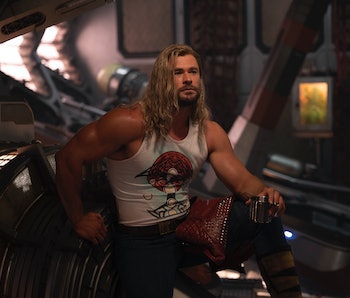 Does Thor believe? With Thor: Love and Thunder now in theaters, the next phase of the MCU is closer than ever. As is tradition, the mid-credits of Love and Thunder teases the franchise’s future. This time, the credits introduce a new superhero who, like Thor, is ripped from folklore but has established their own place in Marvel’s comic book canon. (Also like Thor, he’s also straight-up ripped as well.) And you won’t believe who’s playing this newcomer. Here’s the new face MCU fans meet in the mid-credits of Thor: Love and Thunder, and what they might mean for the future of Thor and the MCU.

Warning: Spoilers for Thor: Love and Thunder ahead.

The heroes try to form an alliance in Omnipotence City, an ancient place where gods from throughout the realms assemble to conduct diplomacy. In the MCU, Omnipotence City is ruled by the god of all gods, Zeus (Russell Crowe), an arrogant and flashy figure who wields a magical lightning bolt.

Although Thor fails to convince Zeus and the other gods, he gets the upper hand when he throws Zeus’ own spear into the god-king’s chest, killing him off for the rest of the movie — but it’s not that easy to dispose of a god!

In the mid-credits scene, a wounded Zeus vows to get back at Thor, and he orders an unseen figure to go after the god of thunder. When the camera cuts to this henchman, it’s none other than Hercules, played by actor, writer, and comedian Brett Goldstein.

That’s right: Roy Kent from Ted Lasso is in the MCU.

Hercules is often called the world’s first superhero and for good reason. In addition to his incredible feats of strength and bravery, his epic adventures involving monsters and underworlds feel like they belong in a graphic novel.

Unsurprisingly, Hercules has inspired countless movies and TV shows, from his own Italian film franchise to a Disney musical. Kevin Sorbo starred in Hercules: The Legendary Journeys in the ‘90s, and as recently as 2014 there were two Hercules movies that strove for box office dominance: The Legend of Hercules, starring Kellan Lutz, and Hercules, starring Dwayne Johnson.

Jack Kirby and Stan Lee put Hercules — modeled after actor Steve Reeves — into Marvel’s comics as a rival to their other ripped-from-mythology superhero, Thor. He became popular in his own right, especially after Tales to Astonish #79, a classic issue in which Hercules clashed with the Hulk.

Hercules would later become a member of the Avengers, and in the late 2000s, The Incredible Hulk comics were renamed The Incredible Hercules when he became the star after the events of the 2007 series World War Hulk. In 2010, Hercules took center stage during a major Marvel crossover series, Chaos War, in which Hercules assembled his own “God Squad” made up of Silver Surfer, Thor, Venus, Galactus, and Sersi to battle Amatsu-Mikaboshi, the Japanese god of evil.

What does Hercules mean for the MCU?

Hercules’ arrival hints at a future confrontation with Thor. Whether that Thor is Chris Hemsworth’s Thor or Natalie Portman’s Mighty Thor — who is “dead” but has reawakened in Valhalla — is to be determined.

While Love and Thunder was set to be Hemsworth’s MCU curtain call, the movie’s vague message that “Thor will return” is enough to suggest that Hemsworth won’t be gone for long. Thor could very well return, possibly in a fifth Thor movie where Goldstein’s Hercules plays a predominant role.

More importantly, Hercules is a prolific character in his own right, with plenty of comic book storylines that are ripe for movies. As Hercules, Goldstein can potentially carry a trilogy of films, not to mention supporting roles in Avengers sequels. If the MCU is actually moving on from Thor, it’s possible Hercules will be Thor’s replacement. The Avengers will always need a big-hearted bozo.