“But mostly, that football is life!” 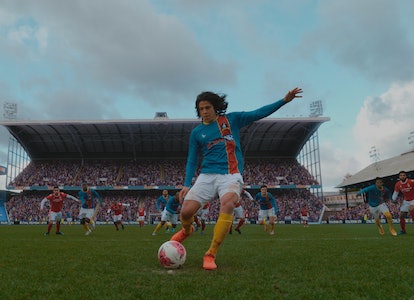 Ted Lasso Season 2 opens with a tragedy of Shakespearean proportions.

Stuck in the final minute of added time, AFC Richmond is neck-and-neck against Nottingham Forest with two goals each. A golden opportunity opens for the Greyhounds when swift-footed striker, Dani Rojas, steps up to take a penalty. The crowd surges, their faith in Rojas is unshakeable as his own (“Football is life!”) as he lines up to take the perfect shot. The ball sails through the air, powered by Ted Lasso’s magic management and Dani’s rocket-powered quadriceps, only to collide with Earl, the team’s mascot.

Dog-murder occurs live, in glorious technicolor and thankfully off-camera. But Dani, who lives, breathes and eats The Love Of The Game, goes to pieces. There’s something about Rojas standing solemnly under the shower in full-kit, profusely praying as he washes “death” off himself, that is so awful, so bleak, so believable, that it wheels round to knee-jerk funny.

It takes a lot for me to root against man’s best friend, but to defend the dignity of Dani Rojas? It’s worth it.

SCENE STEALERS is a countdown that salutes the unforgettable small-screen characters of the year. Dani Rojas is #7.

It would be easy to guess that actor Cristo Fernandez’s footballing finesse as Dani Rojas comes from a youth spent playing football, but that passion for the game is as true as it comes. At home in Mexico, Fernandez was happily installed in the professional football circuit at age 15, dutifully taking his high school classes at night to pursue his passion. Although his footballing career ended following an injury, a new love in film-making and acting prompted him to work a number of jobs (including a stint selling life insurance) to save for a move to the UK. This led to a Master’s Degree from the Guildford School of Acting in Surrey, his own film company, Espectro MX films, and his casting in Emmy-award winning Ted Lasso on Apple TV+.

Who is Dani Rojas?

Roja’s passion for soccer is Fernadez’s own, having described his time on Ted Lasso as returning to “his first love.” When you hear Rojas' gleeful cry of, “Football is life!” it comes easy for a reason. Fernandez has a genuine charm about him (his recollection on Jimmy Kimmel of a star-struck table-read with Jason Sudeikis sounds like a direct character study), which shows a deftness that stops Dani’s sweetness from straying towards cloying. His genuine likeability is something not seen on television for a good while, which is the charm of Ted Lasso itself.

Importantly, Dani Rojas embodies men feeling unable to show true emotions and struggling with mental health, especially within sport – something Cristo himself experienced. Ted Lasso attempts to unpick a very unhealthy masculinity in Season 2, which makes Dani a fantastic conductor for this “dark side.” There’s a tangible shift from the spirited striker we think we know so well, to his mantra of “football is life” suddenly tainted with death. Ominously, what else is there for Dani Rojas if not his beloved sport? Luckily, Dani is in safe hands with Fernandez, showing him openly working through trauma with the help of psychologist Dr. Sharon Fieldstone (actress Sarah Niles).

“A deftness that stops Dani’s sweetness from straying towards cloying”

We root for Dani because he represents all the best parts of loving the beautiful game. After his use as a foil to Jamie Tartt’s egotistical prowess in the first season, I wondered what Dani’s own formative exposure to the game was like, and how it produced the perfect posterboy for Ted’s hyper-positive coaching. Show us what his childhood was like in Guadalajara, please! Give us a tiny “born caffeinated” Dani running circles around his beleaguered family; too fast to stop, too endearing to yell at. What hijinks formed during his stint for Mexico’s Tigres? When did the first lightning-bolt “football is life” take place? There’s got to be something in it, Apple. Oh, and it would have to be titled Rojas. Or Dani Rojas, a la Ted Lasso. Or Rojas, Rojas! Daaaaani Rojas! sung to the beat of his own theme tune.

Dani Rojas speaks two languages to those of us dragging ourselves to the end of 2021. (He could speak four if Fernandez could elbow any more of his talents into the script.) The first is the simple need for non-toxic positivity: joyous, get-up-and-go outlook to find the things in life that make you want to get out of bed in the morning. The other is the ability to identify the darker, more upsetting parts of our psyche, whether that’s from trauma, burnout, or something else, and know that while healing can take time, effort itself is a cause for celebration.