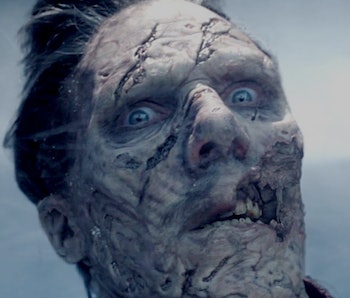 Now that Doctor Strange has safely exited the multiverse (for now), the next big Marvel movie is set to bring back everyone’s favorite space god. Thor: Love and Thunder arrives this July, and details about the Taiki Waititi-directed sequel are starting to trickle in. Now, the latest Thor 4 leak reveals some crucial information about the movie’s big bad: Gorr the God Butcher.

Warning! Light spoilers ahead for Thor 4.

Despite releasing an official Love and Thunder trailer, Marvel hasn’t offered up any looks at the God Butcher (played by Christian Bale) so far. Instead, we’ve seen a series of leaked toys and concept art which all seem to suggest that Gorr looks... a little lame.

Everything so far suggests we’re basically getting Bale dressed in a flowing white robe with all-white makeup and a big sword. If you’ve looked at the comics, you’ll know this is a step down from the tentacled alien fans know and love.

However, a new report from a pair of Marvel leakers claims to put those fears to rest. According to scoopsters John Campea, Robert Meyer Burnett, and Erin Cummings, they’ve seen Gorr in the movie and he’s downright terrifying.

Here’s the relevant bit of the conversation from their YouTube podcast (via The Direct):

Robert Meyer Burnett: “And you and I have seen pictures [of Gorr].”

John Campea: “Oh yeah, we got footage of Gorr! We have it and we are not sharing with people because I got in trouble for that before. And oh my god, when you guys see Christian Bale as Gorr, oh my god... because what we saw was straight up freaky, it is a thing right out of nightmares.”

Erin Cummings: “Yes, I saw the photo, I've had nightmares like every night ever since. It is absolutely terrifying.”

That’s great to hear, though it may also raise concerns for a certain subset of Marvel fans who weren’t too pleased with Doctor Strange in the Multiverse of Madness...

Is Thor 4 a scary movie?

This is probably a dumb question given Taika Waititi’s talent for comedy — after all, this is the guy who made the funniest vampire movie ever. Still, if Campea and co. are telling the truth, then it sounds like Gorr will be a pretty scary villain. Anyone who thought Doctor Strange 2 was “too scary” or should have been rated R may want to consider skipping Thor 4. (And yes, believe it or not, this is a thing that some people actually believe.)

Let’s not get ahead of ourselves. In all likelihood, Thor 4 will be about as far from a horror movie as you can get. Still, the idea that Marvel could be introducing a scary new villain is pretty exciting — especially considering some of the less-then-encouraging leaks we’ve seen so far.