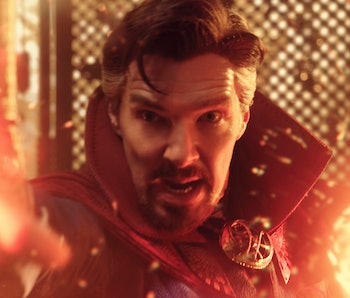 If your theater screamed through the epic cameos of Doctor Strange in the Multiverse of Madness, out now in theaters, you might have missed some really important information that could shape the future of the Marvel Cinematic Universe.

If you missed what “incursions” are all about, fret not. We’ve got you covered on not only what incursions are, but where they come from in Marvel’s comics canon — and how that could signal huge things for the MCU’s future.

Warning: Spoilers for Doctor Strange in the Multiverse of Madness ahead.

What are incursions in Marvel?

In Doctor Strange in the Multiverse of Madness, Benedict Cumberbatch’s Stephen Strange winds up on Earth-838 with teenage multiverse jumper America Chavez (Xochitl Gomez). There, they meet the Illuminati, Earth-838’s de facto Avengers who formed to defend the planet against Thanos.

Little is known about the complete history of Earth-838. What is known is that, rather than using the Infinity Stones against Thanos, Doctor Strange of Earth-838 used the Darkhold, which somehow triggered an incursion.

As explained by Reed Richards (John Krasinski), incursions are cataclysms in which two universes in the multiverse collide, leading to their mutual destruction.

Multiverse of Madness isn’t too concerned with incursions in its plot. The movie is primarily focused on stopping the unfathomably powerful Wanda (Elizabeth Olsen) from kidnapping her children from another universe. As a result, audiences aren’t given a comprehensive explanation as to how incursions work. There are only the broad strokes: Incursions destroy worlds and billions of lives are lost. Simple enough, for now.

The mid-credits scene of Multiverse of Madness, which introduce Charlize Theron as the sorceress Clea, further reveals Doctor Strange has “caused an incursion.” Where? How? Again, that’s not explained. Weirdly, Clea opens a portal to the Dark Dimension, where Strange fought Dormammu in the 2016 Doctor Strange. (Also worth pointing out that in the comics, Clea is Dorammu’s niece.) How that factors into incursions, we’re less sure about.

But perhaps knowing where and how incursions originate in Marvel’s comics can indicate where the MCU is going with it.

The concept of “incursions” begins in Jonathan Hickman’s New Avengers and is played out in a really big way in the 2015 crossover Secret Wars. (Not to be confused with the 1984-1985 Marvel crossover, which famously gave Spider-Man the symbiote.) By the end of Secret Wars, the Marvel multiverse had changed, and much of the Earth-1610 universe — also known as the Ultimate Marvel universe — was absorbed into Earth-616, the main Marvel universe.

From the first issue of Hickman’s New Avengers, incursions are introduced as devastating events where two Earths of the multiverse collide with one another. Just like the MCU.

The event itself is the incursion; the specific geographic locations where those on the ground can witness the approaching Earth are “incursion points.” You’ll know you’re in one when the sky becomes an ominous color, for example, red.

Incursions last for about eight hours before both Earths make impact. Once that happens, the universes are erased completely. In New Avengers #5, Black Swan explained that incursions can be prevented, only by completely destroying one of the Earths, which will prevent the collision from happening. It’s a staggering price to pay to prevent annihilation.

The end result of Secret Wars left one Marvel reality standing, one that had absorbed various aspects of the other world and incorporated it into its own.

What incursions mean for the MCU

Right now, Marvel Cinematic Universe is at an interesting crossroads.

With the acquisition of 20th Century Fox by Disney — another type of incursion, of the real-world corporate variety — it’s only a matter of time before more X-Men and other Marvel characters whose rights were owned by Fox end up in Disney-produced Marvel movies. The presence of Reed Richards and Patrick Stewart’s Charles Xavier in Multiverse of Madness is all the proof we need that the MCU is about to undergo some drastic changes.

But how? Here’s an idea. Since the X-Men films inhabit another universe, and the Marvel Cinematic Universe (officially Earth-616) inhabiting its own, a Secret Wars-style crossover movie could very well bridge together the X-Men continuity with the MCU once and for all.

The possibilities are genuinely endless. Marvel hasn’t yet announced what its plans are for Phase 5; we can only assume there’s a fifth Avengers movie down the road, but what it will entail and even who will be in it is undetermined. For now, destruction is imminent, and this time, a powerful glove with a bunch of Infinity Stones may not be enough to stop it.