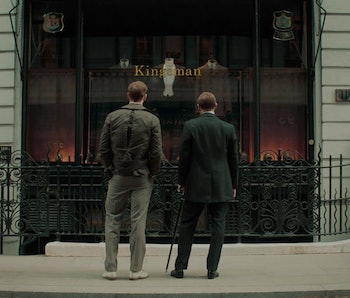 Matthew Vaughn, creator of the bawdy Kingsman franchise, will one day explore the origins of the posh organization of British super-spies via The King's Man. Except for a variety of reasons, the film originally slated to be released in November 2019 has suffered enough delays to rival even New Mutants.

A prequel to both the original Kingsman: The Secret Service and its sequel Kingsman: The Golden Circle, The King's Man will take us back in time almost a full century to a very different era. But what can we expect from the action-packed prequel? Here's everything we know about The King's Man, including its new release date.

The Kingsman franchise is loosely based on the comic book series of the same name created by Dave Gibbons and Mark Millar. It follows the exploits of a secret intelligence agency operating out of England without any government oversight. Known for its somewhat raunchy humor and flashy action sequences, the franchise might feel a bit different when set in the early 20th century. But it looks like it'll retain most of the same wit and charm we've come to love.

When is The King's Man release date?

The King's Man has had a troubled journey towards its eventual release date. In March 2021, Disney announced a new release date of December 22, 2021 for the film.

The film was originally slated for release on November 15, 2019, but it was announced in February 2019 that the film's release had been pushed back to February 14, 2020 so that Ford v. Ferrari could take the November date. Then, because the franchise was owned by 20th Century Fox, Disney's acquisition of 21st Century Fox's parent company in March 2019 led to further delays. It wasn't until November 2019 that Disney officially shuffled around many release dates, which included pushing The King's Man even further back to September.

All of this, of course, occurred long before the global COVID-19 pandemic. Disney seemingly pushed back the release date so far into the future in the hopes that theaters across the globe would have reopened fully by then.

It's worth noting that none of these delays are cause for concern related to the overall quality of the film. Deadline reports that Disney is "excited" for the movie, but for it to be a commercial success, it'll need high box office numbers — which are of course impossible given the ongoing circumstances.

Is there a trailer for The King's Man?

20th Century Fox released the first teaser trailer for The King's Man in July 2019 that teased the origins of the Kingsman organization, but the full trailer released in September 2019 (featured above) offers an even more extensive look at the story.

In that trailer, we get an extended look at many of the competing forces in the movie. The villain is a man called Rasputin (no doubt inspired by legends about the mystical Russian advisor) who seemingly leads a terrorist trying to incite another World War. And it's up to a new intelligence agency to stop it.

A brand-new “special look” trailer was released in July 2021. You can check it out below.

What is the plot of The King's Man?

The King's Man is the origin story for the organization at the center of the first two films. Actor Ralph Fiennes plays the Duke of Oxford, who founds "the first independent intelligence agency."

Harris Dickinson plays Conrad, the Duke's son and protégé in the creation of this organization. As mysterious and nefarious criminals assemble with evil intentions, the members of the newfound Kingsman operate without oversight to preserve peace at all cost, but with World War I serving as the backdrop, it won't be so simple.

"As a collection of history's worst tyrants and criminal masterminds gather to plot a war to wipe out millions, one man must race against time to stop them. Discover the origins of the very first independent intelligence agency in The King's Man."

Who's in the cast of The King's Man?

Ralph Fiennes plays the aforementioned Duke of Oxford, a wealthy noble who created the Kingsman organization. Harris Dickinson plays Conrad, his son who longs to be a soldier but winds up helping found the organization. Gemma Arterton plays Polly and Djimon Hounsou plays Shola — they both appear to be servants who work for the Duke, but they're also seemingly full members of the Kingsman organization and see plenty of action in the trailers.

Finally, Rhys Ifans plays Grigori Rasputin, the renowned real-life Russian mystic who in The King's Man seemingly assembles a group of international criminals to hatch a plot to murder millions by executing strategic terrorist attacks and blaming it on nations so as to spark another World War. The film will also star Matthew Goode, Tom Hollander, Daniel Brühl, and Charles Dance in other roles.

More like this
Entertainment
Sep. 26, 2022
Everything you need to know about HBO's The Last of Us TV series
By Corey Plante and Willa Rowe
Gaming
16 hours ago
Warzone Mobile release window, trailer, and the return of Verdansk
By Joseph Yaden
Gaming
17 hours ago
What we know about Skull and Bones, the pirate game on troubled seas
By Joseph Yaden

This article was originally published on Jan. 27, 2020