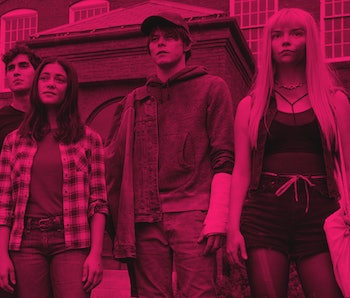 The New Mutants was finally set to come to theaters on April 2, but with the coronavirus pandemic having closed theaters, Disney pulled the film from its schedule in March. With no release date in sight, The New Mutants was once again in limbo — until now.

Disney recently made several updates to its theatrical release calendar and has finally put New Mutants back on the schedule for later this summer. The film did not undergo rumored reshoots and has remained largely intact since 2017, with only visual effects added after initial test audience screenings.

In light of the uncertainty surrounding The New Mutants' release date, we've compiled a number of other potential options for how Disney might release the film should it be pulled from the studio's theatrical schedule again.

When will New Mutants be released in theaters?

It was touch and go there for a while, but Disney has finally rescheduled The New Mutants and the film will now hit theaters on August 28. That said, it's probably best not to get too excited because that date could always change. Theaters are looking to reopen in the summer, but that's fairly optimistic considering the current health crisis. It's possible many will avoid gathering in theaters for a lot longer. Either way, it's safe to assume that Disney could shift the film's release date as it, and 20th Century Fox before it, have done so many times already.

Check out the updated movie poster below.

Will New Mutants ever come to Disney+?

At the moment, Disney+ seems like the best and most likely way to go if the theatrical release never pans out. Fans have been clamoring on social media for the (ostensibly cursed) film to be released on the streaming service. With Disney forgoing Artemis Fowl's planned theatrical release and sending the film straight to streaming later this summer, it’s possible New Mutants could get the same treatment if things don't work out on the big screen. However, there’s also a chance the film’s horror and mature themes may keep New Mutants off of Disney+ altogether.

Will New Mutants come to Hulu?

With Disney+ potentially off the table, the next viable option would be Hulu, now majority-owned by Disney. After all, Hulu is where a lot of Disney’s less family-friendly shows and movies end up. The most recent example of that shift happened earlier this year when Disney+ sent the Love, Simon spinoff series to Hulu. According to The Hollywood Reporter, Hollywood insiders wondered whether Disney would send The New Mutants to either Disney+ or Hulu instead of giving it a theatrical release, so if neither of the former options are viable, Hulu could be the answer.

Will New Mutants come to HBO?

On the surface, sending New Mutants to Disney+ or Hulu sounds like a logical idea. However, HBO has been the first home for Fox movies following their theatrical run for three decades now. Currently, the HBO-Fox deal is still active and isn’t set to expire until 2022, which means that New Mutants has a better chance of showing up on the premium cable network than the aforementioned streamers. This deal is likely why Dark Phoenix debuted on HBO instead of Disney+ or Hulu last year. However, HBO CEO Richard Plepler predicted that Disney would take back ownership over all Fox movies once the deal is done.

Long story short, New Mutants isn’t likely to show up on either Disney+ or Hulu if it’s tied up in previously held contractual obligations. That said, it’s possible that the film will debut on HBO at some point in the near future. Now that the movie has a theatrical release date again, HBO is looking like the first option.

Will New Mutants come to VOD?

Eventually, yes. Disney will probably make The New Mutants available to buy on iTunes, Amazon, and the like. The only previous snag was that VOD wouldn't have been an option if Disney didn't release the film in theaters. Now that New Mutants is presumably headed to the big screen this summer (we hope), Disney should now be able to release it on VOD afterward.

Will New Mutants come to Netflix?

New Mutants landing on Netflix is admittedly a long shot considering that all of Disney’s content — including the entire MCU slate — is leaving the streaming service and heading to Disney+. So, short answer is no.

The New Mutants is now expected to hit theaters on August 28.