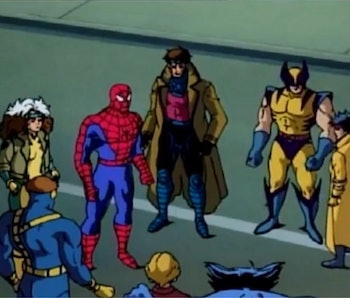 We know the X-Men are coming to the Marvel Cinematic Universe... eventually, but in the meantime, Disney might have another surprise in store. Recent clues suggest everyone's favorite superhero team that's not the Avengers could be making a splash on Disney+ very soon, but what form will they take?

Here's everything we know about the rumored X-Men revival on Disney+.

Why are we walking about the X-Men? It all started when fans noticed a new set of Disney+ profile image icons. The service recently added the option to mark your profile with a picture of your favorite X-Men (including Wolverine, Cyclops, Storm, Rogue, Professor-X, and even Magneto), which feels like a hint that bigger X-Men news could be coming soon.

At the moment, you can watch three different X-Men cartoons on Disney+ (Evolutions, Wolverine and the X-Men, and the beloved '90s animated series), but that's it. None of 20th Century Fox's X-Men movies are on the service, even after Disney bought Fox last year. If you're wondering why, it's because HBO and Fox signed some sort of streaming deal that locked up the rights to those movies, reportedly through 2022.

Unless Disney bought its way out of that contract, those X-Men movies aren't budging anytime soon. So what could these new avatar images mean? It could be nothing, but what's the fun in that? MCU Cosmic also reports that "something related to the X-Men in the works," and while we normally wouldn't put much stock in what the fan-site says, we're having trouble resisting this one.

Assuming "something" really is coming, the most obvious choice is a reboot of the '90s X-Men animated series. It's easily the best-known version of these characters, so bringing it back would be a huge win.

It's also worth noting that in June 2019, The Hollywood Reporter revealed that the original team behind the classic cartoon hopes to bring it back with Disney's blessing.

"The one thing we'd like to do more than anything else is to continue where we left off," X-Men artist Larry Houston told THR.

The obvious implication, even then, was that an X-Men reboot would go to Disney+. We still don't know if the team behind the cartoon formally pitched anything or if they succeeded, but this seemingly minor Disney+ update could be a huge clue.

Will Disney bring back this classic X-Men cartoon? Could it be something else? (Personally, I'm rooting for a long-overdue second season of Wolverine and the X-Men.) Or maybe we're totally overthinking a very, very minor new feature.

Only Professor X (and Kevin Feige) may know for sure.