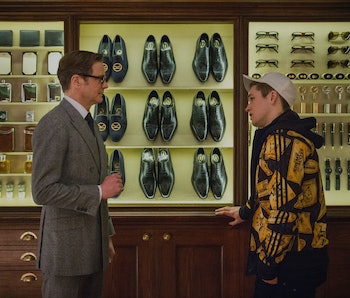 Kingsman: The Secret Service subverted a few tropes seen in old Bond films, like the evil mastermind revealing his entire plan to the hero. But there’s another, more specific way that the film series differ.

Speaking to The Hollywood Reporter for the opening of a real life Kingsman shop in London, director Matthew Vaughn explained that obvious product placement is what separates the films. “No offense to Bond, we had some big offers to get into this, but I wouldn’t, for example, put in Heineken,” Vaughn said. “X car wanted to be in it, but it didn’t fit. It cannot look like product placement, and if it does I’m buggered.”

Vaughn has reportedly “frustrated” ‘Kingsman’ distributor Fox by turning down some offers, which is understandable considering product placement can be a smart way of supplementing a film’s budget. However, it’s a boon for viewers, as frequent or overt product placement can take you out of the experience of simply watching the film. In this regard, the Bond films aren’t exactly the worst offenders out there, but it’s still nice to hear that Vaughn only wants to feature products that make sense.

Funnily enough, with there being an actual Kingsman shop now (which will be open for two months), the products featured there will remind people of the film, instead of the other way around.

Kingsman: The Golden Circle will be released on September 22. Daniel Craig will return as Bond on November 8, 2019.