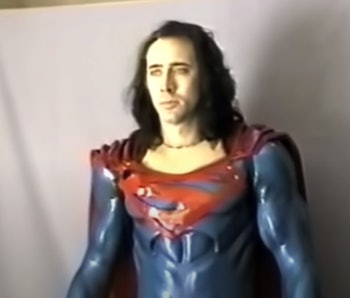 Eons ago, before the DC cinematic multiverse, Nicholas Cage almost played Superman in another DC superhero movie from Tim Burton and writer Kevin Smith. In what can only be described as a crime against cinema, the movie was canceled three weeks before shooting was scheduled to begin in 1998.

However, if some recent (unfounded) rumors about the 2022 movie The Flash are true, this unseen Superman may still become part of the DC Extended Universe.

What Happened? — In a story from FandomWire, dated September 19, the site reported rumors surrounding the 2022 movie The Flash. Due to the movie's premise of multiverse travel, FandomWire claims the producers "are approaching" actor Nicholas Cage "to briefly portray" his version of Superman from the canceled 1998 movie Superman Lives.

Furthermore, FandomWire reports that the movie will alter the multiverse. If successful in getting Nicholas Cage, The Flash will make Cage's Superman originate from the same universe that Michael Keaton's Batman comes from. In other words, 2022's The Flash is poised to give some long-overdue expansion to an existing DC universe.

The Death of Nicholas Cage's Superman — It is popular lore that in the mid-'90s, Nicholas Cage was to play Superman in a movie from Tim Burton and writer Kevin Smith, at the time a Hollywood darling after the success of his indie hit Clerks. It was titled, almost ironically, Superman Lives.

As chronicled in the in-depth 2015 documentary The Death of Superman Lives: What Happened?, directed by the late Jon Schnepp, Tim Burton's movie would have been a loose adaptation of the 1992 story The Death of Superman, when DC killed off Superman in a fight with Doomsday before bringing him back to life. For a variety of reasons, the movie did not get off the ground.

It is not so strange that Nicholas Cage would have been Superman. The National Treasure and Ghost Rider star is a professed comic book fan, his stage name is lifted from Marvel's Luke Cage, and his second son is named Kal-El, Superman's Kryptonian birth name. In 2002, the actor auctioned off his vintage comic book collection for $1.6 million. And in 2018, Cage finally fulfilled his dream playing Superman in the animated movie Teen Titans Go! To the Movies.

Why The Flash may include Nicholas Cage's Superman — As reported in the weeks leading up to the summer event DC FanDome, the 2022 movie The Flash will innovate superhero movies by featuring cross-generational crossovers. Already reported are actors Michael Keaton and Ben Affleck reprising their respective versions of Batman.

Loosely inspired by the 2011 story Flashpoint, The Flash will involve Barry Allen (Ezra Miller) rewriting timelines and visiting parallels Earths that make up the DC multiverse. This includes meeting Michael Keaton's Batman in a yet-to-be-revealed capacity.

Because The Flash is all about exploring the DC multiverse, it's possible for Ezra Miller's Flash to meet other popular DC superheroes from across movies and TV. So it's not impossible for The Flash to feature Nicholas Cage's unmade Superman, even for just a quick cameo role. Whether it will happen is dependent on Cage's availability and willingness to play the role. In a 2018 interview with Variety, a curt Nicholas Cage shot down any possibility of playing Superman.

The Inverse Analysis — At the moment these rumors are very much just that: Rumors on the internet. While official reveals of The Flash have been surprisingly open and honest about including Michael Keaton and Ben Affleck, plans for other DC superheroes to appear in The Flash are very much up in the air and dependent on actor availability — and yes, money.

It may be true the producers of The Flash have approached, or are approaching, Nicholas Cage to play his Superman. But Cage could easily turn the offer down or have a scheduling conflict that keeps him from boarding the project. Either way, nothing is known for sure until Cage is finally seen on set, full costume on, and cameras rolling. Only then will fans know for sure if Superman lives.