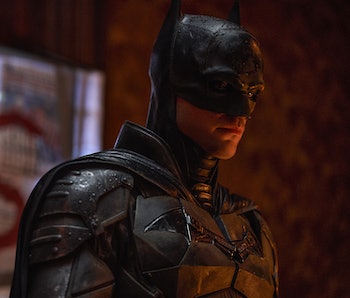 The sun rises in Gotham City, but that doesn’t mean the story of Batman is over.

At the end of the movie, the Riddler is thrown in Arkham Asylum, but his cellmate, one might say, is a barrel of laughs.

Here’s what the ending of The Batman is all about, how it sets up a sequel, and whic major comic book runs could give forward-looking fans a clue as to what’s next in DC’s Earth-Two.

Warning: Spoilers for The Batman ahead.

The Batman ending: A flood in Gotham City

At the end of The Batman, the Riddler’s ultimate scheme is revealed: Flood Gotham City on the night of a major election, and above Gotham Square Garden (yes really) assassinate the new leaders with a collection of his most devout followers from the internet.

The plan goes off for the most part, but what the Riddler fails to account for is Batman’s sheer resiliency. The Batman manages to thwart the plan, though not without all of Gotham City flooding up to its neck in river water.

While Gotham is left to drain its streets, Batman rises to become a symbol of hope and resilience for the city rather than the fearsome, folkloric urban legend most citizens see him.

But as Batman himself warns in voiceover narration, Gotham City is still vulnerable. There are still those who seek to capitalize and accrue power amidst the power vacuum, which means Batman is needed more than ever. And Gotham will need its Batman because a new villain is about to break through the city’s cracks.

The Batman ending: The new Joker

While the Riddler and his dozens of Twitch followers were defeated, the Riddler may have a new ally. In Arkham Asylum, the Riddler’s cell is situated next to none other than the Joker, played by Barry Keoghan (Eternals, The Green Knight) in a cameo appearance.

While Keoghan is caked in gruesome clown makeup and mostly concealed behind the tiny eyehole of a locked door, the cackling laugh of the Joker is unmistakable no matter what corner of the multiverse audiences are in. Over an exchange of dialogue, both the Riddler and the Joker scheme to team up and break out of Arkham and seize the opportunity to take Gotham for themselves.

A “post-credits scene,” in which the word “Goodbye” is typed out in green Riddler text, along with a cryptic question mark, says as much: This isn’t the end for this universe.

Director Matt Reeves has gone on record stating several different comics inspired his movie: seminal stories like The Long Halloween and Batman: Year One, authored by Jeph Loeb and Frank Miller respectively, are major touchstones for Reeves. The director also cites Batman: Ego from the late Darwyn Cooke, and that influence shows in Reeves’ vision of a decayed art-deco Gotham that is similarly found in Cooke’s comics.

But the ending conjures up several more obvious comic book influences. The scenario of a flooded Gotham City caused by the Riddler — a detail leaked on Reddit last October — brings to mind Zero Year, a major yearlong storyline in writer Scott Snyder’s memorable run on DC’s Batman comics (with artist Greg Capullo lending his talents to the vast majority of issues).

Designed to tell a new origin for Batman in DC’s then-new New 52 canon, the story shares all the same broad strokes of The Batman: A flooded Gotham City, the Riddler as the major mastermind, Batman in his earlier years, and a power struggle amidst those seeking to take control of the city.

Some of the finer details are changed, of course. Zero Year memorably introduced the character Duke Thomas, a young boy whose family aids Bruce Wayne in the immediate aftermath of the flood. Duke eventually grows up to become the Signal, another vigilante superhero and full-time member of the expansive Bat-Family. Sadly Duke isn’t anywhere seen in The Batman. Neither is the Red Hood Gang, a recurring set of minor villains in Zero Year.

The Riddler and Joker pairing up calls to mind another recent comic book storyline, albeit one with a considerably polar opposite premise. After Scott Snyder departed duties as Batman’s lead writer, The Vision writer Tom King took over as the series’ main writer and eventually introduced a stone cold classic of a storyline: The War of Jokes and Riddles.

Approximately a year into King’s stint, The War of Jokes and Riddles was told in the span of Batman issues 25-32. Framed as pillow talk between Batman and Catwoman (who at the time was mulling over marriage to Batman), the Dark Knight recounts a major moment early in his career when all of Gotham was at the mercy of both Joker and the Riddler. (Sound familiar?)

In a nutshell, The War of Jokes and Riddles begins when the Riddler, fresh from prison, tries to cheer up the Joker by scheming to take down Batman as a team. The Joker is a complicated fellow, however, and doesn’t actually want to end Batman. Nor does he want anyone else taking up all of Batman’s attention.

After Joker leaves Riddler on the brink of death, the two ignite a huge war in which all of Gotham City is left in the crosshairs. (I mean this literally, as both the Riddler and Joker hire rival assassins Deadshot and Deathstroke as part of their conflict in Batman #28, which in my opinion is one of the highlights of the entire saga.)

The story revealed some new dimensions to the Batman mythology. In short, Batman nearly committed murder by the end and was stopped by none other than Joker. The fact Batman “owed” Joker for helping him maintain this critical part of his identity weighed heavily on Batman ever since. Batman’s vulnerability to tell this story also leads Selina Kyle to agree to marry him, although we all know how that turned out.

What does this mean for The Batman 2?

It’s currently too early to know for sure what’s in store for Reeves’ Batman. As the DCEU continues to expand in awkward directions (we await what this year’s The Flash has in store), the universe of The Batman is primed to soldier on solo. There are already whispers of a sequel, with Reeves himself saying all parties involved have “started talking.”

For now, all we know is that when the sun rises in Gotham City, it’s only a matter of time before night falls again.

The Batman is in theaters now.