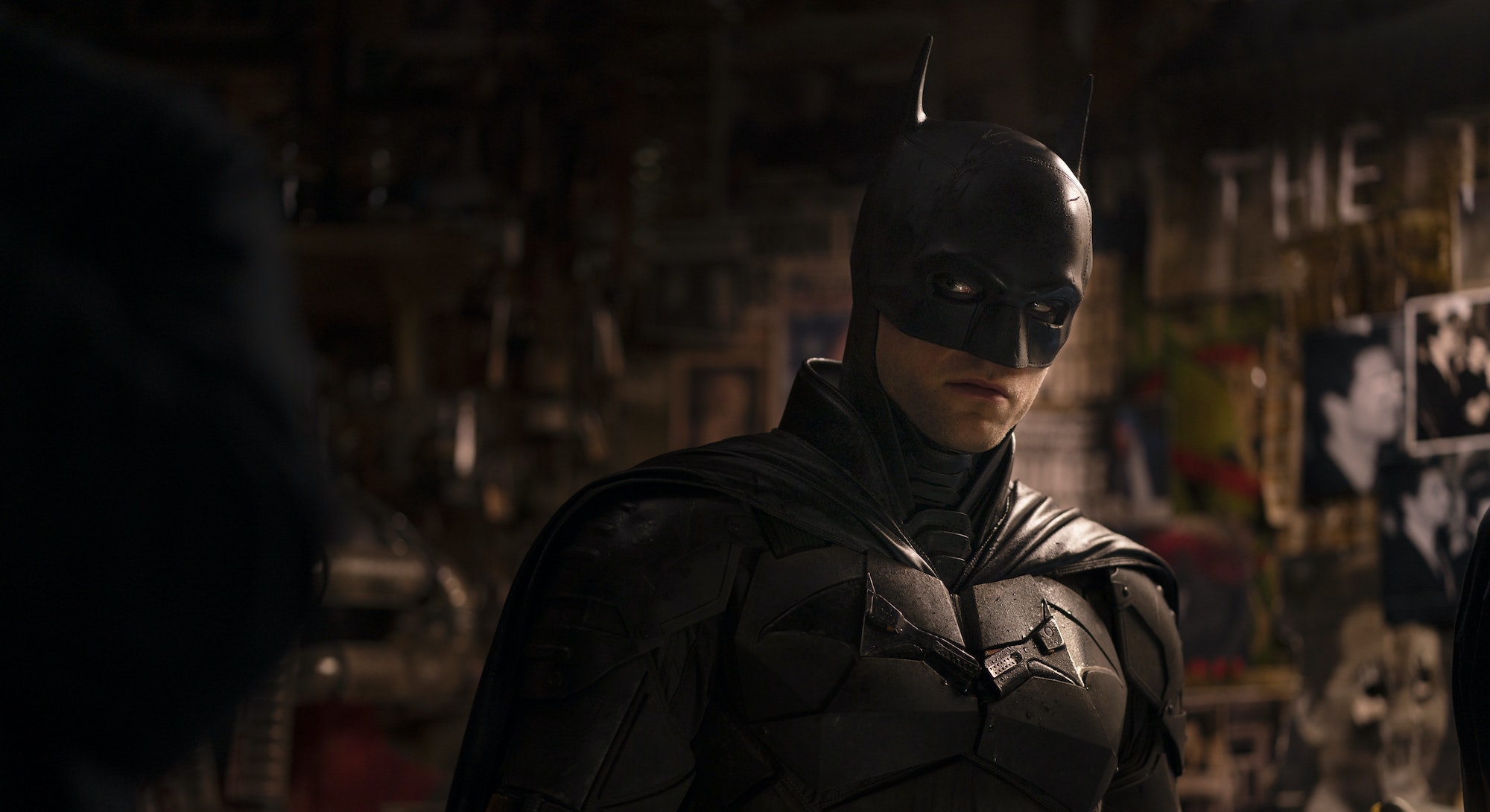 Engulfed in blue smog with a front grill glowing red, the Batmobile of Matt Reeves’ The Batman looks and moves like a terrifying demon.

Its rear muscle car spoilers evoke devils in medieval paintings, and the fiery blast of its engine roars like a biblical dragon. Behind the wheel is someone equally otherworldly: A fully transformed Robert Pattinson brings a freakish spin to an enduring DC superhero. You’ve seen gritty Batman before. But you’ve never seen gritty Batman like this.

Operatic, simmering, and replete with a smoky noir atmosphere, The Batman is an enthralling package of contradictions. It is in many ways the ideal amalgamation of Batman and his 80-plus years of history; it’s a movie where his vengeance doesn’t negate the camp fun of a climax set in “Gotham Square Garden,” a gag practically ripped from the Adam West era.

In other ways, it’s subversive of popular notions of what the Dark Knight should be. See Bruce cake on black eye makeup, his leaner physique, and his royal botching of a dramatic escape. What’s been subtext in analyses of Batman — a calculating sociopath whose wealth can’t buy him resolution — is now all on the surface. And it’s the first time that Batman has ever felt dangerous.

The Batman will go down as another game-changer, with its unique take on an iconic hero that is more of a feral vigilante than a crusader.

The Batman is set in its own universe. From the jump, Reeves pushes back against the superhero industrial complex to leave out needless universe-expanding Easter eggs. In this canon, “The Batman” is a known entity with unknown capabilities. He has been a folk legend at work for two years. When his signal is in the sky, criminals shudder in dark corners and darker alleyways out of fear they’ll face the fury of the vigilante.

“I can’t be everywhere,” narrates Pattinson in the role of Bruce Wayne/Batman as he journals. With a straight face, he remarks, “I am the shadows.” Fear is an effective deterrent.

But Bruce Wayne suspects his efforts have done little to lift Gotham City from its apathy. What’s worse, he lacks the trust of Gotham and its people. Walking into a crime scene, he’s gawked at with suspicion by the police. Batman’s despair that his work’s been for naught is proven right by a string of high-profile murders, committed by cryptic mastermind Riddler (Paul Dano). The Riddler — whose eyes pop behind translucent glasses and whose first appearance is one of the scariest intros ever in a superhero movie — provokes Batman to seek the truth to his family’s legacy.

“What lends The Batman an air of danger is how eccentric its hero is.”

Joining Pattinson and Dano is Jeffrey Wright as Jim Gordon, a lieutenant in the Gotham PD who risks his badge by working with Batman. In makeup, an unrecognizable Colin Farrell plays the Penguin, a gangster club owner, while John Turturro is slick mafioso Carmine Falcone. Andy Serkis is the paternal Alfred, and Zoë Kravitz is bewitching as Selina Kyle/Catwoman.

It’s deceptively easy to dismiss The Batman at first blush. Thirty-five years after Frank Miller’s seminal The Dark Knight Returns, 17 years after Christopher Nolan’s Batman Begins, and six years after Batman v Superman, framing Batman through the gritty filter is hardly ingenious. What’s more, The Batman’s obvious comic book inspirations, from The Long Halloween to Hush to recent tales by Scott Snyder and Tom King, all tap into the same well of “dark.”

Matt Reeves’ specific modulation feels more lateral to that than progressing forward. But like the visible stitching on Pattinson’s cowl, Reeves’ potent impact as an artist is in the details.

Reeves’ vision of Gotham City is textured, not sprawling; the story unfolds over just a handful of locations, which lends The Batman an unusual feeling of containment. It’s a place soaked in rain, as though nature itself wants to wash away the grime. Here, the most famous city in comics sits between Nolan’s sleek Chicago and Tim Burton’s gothic graveyard, once described as “hell erupted through the pavement.”

In The Batman, Gotham City isn’t hell so much as it is purgatory. It’s a damned place crowded with bodies and empty of ambitions. Even the more benevolent politicians have ulterior motives, and they’re always in someone else’s crosshairs. (The Batman also sports one of the most regionally specific Gothams ever put to screen, with its large ensemble of characters speaking in various New York accents.)

“Pattinson may be the steamiest Batman yet.”

Reeves’ film is noir through and through; the movie is sandwiched with narration, and for once, Batman conducts real detective work, not simply sitting behind a beefed-up gaming PC doing all the work. But what lends The Batman an air of danger is how eccentric its hero is.

In defiance to previous Batmen, who rendered Bruce Wayne’s playboy lifestyle into an aspirational male fantasy, Pattinson plays things rough, jagged, and ascetic. This Batman isn’t living the old origin story, but he’s still young and angry. Pattinson is most evocative of Michael Keaton, whose approach to Bruce Wayne as a social recluse in Burton’s 1989 film was innovative and the least replicated.

Pattinson spends most of the runtime in costume as Batman. It’s a creative choice of Reeves, who argues that Batman is the true identity, and Bruce Wayne is the mask. That’s not a terribly original thesis — that was Batman Begins’ theory too — but how Reeves tells it is no less compelling.

Despite the absence of an active love life, Pattinson may be the steamiest Batman yet. Though there is nothing explicit, The Batman’s abundance of leather and moisture oozes eroticism within the boundaries of PG-13. Reminiscent of the “Bat/Cat” romance seen in Tom King’s comics, Kravitz and Pattinson are magnetic as a couple, their bodies close but their principles islands apart.

Like its subject’s gunslinger-like gait as he strides towards the camera, The Batman is methodical and deliberate. It wields the might of a thermonuclear detonation in the delicacy of a poison needle. The movie boasts some of the most exciting action set pieces ever constructed, plus plenty of tense and euphoric moments. Nevertheless, it is a movie that focuses more inward than outward. Even the movie’s stirring climax, powered by a literal shot of adrenaline, underlines its core idea: This Batman is totally unlike any iteration of the hero you’ve seen before.

The Batman is many things — gripping, funny, and scary, as well as overlong and overly plotted — but it is primarily a complete reinvention of an icon that, through sheer will, shows why this character Batarangs back to our screens the most.

The Batman opens in theaters on March 4.