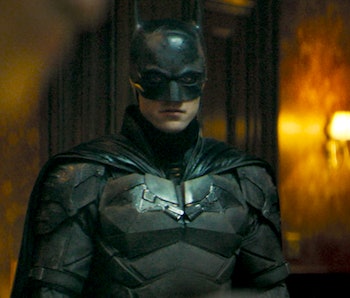 How do you make a character who has already been played on-screen by at least four different actors still feel unique and compelling?

That’s the problem writer-director Matt Reeves and star Robert Pattinson have to overcome with The Batman. Fortunately, it looks as though Pattinson and Reeves’ new take on the Caped Crusader highlights aspects of him that haven’t been explored as deeply by previous silver-screen iterations of the character, including his obsessiveness, intellect, and brutality.

At least, that’s the vibe the first trailer for The Batman gave last year, and a new audio clip from the highly-anticipated superhero flick only further zeroes in on the character’s darkness.

Unlike Ben Affleck or Christian Bale’s Caped Crusaders, Pattinson’s Batman doesn’t add much of an effect to his voice when he's wearing the cowl.

Instead, in both this clip and the film’s first trailer, the actor just opts to keep the volume of his speaking voice low, which allows the slight shakiness present in his line delivery to perfectly communicate the intense anger bubbling within the character.

It’s a subtle but effective choice — one that only further highlights the raw, unrestrained side of the film’s younger take on the character.

An Ominous Warning — In anticipation of the DC FanDome event this coming weekend, which will feature the debut of the second official trailer for The Batman, Warner Bros. has unveiled a brand new teaser for the film.

Only six seconds long, the teaser shows the film’s version of the Bat-Signal bathed in red light while Pattinson’s Bruce Wayne says, “It’s not just a signal; it’s a warning.”

Vengeance Incarnate — Much like his “I’m vengeance” line in the film’s first trailer, Pattinson’s remark here about the Bat-Signal just further sets up his Batman to be one of the most brutal rageful versions of the character that has ever been brought to life on-screen.

That’s an exciting prospect, especially considering that the film will also supposedly be a full-blown noir detective flick, which should give it the room to explore the character’s anger and bitterness as well as his intelligence and obsessiveness.

In case the film’s first trailer didn’t already make it clear, Pattinson’s American accent sounds pretty solid here as well. Of course, that won’t come as much of a surprise to anyone who has already seen his performances in films like Good Time and The Lighthouse.

The Inverse Analysis — Obviously, there isn’t much to talk about or break down with this clip. Still, it offers another interesting glimpse into both the tone of The Batman and the mental state of its titular hero.

Fans will, however, have a lot more to discuss and obsess over when the new trailer for The Batman premieres on October 16 during the DC FanDome event.

More like this
Entertainment
Feb. 1, 2023
The Batman: Part II — Everything we know about the Robert Pattinson sequel
By Gabrielle Bondi
Entertainment
16 hours ago
Everything You Need to Know About DCU’s Batman: The Brave and the Bold
By Mónica Marie Zorrilla
Entertainment
Feb. 2, 2023
DC Is Finally Putting Robin in a Batman Movie. It's About Time.
By Eric Francisco
LEARN SOMETHING NEW EVERY DAY.
Related Tags
Share: