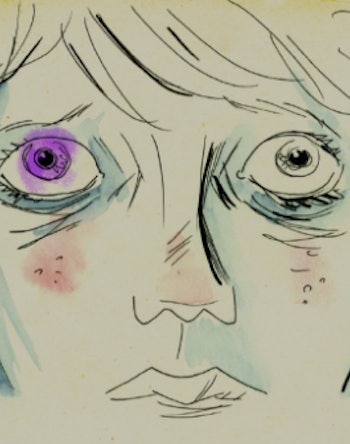 Scott Snyder is probably best known for writing Batman for DC’s New 52 movement, but he began his career writing prose. His work on stories like American Vampire and Batman have been praised for demonstrating a novelist’s approach to the material. Now, he returns to prose fiction in a new hybrid comic book called A.D. After Death, which combines the author’s long-form prose with Jeff Lemire’s vivid illustrations. The book explores Snyder’s intense fascination with death.

“I kind of struggled with depression and anxiety at different points in life,” Snyder tells Inverse, “and the sort of grounding anxiety for me really has to do with the brevity of life, the sort of prevalence of indicators of how fast everything is going all the time. So Jeff [Lemire] was like, ‘Dive into it and write about it.’”

Snyder spoke with Inverse on the phone about the experimental comic’s focus, and his process of working through internal worries.

Dealing with such a personal topic, I can only imagine that writing it must have been somewhat terrifying at some points.

Honestly, back in the spring, I wasn’t sure that it was a book that I was going to finish. We had a death in our family, someone in my wife’s side of the family, and it just made me uncomfortable, honestly, to write about it. Jeff was great. Through it all, he’s been extremely supportive and encouraging. I’m very proud of the project both as a testament to our friendship and also just to his bravery as a creator.

I mean, he’s always writing about his own anxieties, whether it’s Underwater Welder or Essex County and putting on full display a lot of his own vulnerabilities. I’ve never really had a place that was fully mine to do that, except in prose, because in comics I always have to rely on an artist.

We’re going to donate a good portion of the proceeds to Creators for Creators at Image Comics, which is a program I think is just terrific. It’s run by a board of creators, Brian K. Vaughan and Matt Fraction and Kelly Sue DeConnick and Nick Dragotta and others, who help fund projects by creators that are doing really progressive and interesting work in the indie world.

There are stories now about high-profile people in our own society who have gone public talking about cheating death or living forever. Is that something you looked into when researching for the book?

Yeah, I did quite a bit of research about it, actually. It’s kind of terrifying. In some ways, we’re very close. There are experiments with lab animals from mice and beyond that have been effective in terms of extending life span 30 percent and so on, and then there are other experiments with immortal jellyfish, all kinds of strange materials that seem to be effective in different ways and CEOs that inject themselves with young blood, and all kinds of — it’s really fascinating how almost at once cutting edge and almost cult-ish it is.

With Google and Facebook and all these major corporations looking into life extension, it just got me thinking less about the sort of horror, sci-fi element of what could go wrong, and more about the moral implications. Not even in terms of using human material, but … what would it mean to take yourself out of the living system of things, to have your story be cyclical and to be completely singular and not be a part of the larger story of humanity in a way?

In the zeitgeist at least, there’s this fear of being part of a connected and large story and the desire almost to retreat and protect oneself. I think the obsession with life extension feels somehow a corollary to that, at least for me. The idea that if you give yourself over to the bigger narrative and the bigger tapestry of things and say what makes life meaningful is the ways in which it remains mysterious. You’re just a word in a full sentence, and you might not ever see the rest of it.

How did you approach this differently than your previous works?

I think, sometimes, you forget, because it’s so comfortable doing superhero comics that it becomes kind of muscle memory. You think, “Oh, five pages in, I need a big action sequence. Page 20, I need a cliffhanger.”

Comic books always have such a weird relationship with death. None of the characters who die are ever really gone. Is that related to what you’re doing here?

That’s a great question. I think superheroes make you brave in the face of your deepest fears. So writing Batman, the only way to be able to write those characters without being completely paralyzed with fear because they’re so intimidating and so many better writers have done them before you, is to be able to imagine that you’re writing and creating your own book to them.

You pit them against things that you’re deeply afraid of. So for me, Batman is wrestling with his own mortality. In “The Court of Owls,” he’s up against a group that says, ‘We’ve been here a lot longer than you and we’ll be here after you. The city might know it right now, but it’ll be a mystery to you in five years, the same way ten years ago it would have been a mystery to you. You only exist for this brief moment.’ Then when he faces off with Joker, Joker says, “Oh, you have all these children now, you’re getting older. I know there’s part of you that wishes you could go back and just be that young, fast Batman the way you were with me, so let me kill them all for you so it can kind of fulfill your fantasy.”

The odd thing about dealing with death I think in superhero comics is Batman will always be reborn — you kill him, you know he’s coming back. Death never holds. But that said, I think there’s still tremendous opportunity, I’ve learned, to sort of work through fear of mortality or fears of whatever sort of keeps you up at night through these kind of larger-than-life characters. They’re really just projected onto this huge stage. I’ve tried my best to work through some of this material with superheroes without making it too grim and too on the couch. Nobody wants to see Batman on the couch.

Ultimately, a character like Batman in particular — we did a story called “End Game” with the Joker. The lesson in it really is that what makes Batman special is that he can die and he is mortal, even if the character himself never will actually die. Bruce Wayne has the option to become immortal many times over through magic, through all kinds of things I’m sure he could find in the cosmic DC [Universe], but he always chooses to be somebody who falls. It’s a tragedy, that story.