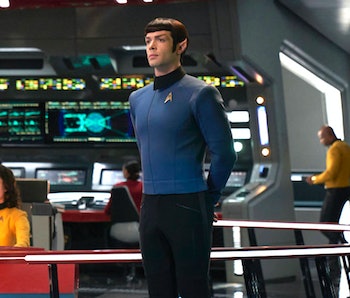 Captain Pike is ready to hit it. After almost two years of speculation, it looks like the first trailer for Star Trek: Strange New Worlds will arrive in a few short weeks.

A major announcement concerning Star Trek Day 2021 suggests that revelations for the Trek franchise are coming soon, including a first look at this highly-anticipated new series.

What is Star Trek Day?

September 8, 1966, marks the debut of the first aired Star Trek episode in the US, which was “The Man Trap.” Although this episode was the fifth to be filmed, it aired first on September 8 (and a day earlier in Canada!).

Starting in 2020, CBS and Paramount created a more formal celebration, Star Trek Day, to take place on September 8, which consisted of several virtual panels, each one focused on a different Star Trek TV series.

In 2021, though, this event will be broadcast live from Skirball Cultural Center in Los Angeles. It will consist of six panels, focused on Prodigy, Discovery, Strange New Worlds, Lower Decks, Picard, and a “Legacy” panel that will pay tribute to The Original Series, The Next Generation, Deep Space Nine, Voyager, and Enterprise. A slew of Trek actors, writers, and showrunners are involved, including (but not limited to) Patrick Stewart, LeVar Burton, George Takei, Anson Mount, Ethan Peck, Rebecca Romijn, Wilson Cruz, Blu del Barrio, Ian Alexander, Gates McFadden, Noël Wells, and Rod Roddenberry (the son of Star Trek creator Gene Roddenberry).

The panels will air for free on the Paramount+ YouTube page, on Paramount+ itself, and on Twitch. During the live streams on September 8, Paramount+ will also promote its #StarTrekUnitedGives campaign, which spans multiple charities in support of “equality, social justice, the arts, and innovation.”

A Strange New Worlds trailer will change the game

Of all the Star Trek series, it’s likely the vast majority of Trek fans are the most pumped about Strange New Worlds, set just after Discovery Season 2 and before The Original Series.

We already know that Spock, Captain Pike, and Number One are the stars of this series, but we have no idea about the other characters. We know Babs Olusanmokun, Christina Chong, Celia Rose Gooding, Jess Bush, and Melissa Navia are involved and likely part of the Enterprise crew. But their characters’ identities are still unknown.

Showrunner Akiva Goldsman has also revealed that the uniforms and the look of the series will depart from what we saw in Discovery Season 2. Again, we haven’t seen anything in terms of what that might look like, though filming on Strange New Worlds has essentially wrapped.

So far, we’ve seen trailers for Discovery Season 4, Picard Season 2, and Prodigy. Lower Decks Season 2 is also airing, so one imagines that panel will include announcements about Season 3. That said, out of all the Trek series being featured on Star Trek Day, Strange New Worlds is the only one that hasn’t dropped a trailer.

And for that reason alone, not dropping a Strange New Worlds trailer on Star Trek Day would be highly... illogical.