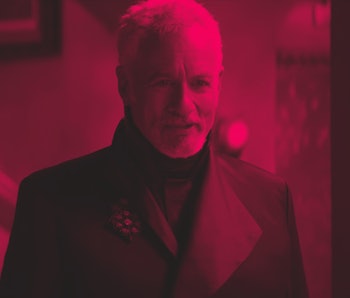 Q has broken the timeline. Or has he? In a just-released new trailer for Star Trek: Picard Season 2, one popular fan theory has been totally confirmed. Season 2 of Picard will deal with an alternate reality created by time travel shenanigans or some other kind of multiverse-bending events.

With the first in-the-flesh appearance of John de Lancie as Q since The Next Generation, Season 2 of Picard looks to be a huge departure from Season 1. This story isn’t grounded in Jean-Luc fighting for the rights of artificial lifeforms. This time, Captain Picard is fighting for what seems to the Star Trek version of their own sacred timeline.

Unlike the previous teaser trailer, which didn’t actually show us any new footage from Season 2, this trailer reveals quite a bit. In fact, nearly everything in the trailer is fixated on a new alternate reality. It’s possible that not one frame of this trailer actually takes place in the Prime Timeline at all.

From the very beginning of the trailer, Jean-Luc is wearing a strange kind of Starfleet emblem, a kind which we’ve never seen before. In another scene, Rios is also wearing a badge, indicating some kind of big political shift has occurred that seems to have changed the nature of Starfleet and maybe even the Federation.

What has Q changed in Picard Season 2

After Picard breathlessly searches for his Romulan housekeeper Laris, he comes face-to-face with Q.

“Welcome my friend, to the very end of the road not taken,” Q says.

Later in the trailer, a voice says “Time has been broken.” Picard replies, “We can save the future.”

In this alternate reality, the crew of the La Sirena appears to be subtly different, including the fact that Soji appears to be living on Earth, perhaps in relative comfort. Seven of Nine has lost her Borg implant, implying she was never assimilated in the first place. And again, the new Starfleet insignia look new, complete with some kind of new symbol inside of them.

Of course, we’re only assuming Q is responsible for the changes in the timeline. In the TNG episodes “Tapestry” and “All Good Things...” Q eventually revealed that Picard’s actions were what caused timelines to rupture, which seems like what’s happening here, too.

The biggest difference is that the changes are slightly more profound, at least on a narrative level. In “Tapestry,” Q showed Picard an alternate timeline where he was a junior officer and kind of a loser. In “All Good Things...” Q revealed a paradox that Picard created in the future, which prevented evolution on Earth. Both of these storylines were resolved within their respective episodes.

How Picard Season 2 raises the stakes

Seemingly, the entire focus of Picard Season 2 will be on undoing whatever has happened to change the timeline. (It’s unlikely Jean-Luc had a Sport’s Almanac stolen from him in 2399 and Quark used it to change the past, but you never know.) The first teaser trailer (the one without new footage) seemed to really linger on a model of the USS Stargazer, suggesting perhaps something in Picard’s past as the captain of that ship could have resulted in a radically different timeline for the Federation.

In one revealing shot, we see Picard in an admiral’s uniform, seemingly addressing the Federation. There are flags from Bajor and the Klingon Empire behind him. Is this the same version of the Federation we’re familiar with? Did Picard do something (or did Q lead him to do something) that resulted in a different Federation?

The answer to that question is almost overwhelming yes. What’s exciting is we don’t really know what exactly that is, yet. The rogue-ish Starfleet uniforms seem to imply some sort of fracture within Starfleet. But did that occur pre-TNG? Or perhaps somewhere in between TNG and Picard?

If Star Trek: Picard Season 2 spends the entire season trying to put the timeline back on track, one question you’ve got to ask yourself is: Will they actually succeeded?

The kneejerk answer is “yes,” otherwise Trekkies would riot. But the more interesting answer is, what if this is the new Star Trek timeline?