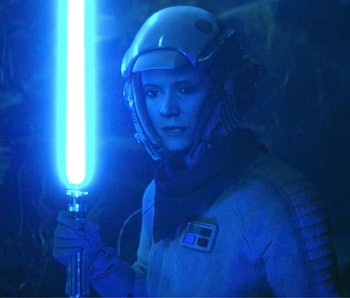 In The Empire Strikes Back, Yoda made it clear the fate of the galaxy did not rest on the heroism of Luke Skywalker alone. He doubled-down on this in Return of the Jedi, when his dying words were "There is another... Skywalker." Yet, ever since then, Star Wars has shied away from Leia getting full Jedi status. From on-again-off-again training in the old Expanded Universe to her retroactive decision to quit being a Jedi in The Rise of Skywalker, Jedi Leia has always been something Star Wars hasn't ever fully committed to.

This week, some old concept art has resurfaced that has us thinking about the unrealized promise of Jedi Leia all over again. The game Star Wars: Battlefront 4 would have seen a variety of non-canonical versions of familiar characters, including a full-fledged young Jedi named Leia. Why is it so hard for Star Wars to make this happen? Mild spoilers for The Rise of Skywalker ahead.

Long before Star Wars fans expected actual sequels to Return of the Jedi, the notion of Leia as a Jedi Knight was common enough to be a foregone conclusion. In fact, the quasi-canonicity of the concept was so widespread that fantasy author Lev Grossman pitted Movie Leia against Book Leia in a cage match for the back in 2014. But the Book Leia he imagined is no longer canon. (And perhaps, never was.)

The leaked Battlefront 4 art indicates that Lucasfilm was at least toying with the idea of Jedi Leia being a playable character in a contemporary game. This isn't as good as Leia being a full-on Jedi in the new films, but it would have been nice.

The concept art isn't like the brief flashback in The Rise of Skywalker, but a total reimagining of the character. Yours truly once argued in an essay that Return of the Jedi would have been the moment to start expanding Leia's Jedi powers, particularly because she's so pivotal during the Battle of Endor. Seriously, why not have Leia use the Force in Return of the Jedi? It makes almost no sense. We're told Leia has the potential to have the same power as Luke, but it took Rian Johnson in 2017 to have the guts to actually depict that on screen.

Prior to that, Leia's Jedi training existed inconsistently in the old Expanded Universe books and comics. Timothy Zahn's first trilogy of Star Wars novels (the "Thrawn Trilogy" from 1991-1993) includes Leia's Jedi training. She even has her own lightsaber. By the time of the comic series Dark Empire (1991-1992), Leia isn't carrying her lightsaber with her, and just picks one up from a homeless Jedi on the moon of Nar Shaddaa. Later, she uses a different saber to challenge a cloned Emperor Palpatine (sound familiar?) and turn Luke Skywalker back to the Light side. From that point forward, Leia as a Jedi was something the books and comics explored with mixed results. Sometimes it seemed like Leia was too busy being a politician to be a Jedi. And other times, her lightsaber-swinging skills were essential.

Contemporary canon hasn't done a whole lot to fix this. If anything, it's made it worse. Again, other than sensing Han's death in The Force Awakens, Leia doesn't really exude any kind of Force powers. Some of this is explained by the in-canon novel Bloodline, which suggests Leia downplays her Force powers after the public learns she's Darth Vader's daughter.

Yet, by The Rise of Skywalker, we're just told that Leia has Jedi Master proficiency with the Force, even though we're never allowed to see it. Some of this isn't anyone's fault. It seems very reasonable to assume that had Carrie Fisher lived, that we might have seen a more active lightsaber-wielding Leia in Episode IX. (Though, that's mostly speculation.) Meaning, any way you lightsaber slice it, Leia's Jedi powers have been relegated to flashbacks, non-canon materials, and a few scenes in the sequels.

If Star Wars: Battlefront 4 had created a playable Jedi Leia character, the Force-sidelining of the Princess from Alderaan wouldn't have been corrected in actual canon. But, for those of us who longed for an entirely alternate version of Star Wars, in which Jedi Leia became more prominent, these images provide a window into what could have been. Not a revision of Star Wars, but just a few more brief moments of Leia swinging a lightsaber, as she always should have.