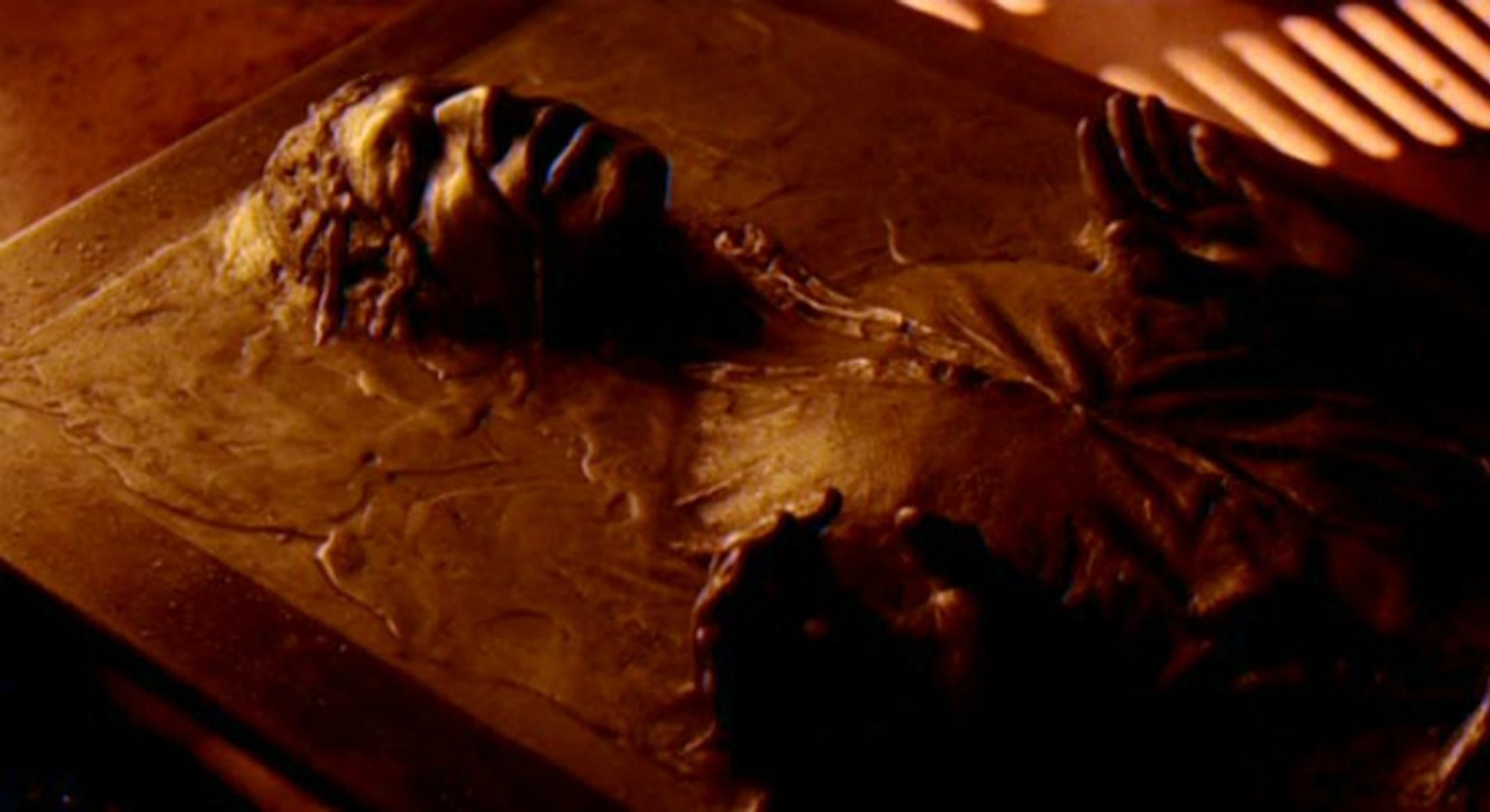 You don't have to be a die-hard Star Wars fan to remember the scene in The Empire Strikes Back where Han Solo is frozen in carbonite.

Out of eleven movies and countless TV episodes, cartoons, video games, and comic books, it remains the most gut-wrenching scene in any Star Wars story. It's also the most important scene in Empire Strikes Back. Sure, Darth Vader's big reveal is big too, but the carbon freeze sets everything in motion for Return of the Jedi. It's also the moment where Han and Leia admit their true feelings for each other — even if one of them famously says "I love you," and the other one says something else.

But what was Han going to say originally? And when was that line changed? Here's your answer, among five shocking details about the most important scene in The Empire Strikes Back that you definitely didn't know.

5. Irvin Kershner rewrote the scene on-set — The entire carbon freeze scene was rescripted at the very last minute, but not the way you think. While some fans believe it was pretty much the same, save for a last-minute ad-lib from Harrison Ford (we'll get to that in a second), the reality is Empire Strikes Back director Irvin Kershner rewrote the beginning of the carbon freeze scene for several reasons, the least of which had anything to do to with Leia and Han's romance.

Throughout the shooting of The Empire Strikes Back, publicist and journalist Alan Arnold was given seemingly unlimited access to the set of the film, which included, on several occasions, putting a body mic on Kershner and recording several of the conversations the director had with the actors. These transcripts make up a huge part of the book Once Upon a Galaxy: A Journal of the Making of The Empire Strikes Back, published in 1980 and fully authorized by Lucasfilm.

It's in Arnold's detailed transcripts of what people actually said on the day that the carbon freeze chamber scene was changed at the last minute, but it was way more than one line.

4. Why were they there, anyway? Kershner's biggest motivation for "fixing" the carbon freeze scene was that he was worried there was zero explanation offered as to why Han Solo was being frozen in front of Leia and Chewie. The director was concerned the audience had no idea what Han, Leia, and Chewie knew of Lando and Vader's plans at that moment in the story.

According to the transcripts from Once Upon a Galaxy, the shooting script as written offered no dialogue to clear this up. Nor did it really explain why Han, Leia, or Chewie were there at all. Kershner explained the issue to Harrison Ford as follows:

"You see Harrison, one thing I discovered that is going to affect us crucially is the fact that you [Han] have no way of knowing that you are the one they are going to put in the carbon freeze. They bring all three of you in. But you don't know anything."

Essentially, Kershner discovered a plot hole in the movie he was shooting and quickly workshopped the scene with Ford to fix it. In the final film, Han's line is simple: He turns to Lando and says, "What's going on... buddy?" This gives the rest of the cast a chance to react with some helpful exposition, but it took Ford, Kershner, and Billy Dee Williams quite a bit of spitballing to get to that point.

3. Oh, and those other guys too — Again, you probably never thought about this, but Vader demanding that Leia, Chewie, and C-3PO are all present to watch Han's carbon freezing moment is a little strange on paper. Sure, it's a great scene, but an explanation for why there needs to be an audience for Solo's big moment isn't clear in the script.

In that same brainstorm with Ford, Williams, and Carrie Fisher, Kershner decided those characters were there to keep Han Solo from flying off the handle. Here's Kershner talking to Ford in Once Upon a Galaxy:

"I know why they [Leia and Chewie] are brought in. It came to me last night. They are brought in so you [Han] don't make problems...if you try to do anything...they'll kill Chewie and Leia, too."

2. Carrie Fisher wanted to slap Lando — When you look at what happened right before this famous scene was shot, it's clear Fisher was initially cut out of the process. While Ford and Kershner did discuss Han Solo's "I love you" response, the most controversial aspect of these changes was that Fisher was unsure what Leia's whole response to this new information was supposed to be. Kershner should have brought Fisher in from the beginning of this ad-hoc spitball, but he didn't. So she called him on it.

Here's a glimpse of how it went down. Again, from Once Upon a Galaxy:

That's right. After being cut out of a last-minute workshop, Fisher's response was to slap Lando.

1. That ad-lib wasn't that spontaneous — This is the big one. When Princess Leia says, "I love you," Han Solo very famously replies, "I know." There are a lot of stories of how this particular line was created, but the only thing we know is that "I know" certainly wasn't in any version of a shooting script, ever.

Hardcore fans probably know that already, but the big twist is that there are two different versions of the behind-the-scenes story. In one version, Ford comes up with "I know" as the cameras are rolling. The slightly more credible version is that he came up with it beforehand, and Kershner was well aware of it.

Unlike some of the Lando dialogue just prior to this moment, everything about this scene was written pretty much the same as what we saw on screen, with one major difference. Leia says "I love you" and Han says "I love you, too." Or, in some versions, he says, "I'll be back." Or, according to Star Wars: The Annotated Screenplays, in the third draft of the screenplay, Han says, "Just remember that, 'cause I'll be back."

The Annotated Screenplays also contains a very long anecdote from Kershner which really makes it seem like he and Ford were just vibing while the cameras were rolling and Ford just randomly said, "I know," after several gazillion takes.

"We tried it again and again with different lines and finally Harrison says, 'I give up, I don't know what the hell to say.' Finally, Harrison says, 'Let's do it one more time and that's it.' So she says 'I love you, and he replies, 'I know.' And it just came out of him and I said 'Cut!'"

Pretty cool story, right? There's just one problem. In those pesky transcripts recorded by an impartial third source, it seems like Ford workshopped the "I know" line with Kershner well before they got in front of the cameras.

Again, from Once Upon a Galaxy:

Harrison Ford: If she says, "I love you," and I say, "I know," that's beautiful and acceptable and funny.

Irvin Kershner: Right, right. You know what? I may keep Vader out of this until the end...

Boom! Right there, well before the cameras are rolling, well before this mythical ad-libbing, here is different evidence that suggests it was what Ford wanted to do "I know" all along. Granted, we're splitting Wookiee hairs here, but in one version of this story, Kershner gets to be a brilliant film director, who pushed one of his actors to ad-lib a brilliant line.

In this version of the story, "I know" was always Harrison Ford's idea, but it wasn't one that he came up with on the fly. He thought about it ahead of time. Meaning, Han Solo doesn't just do his best work at the very last minute. Sometimes he actually has a plan.