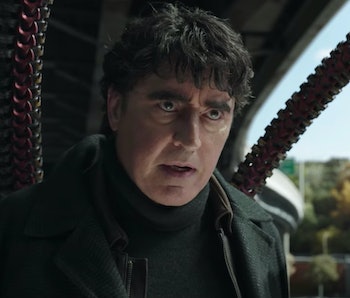 Well, the solution to that problem may have something to do with none other than Alfred Molina’s Otto Octavius.

The Multiverse is Real — Over this past weekend, Sony unveiled a handful of Spider-Man: No Way Home TV spots online. While the short teasers were all mostly comprised of footage shown in the second No Way Home trailer, they also featured some never-before-seen moments and scenes.

For instance, the TV spots show multiple new interactions between Molina’s Doc Ock and Tom Holland’s Peter Parker, including one moment when the former character has the latter pinned against concrete only to note that he’s “not Peter Parker.” Holland’s Spider-Man responds, “I am so confused right now.”

Altogether, the TV spots do more to establish the presence of No Way Home’s confirmed villains, including Doc Ock. However, the heavy focus on Peter and Otto’s highway fight raises questions about the role that Molina’s Spider-Man 2 villain will ultimately play in No Way Home.

That is to say: Will Doc Ock actually be a major villain in Spider-Man: No Way Home? Or will the film use his character in a much less straightforward way than it will, say, Willem Dafoe’s Norman Osborn?

Fighting Ghosts — The Spider-Man: No Way Home trailers have revealed that the film’s third act climax takes place at the Statue of Liberty and features Holland’s Spider-Man going up against the Lizard, Electro, Sandman, and Green Goblin. Many, of course, believe that Andrew Garfield and Tobey Maguire’s Spider-Men will also be present for the sequence, as will Benedict Cumberbatch’s Doctor Strange, Zendaya’s MJ, and Jacob Batalon’s Ned.

However, one character who seems to be curiously missing from the Statue of Liberty fight is Alfred Molina’s Doc Ock. Based on the footage we’ve seen so far, the fan-favorite Spider-Man villain doesn’t seem to be present for the film’s climactic setpiece.

On its own, that detail is enough to make Marvel Cinematic Universe fans suspect that Molina’s Doc Ock will not have as big of a presence in Spider-Man: No Way Home as its other villains. If correct, that would explain why the No Way Home trailers are focusing so heavily on Doc Ock and Peter’s highway fight, as the villain won’t be present for the film’s other action setpieces.

As for why Doc Ock ends up being absent from No Way Home’s climactic Statue of Liberty showdown, it’s hard to say. Of all the film’s villains, he seems to be the most aware of what’s going on, and it would be in character for him to decide to willingly return to his own universe sometime before No Way Home’s third act. Of course, it’s also possible he could simply choose not to join the film’s other villains, and that’s why — as far as we can tell — he’s not at the Statue of Liberty fight.

The Inverse Analysis — Alfred Molina’s Doc Ock was always more of an antihero in Sam Raimi’s Spider-Man 2 than he was a straight-up villain. So, it’d make sense for his character to have a different trajectory than the other villains in No Way Home.

Whether that means he does, indeed, end up returning to his own universe earlier in Spider-Man: No Way Home than fans previously thought remains to be seen. There are several different twists and reasons the film could ultimately give to explain the character’s absence from its third act fight. But it’s becoming increasingly clear that Molina’s presence in the movie will likely be most heavily felt during his introductory highway fight and his subsequent conversations with Peter, Ned, and MJ.

What his role in the film will be after Peter tries to save Spider-Man: No Way Home’s villains from their fates is unclear right now. But Marvel fans may want to start preparing themselves for the possibility that Alfred Molina’s Doc Ock will end up, once again, turning his back on his villainous ways in Spider-Man: No Way Home.