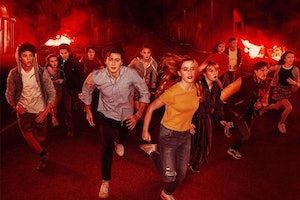 Shows for fans of unusual teens and trippy towns

Shows like 'Stranger Things': 11 supernatural dramas to stream in quarantine

There's no worse feeling than finishing a satisfying, full-season binge of your new favorite show, only to discover there's nothing left to watch. If you're finally catching up on Netflix's Stranger Things, this probably happened to you at the end of Season 3. Since there isn't much else to do, now's the perfect chance to check out some similar shows about teens balancing supernatural challenges with normal high school life — especially since Season 4 of Stranger Things probably isn't coming out anytime soon.

So here are 11 shows that have major points of overlap with Stranger Things. Hopefully, something here will scratch that itch while you're waiting for new episodes.

For fans who like: Family dynamics and kicking monster tail.

October Faction is one of those Netflix series you stumble across randomly and wonder why you haven't heard of it before. Fred and Delores Allen are your normal suburban parents... except they moonlight as hunters of the supernatural, working for a mysterious agency called Presidio.

Their twin children, Geoff and Viv, were supposed to be kept in the dark to protect them, but when mom and dad's secret comes to light, their double life becomes a family affair. Like The Americans meets Supernatural meets The Chilling Adventures of Sabrina, it's perfect for those who can't choose between thriller and family drama.

For fans who like: Unlikely friends forced together by a daunting enemy.

Before there were superhero shows, before there was even The Avengers, there was Misfits. This British show ran for five seasons on Channel 4, but somehow never broke it big in America. The premise is something right out of The Breakfast Club: five strangers, all wildly different, meet for public service duty as punishment for their misbehavior. The next bit is less classic: they get caught in a freak storm and develop unique superpowers.

This reluctant group of heroes must figure out how to use their powers for good and how to navigate their own conflicting personalities. Misfits ran for five seasons, so there's a good 40 or so episodes to enjoy. (For a British show, that's a lot!) Fans of Game of Thrones will be pleased to see Iwan Rheon (Ramsay Bolton) in a far less evil role.

For fans who like: Stranger Things's distinct writing style.

Matt and Ross Duffer, collectively known as the Duffer Brothers, serve as showrunners for Stranger Things. If you're interested in similar shows, their first foray into television was the shortlived Fox series Wayward Pines, a Twin Peaks-esque "spooky town" show that's pretty similar to Stranger Things.

Executive produced by iconic director M. Night Shyamalan, Wayward Pines follows Ethan Burke, a Secret Service agent, as he investigates the disappearance of two other agents in a remote town. It turns out to be more than he bargained for, and he's forced to negotiate prickly townspeople, a tyrannical sheriff, and even his ex.

The OA is Stranger Things for people who got really into Inception. Prairie Johnson reemerges after seven years missing, starts calling herself the OA, and collects a ragtag group to assist her in opening a portal to another dimension. This series, beloved by fans, was canceled after just two seasons, but the name of the game here is quality over quantity. Every episode is beautifully shot, making the show look more like a Scandinavian thriller than a Netflix series.

Fans of Stranger Things will appreciate the weird, trippy, parallel dimensions the coming of age issues explored through its characters. The show treads into some more difficult storylines, with trans actor Ian Alexander playing transgender teen Buck, who comes to terms with his identity. The OA explores human stories like his with respect while also providing a fantastical plot for the ages.

When Dark came out in 2017, it sparked a lot of references to Stranger Things. It was, after all, Netflix's first German-language original series, and there wasn't much to compare it to. However, Dark absolutely stands on its own two feet. The show follows four families in Winden, Germany as they hide their respective secrets.

One of those secrets is the reason why children keep showing up dead in the woods, but saying too much would spoil things. Just know time travel is involved, and Dark spans entire centuries in its storytelling. The series has two seasons up on Netflix, with a third in post-production set for release this summer. There's a solid English dub, too.

For fans who like: Kids taking care of business.

A high school class goes on a field trip, coming back to find all the adults in the town have disappeared without a trace. The Society combines teen drama with the trial and error involved in forming an impromptu government. Kathryn Newton (Detective Pikachu) shines in the lead role, and there's some gripping storylines involving young love, abusive relationships, and football players accidentally inventing socialism.

While Season 1 is totally worth the watch, be warned it ends on a cliffhanger that will leave you clamoring for another season... and it could be a long wait. Due to the coronavirus, Netflix has ordered a six to eight-week filming hiatus, meaning The Society Season 2 won't get back to filming until late May at the earliest.

Amid the Netflix Marvel shows (Jessica Jones, Luke Cage, etc.) and the upcoming Disney+ Marvel shows (WandaVision, Loki, etc.) there was one single Marvel series dropped onto Hulu: Runaways. This young adult series based on the comic book of the same name drew favorable comparisons to Stranger Things. The show follows six teens who discover their entire lives have been a lie, and they have to join forces to defeat a squad of villains known as the Pride. The twist? The baddies are their parents.

With all the action and superpowers of a Marvel movie and all the heart of a teen drama, this show is sure to fill a Hawkins-sized hole in your heart. Unfortunately, it was canceled after its third season, but there's at least a week's worth of episodes in its archive to tide fans over.

Available on: Hulu and Disney+

For fans who like: The 80's-ness of Stranger Things.

Netflix's latest foray into the "kids with superpowers" genre it more or less revolutionized with Stranger Things is I Am Not Okay With This, an adaptation of the graphic novel by Charles Forsman. The story follows Sydney, a teenager coping with the loss of her father when she suddenly develops telekinesis, but all of this seems to get in the way of the real obstacle of her life: adolescence.

Sophia Lillis has a star turn as Sydney, and the tone of the show is delightfully nostalgic – the showrunner is also known for The End of the F***ing World, another show with an 80's aesthetic. Take away all of the superpowers and it's basically a John Hughes movie. Of course, the superpowers take it that one step further and bring it into this century.

Netflix's Ragnarok is a Norwegian version of a classic young adult tale: a clumsy, unassuming student suddenly discovers he's The Chosen One and gains untold power to defend those he loves most. It happened to Harry Potter, it happened to Percy Jackson, and here it happens to Magne Seier.

When his family moves back to the mountain town of Edda, he befriends Isolde, a rebellious teen who's convinced there's an ecological conspiracy afoot. It ends up falling on Magne's shoulders to get to the bottom of it, and along the way he discovers supernatural beings in his own town.

With only six episodes released so far, it's a quick watch, but the excellent acting (and a particularly good English dub) make it totally worth it. It's especially interesting for its exploration of the intricacies of Norse mythology, which inspired the Marvel superhero Thor and countless more pop-culture riffs.

This underappreciated Marvel series aired on Freeform (a subsidiary of Disney property ABC) for two seasons. Cloak and Dagger is a "worlds collide" kind of show: Tandy and Tyrone are teens from very different backgrounds who develop superpowers. They run away from home and explore their strong bond while fighting crime with.

While the first season is used mainly to establish these characters and their relationship, the second serves as an excellent whodunit, while dealing with a vigilante known as Mayhem. Cloak and Dagger combines the best parts of a buddy-cop story and teen drama.

Available on: Freeform and Hulu

For fans who like: The comedic side of Stranger Things.

Eureka was a Syfy series that ran for five seasons from 2006-2012. While it's billed as a comedy, the show's fantastical streak keeps it memorable. It portrays a State Marshal who suddenly finds himself the sheriff of the secretive community of a small Oregon town and must deal with its population of genius scientists and oddballs.

Quirky is the key word here. In the late 2000s, Pushing Daisies-era of broadcast television, the bright colors and tongue-in-cheek comedy of Eureka were extremely en vogue. However, in today's age of gritty, dark, dramas, the cheerful aesthetics are the perfect palate cleanser between binges — like lemon sorbet, but with time travel. There's even an animated special, the true sign of a good time.

Oh hey! We've also put together a list of TV recs for Game of Thrones fans, which you can find here.