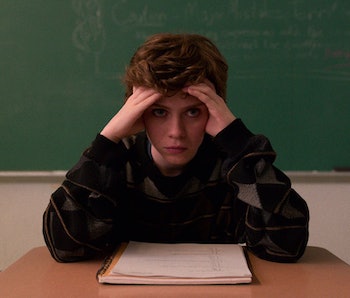 Netflix's upcoming series I Am Not Okay With This, an adaptation of the novel by the same name, blends supernatural elements with a familiar coming-of-age story. It's a return to a proven formula for Netflix following the massive success of Stranger Things. I Am Not Okay With This takes place in the present, though it shares Stranger Things' throwback aesthetic and references many classics of 80's teen-centric cinema. We've dissected some of the must-know Easter eggs below.

In the very first shot, we see our protagonist Sydney walking down a street covered in blood, an iconic image from Carrie. This is an obvious parallel for this show, there are only so many stories about high school girls developing telekineses.

Beyond that, we get a glimpse of how this story may end: bloodily. Whether that blood is from a bucket dumped on her at prom or the result of a revenge plot, we can expect Sydney's powers to result in a powerful, dramatic climax.

In the same "high school movie, but with murder" genre lies Heathers, the satirical dark comedy that epitomized the 1980s. I Am Not Okay With This and Heathers share a storytelling conceit-- the diary.

Veronica Sawyer donned a monocle and scrawled "my teenage angst bullshit now has a body count" into her journal, and Sydney's diary also becomes a vehicle for narration in the trailer. We can expect Sydney's voice to guide us through the series, allowing the viewer to become her confidante–and possibly expose her powers, if someone gets hold of what she's written.

At first glance, I Am Not Okay With This looks like an alternate-universe John Hughes movie, down to the fact star Sophia Lillis, veteran of playing younger versions of redheaded actors like Jessica Chastain and Amy Adams, looks like a young Molly Ringwald. The comparison is even offered by Netflix itself in the show's marketing, calling the show "like John Hughes made a superhero movie."

However, Sydney's dress and demeanor brings to mind another Hughes character: Allison, the self described "basket case" from The Breakfast Club. With this clue, and the fact Sydney describes her best friend Dina's boyfriend as a "golden boy," we can rest assured high school archetypes will play a role in the story.

Just like in Stranger Things, a school dance will provide a watershed emotional moment for Sydney, harkening to Hughes's classic Pretty in Pink, where Molly Ringwald plays Andie, a new wave-loving teen who DIYs her prom dress to win the affections of a boy.

Pretty in Pink is also renowned for its soundtrack, which could be a highlight of this series as well. Any trailer that shows a cassette tape playing is sure to include some glorious needle drops.

We seem to get that sort of a character in Stanley Barber, Sydney's oddball friend who insists on going barefoot. In the Hughes films, these characters tend to get sidelined for the "true" romantic interest, but hopefully the geeky best friend will get his due this time around.

I Am Not Okay With This comes to Netflix February 26.