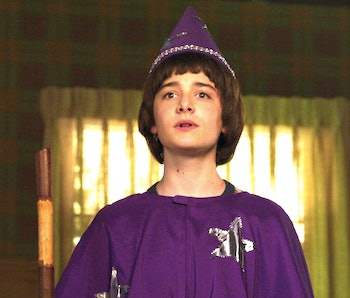 Production on Stranger Things Season 4 has finally begun. Our first glimpse at Season 4 was brief, but it does confirm that Hopper is alive and well, but stuck in Russia. While Netflix boldly revealed the identity of “the American” in advance, effectively cutting short any and all speculation on the subject, Stranger Things’ Noah Schnapp says the rampant fan theories were always “very close” to the truth.

A new teaser revealed that Jim Hopper was the much-discussed mystery man who appeared at the Russian base in the Season 3 post-credits scene. Considering that he didn’t die onscreen, most fans figured Hopper was still alive somehow. One theory even posited that he’d time traveled to the Russian base.

It's a bit underwhelming now that it’s been revealed, though it's fun to look back on which theories ultimately proved correct. Hopper was always one of the leading candidates for the American.

Ahead of Stranger Things Season 4, Inverse spoke with Noah Schnapp about the plethora of fan theories out there. Schnapp confirmed some of those predictions were "very close" to the truth, though sometimes fans dug a bit too deep.

"I always watch a bunch of theories on YouTube about the show and what they predict and a lot of them are always very close. A lot of them are kind of really wrong, too. Some people kind of get way too deep into it and say, 'Oh just because it was this time and this person and it means this,' and then some people are very close to what they think."

It's safe to say fans have a knack for figuring things out on Stranger Things, poring over the smallest of details to do so. Previous theories also suggested Dr. Brenner was the man being held by the Russians, which was another great idea and made sense within the scope of the show.

Though the evil doctor was eaten by the Demogorgon, we never saw a body. No corpse, no death. That's the rule in fiction. Speaking of supposedly dead characters, an entirely different theory posited that Billy Hargrove was the American, while yet another honed in on Alexei and even Murray Bauman.

Of course, knowing Hopper is the elusive American is just one piece of a larger puzzle. How he got to Russia and whether he'll escape remains a mystery, but leave it to fan theories to fill in the gaps in the meantime.

More like this
Entertainment
5.18.2022 7:00 AM
Stranger Things cast unpack a "quite metaphorical" Season 4
By Eric Francisco
Culture
5.18.2022 9:00 AM
Every Stranger Things monster from Dungeons and Dragons
By Robin Bea
Entertainment
5.17.2022 10:30 AM
Do we really need Black Mirror Season 6? Why the Netflix series has lost its edge
By Dais Johnston
Related Tags
Share: