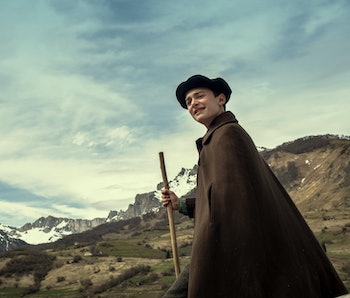 To Stranger Things fans, Noah Schnapp is best known as the sweet and unfortunate Will Byers, but before landing that breakthrough role, he starred alongside Tom Hanks in Bridge of Spies and voiced Charlie Brown in The Peanuts Movie. Fast-forward a few years later and Schnapp leads a cast of seasoned actors like Anjelica Houston and Jean Reno in Ben Cookson’s World War II drama, Waiting for Anya.

Schnapp plays Jo, a shepherd boy in the French village of Lescun. After a chance encounter with a Jewish man named Benjamin (Frederick Schmidt) — who fled the Nazis, but was separated from his daughter Anya — Jo decides to help Benjamin smuggle Jewish children across the border to safety in Spain.

Based on the children’s novel by Michael Morpurgo, Waiting for Anya hones in on the innocence of young Jo and his choices to do good, despite not fully understanding the brutal realities of war and genocide.

In an interview, Schnapp tells Inverse about Waiting for Anya, what called to him about the role of Jo, what he from his fellow cast members, and his plans for the future.

Waiting for Anya is much different than your role in Stranger Things. What drew you to the part?

There are many factors. It was really exciting because it was something different. It's a period piece set during World War II, which is something I've never really done before. It's also surrounded by this time in World War II, and I'm Jewish and my family is... I resonate with it a lot. I talked to my family about it and we were all really excited to do it. It also filmed in France, which was really exciting for me. So I decided to hop on board and try it out.

Director Ben Cookson spoke about the challenges of filming in such a remote location, and also about how passionate everyone was to make this movie. What was your experience like filming and leading an experienced cast?

It was amazing. I got to work with some really amazing actors. Anjelica Houston, Jean Reno... they taught me so much. It was really something else getting to work with them. During my career, I've gotten to work with a lot of really amazing actors and I'm really lucky. I feel like they all really teach me something important. They always surprise me because I'm always very intimidated by them and they're always very grounded, very nice, and normal. It makes my job a lot easier when they're good at what they do!

Have you read the novel that the film is based on?

Yes, I ordered it when they sent me the script, and it was a short little children's novel. I was kind of surprised at how it's kind of really directed at a young audience, but this movie's so deep and has such a heavy topic. I was surprised, but they turned the book into a more serious movie.

As a kid, Jo doesn't fully understand what's happening in the war, but he does his best to help where he can. He's a great example of what good people can achieve.

He just has a good heart and wants to do what's right, and he's like the hero of the story. He doesn't really care what people think of him. He just wants to help, and save these people suffering.

There was a real bear hired for filming, and it was part of one of your very first scenes. Did you get to shoot with the real one?

I didn't get to meet the bear. I asked if I would get to see it, but they were like, "Oh no, you don't know what might happen." So they didn't let me see it, and he was kind of in his own area and this little enclosure, but it was really cool seeing it after. But I never got to see the bear. It was all fake.

Do you have any other projects coming up that you can talk about?

I filmed an Adam Sandler movie last summer [Hubie Halloween]. It was a comedy and that was really exciting. It was something different that I've really never done before. I might be doing some stuff later before Stranger Things starts this year, but I don't know about that yet.

You've been keeping pretty busy between that and Stranger Things.

Yeah, it's great. It's nice to have some time off of Stranger Things, but I also really look forward to when we film on set just because it's like a family.

Do you want to do more drama in the future, or do you have another preference genre-wise?

I really love doing everything and trying out all the different genres. It's fun to do different things and not stick to one kind of niche.

Waiting for Anya is available to rent or own online.