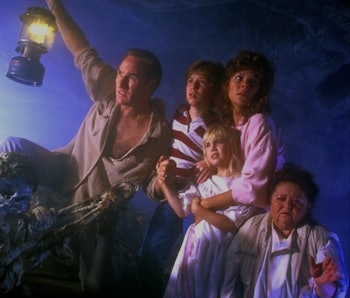 It’s nearly impossible to track all of the 1980s pop culture influences in Stranger Things. But, now that Netflix has announced a second season for 2017, the Duffer Brothers must figure out how to replicate their success without repeating themselves. Thankfully, interviews seem to indicate they’re on the right track.

It’s all because of Poltergeist.

The 1982 horror film directed by Tobe Hooper, from a story by Steven Spielberg, Poltergeist tells the story of the suburban Freeling family who are terrorized by a supernatural force that kidnaps their daughter, Carol Anne, and takes her to an alternate dimension called the “Other Side.”

Its not exactly the same as Stranger Things, but the influence goes beyond the obvious, like when the show’s Will Byers communicates from another dimension called the “Upside Down” through the house itself, just like Carol Anne does. Stranger Things even explicitly references Poltergeist in an early episode during a flashback when Joyce surprises her son with tickets to Hooper’s ghost story hit.

But more importantly, the Duffers have specifically called out Poltergeist and its sequels for the way they want to deal with the second season of Stranger Things, telling the LA Times, “Will goes missing is like [when] Carol Anne goes missing in Poltergeist and then you get Carol Anne back. That feels like a movie. In the sequels, you’re still following that family as terrible things happen, but it’s a different tension and characters are dealing with other things.”

It turns out there’s a lot — both good and bad — that Poltergeist II: The Other Side can teach us about the upcoming second season of Stranger Things.

Fallout From the Previous Movie/Season

The Spielberg and Hooper-less Poltergeist sequel picks up a year after the events of the first film, and that movie’s sprawling suburban utopia, called Cuesta Verde, is now in complete disrepair after the neighborhood was abandoned following the severe supernatural occurrences that happened there, culminating in the Freelings’ house imploding. The family has since relocated to Arizona to try and cope with the fallout from the first movie, but the supernatural forces follow them.

Stranger Things Season 2 is also set to pick up a year later, and focus on the town of Hawkins, Indiana coming to terms with what happened. While Poltergeist II narrows down to the Freelings, Stranger Things could take hints from the spooky sequel because there are actual ramifications to the traumatic experiences from what came before. Plus, The Duffers have promised Season 2 won’t all take place in Hawkins, and who knows if everybody stayed put?

What Stranger Things shouldn’t do is pull back the curtain on all of the carefully laid mysteries it set up in the first season, which is exactly what Poltergeist II does. Part of the awe-inspiring charm of the first Poltergeist is that it gives you enough of a hint at whats going on with the Other Side without having characters turn towards camera to dump exposition at you. In the same vein, we don’t need Hopper to suddenly stop what he’s doing in Season 2 and find some sort of report on the Upside Down in the Hawkins National Laboratory and over-explain everything about it. Why is Brenner doing experiments? Who cares, the mystery is more tantalizing than the truth.

The magician never reveals his secrets, and the worst tendency for sequels is to just take the unexplained from before and give it all away. This almost never works, and it’s always less fascinating.

The other serious sequel offense is to suddenly reveal new information that re-contextualizes the first movie in a dumb way. In Poltergeist, the creepy hauntings happen because a greedy real estate company built their new suburban settlement on an ancient Native American burial ground, but the sequel explains that it’s actually because an evil doomsday sect of settlers committed mass suicide in caves underneath where the Freelings’ house was built.

This kind of thing leaves the audience feeling duped regardless of whether the idea is organic or not. The challenge the Duffer brothers will have is revealing the backstory of how El became so messed up without completely pulling the rug out from under the mythology of the first season. Completely retconning the narrative is bad. Developing it is good. There’s a difference.

Poltergeist II tries to shoehorn a grandma Freeling character (Geraldine Fitzgerald) and even a Native American shaman named Taylor (One Flew Over the Cuckoo’s Nest’s Will Sampson) meant to take the place of clairvoyant weirdo Tangina Barrons (Zelda Rubinstein). They even personify the evil spirits through the eerily sinister leader of the evil sect, Rev. Henry Kane (Julian Beck). Adding new faces is boilerplate for a sequel, but if you go through the trouble of thinking up new characters you better make them as memorable as your original cast. Better yet, you need to make them assimilate into the fantastic story you’re telling as well.

The only problem is the characters in the Poltergeist sequel are tangential instead of essential. There are only rumors of who the new characters in Stranger Things are, but when they make it to the screen they better be there for a crucial reason.

The nature of sequels is they follow because the original was a hit. As such, they usually get bigger budgets and added pressure. Poltergeist II and Stranger Things 2 are no different. MGM threw nearly $10 million more at the Poltergeist sequel and it made $36 million less than the original through a mix of bad plot, questionable acting, relatively chintzy special effects, and the sense the story didn’t need a sequel at all.

Sequels are inevitable, and the danger is the Duffers seemingly created something out of the blue that was magical, and now everybody will be watching them to create something bigger and better. You don’t want to be a one-hit wonder because you forgot why people loved your work in the first place. Keep things in context unlike Poltergeist II and Stranger Things Season 2 will be a success.