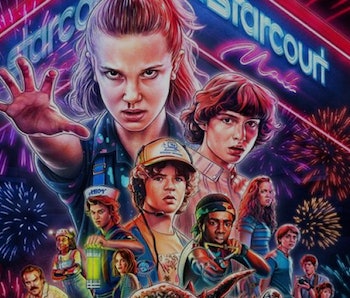 Ever since the third season of Stranger Things hit Netflix back in early July, fans have speculated about the identity of the mysterious “American” briefly referenced in the post-credits scene after the last episode. While there are two leading candidates for the mystery prisoner among fans and critics, two intrepid redditors have cooked up some unexpected, yet extremely convincing alternatives that might just turn out to be true in Stranger Things Season 4.

If you want to avoid spoilers for Stranger Things Season 3, you’ve come to the wrong place. On the other hand, if you already know what happens and just need a refresher on the scene, you can watch it here:

What Happens at the Russian Base?

The post-finale teaser takes place in a dank prison facility in the far eastern reaches of Kamchatka, Russia. This remote region of Siberia is known for its heavy rain and network of active volcanoes. The scene shows two uniformed Soviet guards intent on retrieving a prisoner from the cells. As they arrive at the first door, the trailing guard wags his finger and says, “No. Not the American.” We don’t see or hear anything from the inhabitant of that cell. The guards proceed to open the next door, dragging out a shaggy-haired Russian prisoner to be the Demogorgon’s shrieking dinner.

Hopper and Brenner Are the Leading Candidates

The prevailing wisdom among critics and Stranger Things fans has been that the American prisoner is either Jim Hopper (David Harbour) or Dr. Brenner (Matthew Modine). The Russians refer to Hopper as “the American” throughout much of Season 3, lending credence to this explanation. Hopper’s presumed dead after telling Joyce (Winona Ryder) to destroy the Gate to the Upside Down, and his heartfelt farewell letter to Eleven neatly caps off his story arc in the show. Bringing him back would diminish the dramatic impact of his sacrifice, and probably wouldn’t make a whole lot of sense.

Then again, Harbour is a huge star thanks to Stranger Things and it would be a big mistake to kill him off, right? Right?!

Brenner, who ran the Hawkins National Laboratory and raised Eleven (Millie Bobby Brown) under horrific conditions, hasn’t appeared in Stranger Things since the second season. Other than in flashbacks, we haven’t seen the evil doctor since he got mulched by the Demogorgon back in Season 1. But we never saw his corpse, which explains why Eleven hears Brenner survived from his former colleague.

Executive Producer Shawn Levy told Collider this was no red herring back in October 2017, stressing that “Brenner is alive, Brenner is out there.” Being locked in a Siberian prison would be a pretty good excuse for why we haven’t seen the guy in so long.

But assuming “the American” isn’t one of these obvious choices, who could it be? We’ve got lots of theories, but two recent ones have us even more excited for Stranger Things Season 4 than we thought was humanly possible.

Is Billy Hargrove “The American” in Stranger Things Season 4?

Billy (Dacre Montgomery) was a bit of a jerk from the moment he was introduced in Season 2, and he became even more of a dick after he was possessed by the Mind Flayer to become the big bad of Season 3.

Redditor u/Xanshue argues that Billy’s experience in the Upside Down, where he seemingly encounters a clone of himself, could be the key to this post-credits mystery. “Perhaps they somehow switched places and Billy escaped by creating a new gate… It would explain how that demadog was alive in the Russian lab as well,” they wrote.

Billy got speared in pretty spectacular fashion by the Mind Flayer in “The Battle of Starcourt,” so it’s hard to believe he isn’t very, very dead. But if that was just a clone, instead of the real Billy, that changes things. He also reacts differently than the Mind Flayer’s other victims in that he’s never shown melting into goo and absorbed by the creature like the other Flayed. Given that his body may have been relatively intact (if a bit punctured), it’s possible the remaining Russians in Hawkins retrieved and somehow reanimated him after the mall attack.

Could Mayor Kline Be the Prisoner in Stranger Things Season 4?

The smarmy Mayor of Hawkins (Cary Elwes) has been in cahoots with the Russians for some time, allowing the Red Army to conduct operations in its secret base under Starcourt Mall. Redditor JournalofFailure suggests Kline cut a deal with his Soviet buddies after everything went down.

“The tabloid-TV promo shows him getting arrested, but I propose that he somehow escaped and made his way to his Soviet handlers…who promptly shipped him off to Siberia. Kline ending up in a Soviet prison as Demogorgon food would be a most fitting ending for that asshole,” JournalofFailure speculates.

It’s obvious why Kline would want to get out of Hawkins: all his nefarious doings have been exposed, and he’s probably on the hook for some pretty serious charges. Evading justice by completely betraying the principles he espouses in public would also be pretty on-brand for the character.

That said, while the Red Army would probably get a kick out of feeding Kline to the Demogorgon for jokes, it’s not clear what he could do for them at this point to merit keeping him alive in prison. Hopper, Brenner and even Billy could be useful to the Red Army in some way, but that’s simply not the case with Mayor Kline.