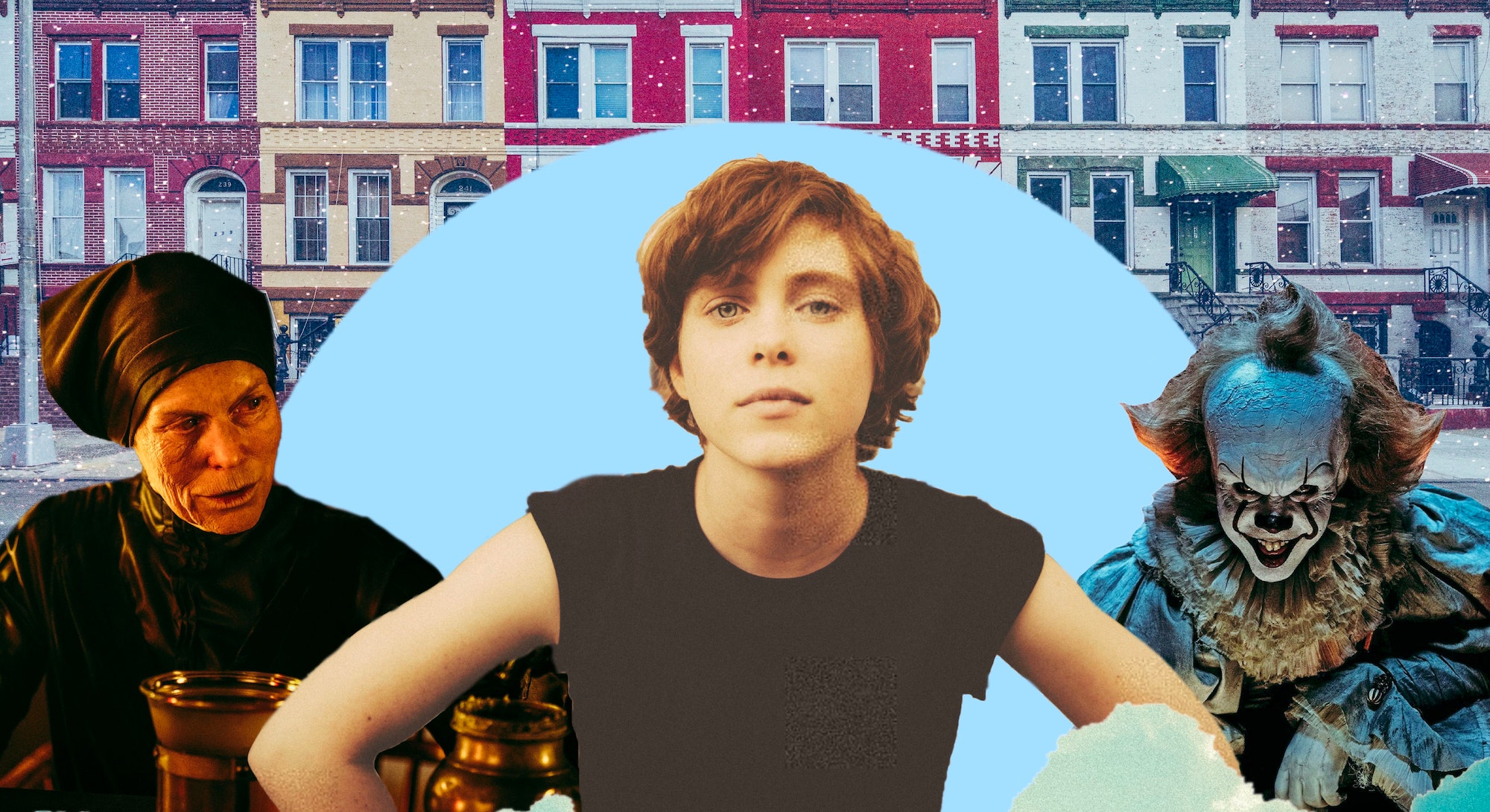 The late 2010s was an exciting time for horror fans.

Jordan Peele jumped from sketch comedy to creating some of the best scary movies in recent memory, while new voices like Ari Aster and Robert Eggers made horror exciting in weird, new ways. But at the same time, in an entirely different corner of the genre, a fresh talent emerged as the face of horror. A new scream queen to rival Neve Campbell, Jennifer Love Hewitt, and even Jamie Lee Curtis. Enter Sophia Lillis.

A Google search for the terms “Sophia Lillis” and “scream queen” bring up more than 25,000 results. The internet has spoken — even if horror movies have changed and screaming has fallen out of fashion.

“I think it's really funny that they're calling me that now,” Lillis tells Inverse. “Honestly, in all of these horror films, I don't scream a lot in any of them really. I'm not really a big screamer. So the whole scream queen thing — maybe I'm taking this a little too literally.”

Lillis might not have pipes like Curtis, but she’s got the talent. In 2017, the young actress from Brooklyn, New York, broke onto the scene in It at the age of 15. In 2018, she played a young version of Amy Adams’ character in the mind-bending HBO thriller Sharp Objects, and in 2019, she returned for It: Chapter 2.

Already in 2020, she’s starred in Gretel and Hansel and the upcoming Netflix original I Am Not Okay With This, where she plays a high school student developing supernatural powers she struggles to control.

That might all seem like a carefully charted path to horror movie stardom, but Lillis just sort of lucked into it. And while she didn’t start out as a devoted scary movie fan, it’s a genre she’s grown to love over the years.

“It just sorta happened,” she says. “I’ve found my love for it, though. It'd be sad if I didn't. I like horror. I really like how extreme it can be.”

Whether she continues with horror, it’s easy to see a future where Lillis succeeds. She has a charisma that’s tailored for the coming decade. Geeky but confident, shy but charming, Lillis commands the camera whether she’s the star, as she is in I Am Not Okay With This, or just one member of an ensemble cast, like in It.

“I think she's got the potential to be a great star. Full stop,” says Jonathan Entwistle, the showrunner behind I Am Not Okay With This and, before that, The End of the F***ing World. “She has the work ethic and the style and the look. It's just an old-school screen presence.”

In I Am Not Okay With This, Lillis plays Sydney, a troubled teen whose issues with romance, friendship, school politics, and her family all manifest themselves through scary, new psychic powers. Unlike your typical story where some friendly figure would show up to offer guidance, Sydney is totally on her own.

“What happens if Professor X never shows up to take you to the Academy?” Entwistle says, summarizing the plot. “Or if you grow up in a suburb of Pittsburgh and Hagrid never brings you to Hogwarts?”

I Am Not Okay With This combines that clever twist with plenty of 1980s pop culture references. (The show takes place in modern times but feels like something directed by John Hughes.)

For Lillis, it was that combination that really attracted her to the script in the first place.

“I really liked the supernatural element,” she says. “I liked the superpowers, and her reaction to getting them was very funny. I also liked Entwistle’s dry British humor. I've never gotten to play this kind of character before, and I just thought it would be a lot of fun to do.”

After getting a copy of the script and showing it to her parents, Lillis auditioned for the role with a series of self-taped performances. Entwistle says it was a natural fit, adding that he even reworked the script to play to her talents as an actor.

“She's got the potential to be a great star ... it's just an old-school screen presence.” —Jonathan Entwistle, showrunner

“She has this way of going from fragile to strong in an instant across a scene that’s almost unnoticeable and really is perfect for what we wanted to do with Sydney,” he says. “Originally, the character was more angry and kind of snappy, and we tweaked it so you could have that something is eating her up from the inside. And I think it obviously works really well.”

Lillis enjoyed the entire experience, including working with her old It co-star Wyatt Oleff (Stanley Barber in I Am Not Okay With This), but one major highlight was an episode that directly references and riffs on the plot with perhaps the most famous 1980s movie of all time: The Breakfast Club.

After Sydney, her friends, and a few other students get stuck in detention in Episode 5, the plot quickly becomes a retelling of Breakfast Club while also throwing in plenty of other ‘80s references.

“Jonathan [Entwistle] did put a lot of John Hughes elements in the show, and the Breakfast Club episode was very on the nose,” Lillis says. “If we’re comparing everyone, I’d be Allison, the artistic one in the movie. She's my favorite character in The Breakfast Club, and I got to play that character, in a way, which I thought was awesome. I grew up watching those films, so to actually be a part of it was all really cool.”

Just like those John Hughes movies, growing up in Crown Heights, Brooklyn — a neighborhood smack dab in the middle of the borough that’s only just become gentrified in the past few years — had a notable influence on Lillis.

When you think about it, her Brooklyn upbringing explains a lot about the rising star: her effortless cool, the calm she emits even when running from a killer clown or grappling with dangerous superpowers, and her humble attitude even as her career continues to pick up speed. Perhaps most of all, you can tell she’s from Brooklyn by the way she talks about moving to Hollywood.

“Everyone moves to LA to continue their acting business,” she says, “but I feel like I get a lot in New York. There's so much here. I love Brooklyn.”

Lillis also credits her early interest in acting with growing up in New York.

“I used to go to a school in Times Square, so I got to see a lot of musicals,” she says. “I’d walk around and see all these shows coming up. It was really inspirational.”

“I’ve watched Rosemary's Baby and I really liked that.”

Beyond acting, she says she’s interested in set design, practical effects, or even one day possibly directing. Working on horror movies means seeing the ways Hollywood creates its own realities, and that’s something Lillis is interested in exploring.

“It's all this blood and gore and makeup and stuff,” she says. “Maybe one day I can do something like that. I've always been fascinated with special effects. Working with that kind of horror film, you get to see all this stuff happen that you probably would never experience. It always makes me think, ‘Man, this is a lot of fun. I'm glad I'm acting.’”

What comes next for Lillis is unclear. She’s got a few upcoming movies listed on IMDb in pre-production. Nothing in horror, but it hopefully won’t be too long before she returns to the genre.

If all else fails, the actress does have one idea for the perfect horror movie reboot: Rosemary's Baby. The 1968 movie about a young woman (Mia Farrow) who’s tricked into giving birth to the child of Satan feels like a perfect story for the #MeToo era when the female perspective plays a bigger role than ever in horror. And Sophia Lillis feels like the perfect actress for the part (just give it at least a few years).

“I've watched Rosemary's Baby and I really liked that,” she says. “I love her character; that would be fun to play.”

Sophia Lillis is a member of the Inverse Future 50, a group of 50 people who will be forces of good in the 2020s.