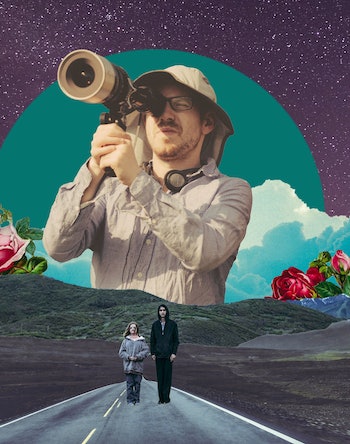 On the press tour for his 2018 breakout horror hit, Hereditary, the writer-director behind the scariest movie of the decade wanted to make it clear that he wasn’t just “the horror guy.”

“I am not the horror guy,” Aster told an interviewer from The Credits, the publication of the Motion Picture Association of America. “My next film is horror, but I intend to take a break from there.”

A year later, as that next film, Midsommar, hits theaters, he’s eager to clarify what he really meant about horror, along with his vision for the future of his career and the industry at large.

But first, he’s here to apologize to any die-hard horror fans he might have inadvertently insulted.

“Horror fans take umbrage with any filmmaker who shirks aside the idea they are a horror filmmaker,” Aster tells Inverse. “I wouldn’t want to do that. I’m a genre filmmaker, and I love the horror genre, and I love a bunch of other genres. What I meant to say was that I am not exclusive to horror or any other genre.”

Now, with two artful horror movies released to glowing reviews, Aster hopes he’ll have even more freedom moving forward. Even before Hereditary’s release, he’d written 11 scripts that span pretty much every genre you can imagine, but he already knows which movie he wants to do next.

“I really love dark comedy,” Aster says. “The next thing I’m thinking about doing is kind of an absurdist dark comedy. I have a big Sirkian melodrama that I’m really excited about, too. I’ve got a Western and a sci-fi film that I’ve been building. I really want to do a musical. I haven’t written one yet, but I love musicals. And I’ve got this gangster saga epic.”

See also: Director Ari Aster: How Movies Can Be a Force for Good in the 2020s

If it sounds like Aster’s a bit all over the place, well, that’s not wrong. (Though, if you’ve seen Midsommar you know he’s just as good at making an audience laugh as he is at scaring them.) But more than any specific genre, the idea of a genre excites him most. Specifically, it’s the way a traditional genre like horror or science fiction can be manipulated to tell unexpected stories.

“Hereditary is absolutely a horror film,” Aster says, “but it also exploits the horror genre to get at something else. For me, at its heart, it was more of a family tragedy; that’s what I was going for. But because I love genre so much, horror was the best way at that story.”

Midsommar is actually the only movie Aster’s written for hire (meaning a studio approached him to make the movie and not the other way around). Riding the initial buzz around Hereditary’s script, but still wary of being labeled a horror guy, Aster initially balked at an offer from Swedish agency B-Reel to make a movie about Americans getting murdered at a midsummer solstice festival.

“They were using Hostile as a reference,” he says. “At first, I was not interested in that, but I was going through a breakup at the time, and I was looking for a way into that story. I really wanted to write a breakup movie, so I gave myself the exercise of, instead of just passing outright on the material, I said, ‘Okay, let me think about this.’ I found a way to marry the breakup movie that I wanted to write with the folk horror genre they wanted. It became a joy to write.”

“I found a way to marry the breakup movie that I wanted to write with the folk horror genre they wanted. It became a joy to write.”

By the time Hereditary hit theaters, the script for Midsommar was finished, but it was still a mad dash to complete the movie and get it into theaters just over a year later. “We had less than two months to build the whole village.”

Aster’s always been a fan of building his own sets, largely because it lets him plan out as much as possible before shooting even begins. The family’s house in Hereditary was an original creation, allowing the director to meticulously choreograph some of the movie’s scariest scenes. (Hereditary even nods to this by making Toni Collette’s protagonist a professional artist known for constructing complex miniature models of houses and rooms.)

“I like to shoot the film in a way that doesn’t feel incidental,” Aster says. “I’m not somebody who’s energized by having more things to solve. I need to have a plan. I like to tell the story as precisely as possible. I like to block scenes out. I’m sure it drives some actors nuts.” (Aster, again, worked with the talented cinematographer Pawel Pogorzelski on Midsommar, as he did on Hereditary.)

In Midsommar, the director took this even further, building an entire village in the Hungarian countryside. (The movie takes place in Sweden, but Hungary was cheaper.) Beyond erecting a small town, they even had to clear a path through the woods for one of the movie’s most important moments: a scene where the main characters (a group of young Americans played by Florence Pugh, Jack Reynor, William Jackson Harper, and Vilhelm Blomgren) emerge from the forest into the middle of a pagan festival. “Where they emerge is very important because that’s their first view of the village,” Aster says.

There’s a looseness that pervades Midsommar. At two-and-a-half hours, the movie never drags, but it’s not exactly in a rush. Multiple scenes depict the main characters taking hallucinogenic mushrooms, dancing under Scandinavia’s never-ending midnight sun, or both, at the same time. The first full cut was four hours long, and Aster says he may eventually release a director’s cut that adds about 20 minutes of footage to the theatrical version. (He also confirmed a three-hour cut of Hereditary exists but will likely never see the light of day. “I don’t think anybody wants to see that.”)

If Midsommar is a horror movie on shrooms, then, in hindsight, Hereditary feels like horror on acid (“or crack,” Aster jokes). Where his first movie was tightly paced, grabbing the audience early on and refusing to let go, Midsommar meanders between horror, comedy, and moments seemingly included just to appreciate the beautiful backdrop. But behind the scenes, Midsommar was even more complicated and stressful.

“I would say I loosened up less,” Aster says. “With Hereditary, it was a lot easier because I was dealing with fewer actors. When you have like 80 actors choreographed in the background, the trick is to make it feel loose. So I’m glad it felt looser.”

Born in New York City in the late ‘80s, Aster traces his love for film back to the 1990 movie adaptation Dick Tracy. As a child, he ran screaming out of the theater during a particularly action-packed scene featuring a Tommy gun and a wall of fire. “ I ran six New York city blocks, running into the street and almost got hit by a bunch of cars, and had my mom chasing after a panic-stricken four-year-old,” he told The Verge in 2018.

Then, at 13, he smuggled a copy of the NC-17-rated The Cook, The Thief, His Wife & Her Lover out of a video store in another movie’s box. The film, which features cannibalism, had a lasting impact on Aster. “I regretted watching it for many years,” he told IndieWire.

After attending film school at the AFI Conservatory in Hollywood, Aster released a series of shorts. His first, The Strange Thing About the Johnsons (2011), tells the disturbing story of a family, where the adult son sexually abuses his father. The 30-minute film went viral after it was shared on WorldStarHipHop, and in an interview with Shadow and Act, Aster said his goal was to take one of the most disturbing ideas possible and then “transcend the absurdity of the premise and to actually consider the implications of such a thing.”

This combination of shock value and a deeper interest in the truth underneath carries through to all of Aster’s work. His movies want to upset you, but that’s just the beginning. By hooking viewers in early on with brutal terror, he’s able to get at something even deeper, whether that’s the family drama at the core of Hereditary or the dramatic breakup that inspired Midsommar.

As he prepares to leave horror (at least for the short-term), the director’s next test may be whether the next Ari Aster movie can keep its audience engaged without shocking them into submission first. For now, Aster is confident that it’s not horror, but cinema more broadly, that gives him the power to emotionally engage an audience.

“Films are empathy machines,” he says, paraphrasing Roger Ebert. “You’re able to sort of leave your skin and enter somebody else’s experience watching the film. I’m not a message filmmaker, or, at least, I hope I’m not seen as one, but maybe I’m inadvertently doing that without meaning to or wanting to.”

But maybe a movie doesn’t need a message to create empathy. Maybe it should just be sourced from a deeply personal place. If Aster continues to do that, there’s no genre he can’t master.

See also: Director Ari Aster: How Movies Can Be a Force for Good in the 2020s

Ari Aster is the director of Midsommar and Hereditary. He is a member of the Inverse Future 50.