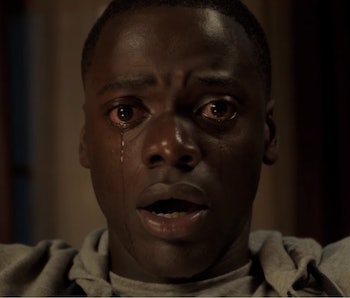 The real ending to Jordan Peele’s 2017 horror movie Get Out is far more uplifting than most people expected it to be. Daniel Kaluuya’s Chris narrowly avoids suburban slavery by escaping the Armitage family’s trap. But Peele’s alternative ending is much darker, much more realistic, and exactly what most movie-goers originally anticipated when a police cruiser rolled up to a blood-smeared Chris after his escape.

The recently revealed alternate ending to Get Out shows that, at one point, it wasn’t Chris’s buddy Rod (LilRel Howery) in the car with the police lights on — it was actually the cops, and they arrested Chris for killing the Armitage family. The scene then jumps to Rod visiting Chris in prison, where an orange jumpsuit-clad Chris tells Rod to “let it go.”

“I’m good,” Chris says as Rod tries to uncover more details to get Chris out of prison. “I stopped it.”

Chris is then led back to his cell, the barred door sliding shut behind him as he’s escorted down a hallway by a corrections officer.

Remember your relief in the theater when you realized it was Rod and not the police, and be thankful things went down how they did. Chris is alive and not in prison.

Get Out is now available on Digital HD and is set for release on DVD and Blu-ray on May 23.