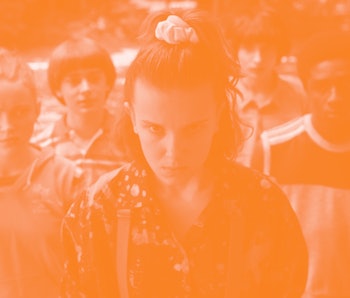 Social distancing and self-quarantine have become the everyday norm amid the coronavirus pandemic. For the safety of everyone involved, Hollywood has also shut down production on a multitude of TV shows and movies, with release date delays and cancellations practically inevitable at this point.

Disney has halted production on its Marvel shows, including The Falcon and the Winter Soldier and Loki. Netflix has officially suspended filming on all its shows for at least two weeks, leaving many in limbo. It’s possible that the release of Stranger Things Season 4 could be pushed back by months.

Stranger Things Season 4 started production only a month ago. Alongside the filming announcement, Netflix released a brief teaser that revealed that David Harbour's Hopper, now stuck in Russia, was "The American," the elusive character fans have theorized for months following the Season 3 finale. In early March, Netflix Vice President of Physical Production Momita SenGupta said Season 4 would be “bigger, bolder and more intricate than ever.” Much has changed since then, with production officially shutting down on March 16 for at least two weeks.

While the show has historically filmed in Atlanta, at least portions of Season 4 were being filmed in New Mexico when the Netflix series stopped filming. Considering that the show was only a month into production — which is not a long time for such a massive undertaking like Stranger Things — it’s possible Season 4’s premiere date may be postponed by at least a couple of months, if not longer. It all depends on whether the show will get back to filming in two weeks as planned, or if the increasing number of coronavirus cases will keep the cast and crew grounded for longer.

Production first began in Lithuania, where the crew filmed exterior locations as the backdrop for Russia. We saw these shots in the teaser trailer and it’s likely few scenes with the main cast have been filmed at this point. The official Netflix account released a fun video of the cast preparing for the Season 4 table read just ten days before the shutdown. This means the main cast has probably done very little filming at this point.

While we don't know whether Stranger Things films episodes in order like traditional network series, it’s possible that production on the first episode wasn’t completed at all. While a release date for Season 4 hadn’t been announced yet, early speculation held new episodes wouldn't drop until early 2021. However, it's now looking more likely it won’t be available to stream on Netflix until the summer or fall of 2021.

Filming was still underway when the cast and crew found out that production on Season 4 was being halted for the time being. Director and executive producer Shawn Levy told Variety he was caught between blocking scenes and getting on the phone with Netflix reps regarding the coronavirus situation.

Having to shut down production just as the cast and crew were getting back into the groove was a “bittersweet moment,” he said, with the crew having to dismantle the set on short notice. While the shutdown was for the best, Levy told Variety he was optimistic that the suspension wouldn't cause a long-term delay to the release of Season 4. For now, only time will tell.

All three seasons of Stranger Things are available to stream on Netflix.