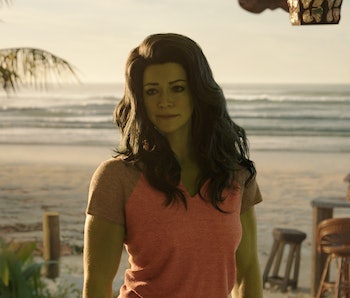 Back in 2008, if you stayed through the end credits of Iron Man, you met Samuel L. Jackson as Marvel’s man of mystery, Nick Fury, telling Tony Stark (Robert Downey Jr.) about “the Avengers Initiative.” Thus began a glorious tradition in the Marvel Cinematic Universe: The must-see post-credits scene, in which something is revealed about the expansive shared universe. But not all post-credits are made equal and, in the case of She-Hulk: Attorney At Law, the post-credits are what they haven’t been in a long time: fun.

Warning: Spoilers for She-Hulk: Attorney At Law Episode 2 ahead.

In the second chapter of Jennifer Walters’ (Tatiana Maslany) story, Marvel fans meet her humble but loving family, who invite their thirtysomething daughter over for dinner. The episode itself doesn’t dwell too much on Jennifer’s family, save for the humor of her mom trying to set her up with a stranger and the fact that her family thinks as much of their daughter’s new powers as they do her brother’s promotion at Best Buy. (Seems having a superhero in the family is only so remarkable when you live in the MCU.)

The episode’s post-credits scene, however, revisits Jennifer’s family. As any normal family with a Hulk — especially one who isn’t going to smash the walls uncontrollably — would do, the Walters use She-Hulk’s considerable skills to check some errands and household tasks off the to-do list.

We watch She-Hulk hoist the family car while her brother and father bicker about tires. We see Jennifer carry jugs of water inside the house, and help install a new flat-screen TV. Hey, wouldn’t you ask your daughter/sister for help if they were She-Hulk? With great power comes great convenience, right?

Some Marvel fans might be miffed that She-Hulk: Attorney At Law doesn’t drop a teaser for Daredevil or whatever. But the post-credits scenes aren’t always supposed to tease what’s next. In fact, the most boring teasers ever in Marvel’s movies are the ones that do just that.

In defense of She-Hulk’s low-stakes post-credits

While it was neat to hear the word “Avengers” uttered back in Iron Man, not all of the franchise’s post-credits scenes have elicited that same level of boundless excitement.

The teaser for Thor in Iron Man 2 was, debatably, just as exciting as Fury teasing the Avengers. But the post-credits scene actually hyping The Avengers at the end of Thor was comparatively a dud, slamming audiences with a bunch of incomprehensible jargon, a morose tone, and a confusing bit showcasing Loki’s (Tom Hiddleston) control of Dr. Erik Selvig (Stellan Skarsgård). (By the way, the scene doesn’t even make sense, as Selvig was turned by Loki onscreen in The Avengers.)

So what’s the next most memorable post-credits scene in Phase One? It wasn’t about Thanos or the Infinity Stones. It was seeing the battle-worn, exhausted, possibly traumatized Avengers eating shawarma. Before the MCU got wrapped up in the next big thing, the Avengers chowing down on halal memorably capped off the biggest movie of 2012 (and helped drive shawarma sales). Fans loved it, too; I remember going to New York Comic-Con that same year and my friends stopping a guy with a “ShawarmA” t-shirt modeled after the Avengers logo.

If only we knew that it would be downhill from there. The teasers across Phases Two and Three were either deadly serious (Ant-Man, Avengers: Age of Ultron) or, in rarer instances, brilliantly stupid (Guardians of the Galaxy). Then came Phase Three, where the post-credits began following an unspoken MCU rule to always introduce either some wrinkle for the next movie or a yelp-worthy cameo that would generate chatter on social media over premiere weekend.

That leads us to the garbage that has been Phase Four’s post-credits scenes, almost all of them feeling more obligatory than brimming with possibility. (We really watched a whole Black Widow movie only to get a teaser for... Hawkeye.) Whether they leave audiences scratching their heads, like in Shang-Chi and the Legend of the Ten Rings, or are overwritten, like Harry Styles’ debut as Starfox in Eternals, Marvel’s post-credits scenes simply haven’t been fun in years.

Thank heaven for Bruce Campbell willing to punch himself for Multiverse of Madness, and thank heaven for She-Hulk. Even if none of its post-credits scenes prove particularly memorable, it’s good to know this universe can still have fun without exhaustively trying to set up Secret Wars or something else. Characters in the MCU have experienced the literal apocalypse. You can’t blame them for wanting something a little less stressful every once in a while.