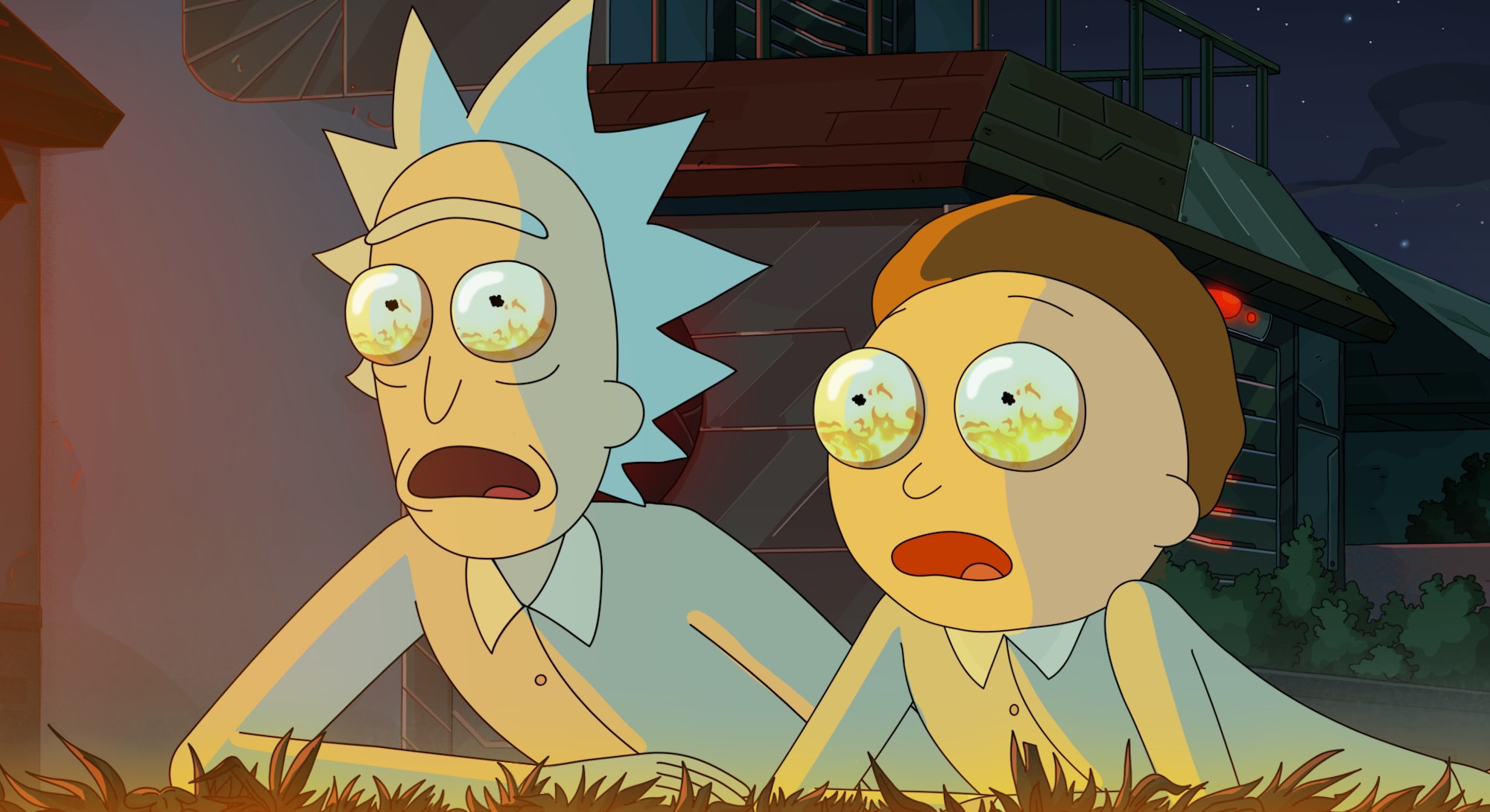 The Rick and Morty Season 5 finale dropped some huge bombshells for the future of Adult Swim’s Emmy award-winning series.

Rick Sanchez C-137 spent years hunting down the Rick variant who murdered his original wife and daughter, slaughtering enough Ricks along the way that a bunch more banded together to create the Citadel. But now that Evil Morty has destroyed the Citadel and seemingly Rick’s portal gun tech with it, the future of Rick and Morty at large looks uncertain.

But don’t be concerned, showrunner Scott Marder and producer James Siciliano tells Inverse that we’re about to enter an exciting new era of Rick and Morty in Season 6.

“510 was a huge finale,” Marder tells Inverse. “It left us with a ton of homework and a lot to live up to. I feel like it closes that book, but at the same time, opens up a new one. There was a clear and present danger that was always there that so naturally emerged coinciding with Evil Morty to begin the second half of a larger story.”

Season 5 may have been the end of an era, but Season 6 is the start of something new: consistency.

“We’ll have a season of the show every year from this point forward,” Marder promises.

Does that mean we’re looking at at least 10 total seasons? For more on the team’s approach to parodying Die Hard, working with series co-creator Dan Harmon, and their vision for Rick and Morty Season 6 and beyond, keep reading.

The dazzling Season 6 trailer has Rick implore Summer to simply “do a Die Hard.”

The Season 6 trailer shows summer “doing a Die Hard.” How long has the team wanted to tackle Die Hard and how did it develop?

Scott Marder: A lot of us are in the same age range, so Die Hard was really in the ether. Even Dan Harmon would tell you that Die Hard wasn’t necessarily up on a board or anything. Ironically, we ended up tackling a really complex story for the A-plot of that episode. Harmon was just like, “What’s left over?” We’ve got a sort of hostage thing. “Just give me a Die Hard!”

Yeah, but what’s our spin on it? “Keep it simple,” he said. “Give me a Die Hard! Just let me know when we need to take breaks from the A-story.”

So it started from the simplest place. As it evolved, we started playing around and decided that the main character — Summer — didn't know what it meant to be in a Die Hard. The main focus had really been nurturing that A-story for a while.

“Die Hard might be one of Harmon’s favorite movies.”

James Siciliano: I think Die Hard might be one of Harmon’s favorite movies: Die Hard, Robocop, that era and genre are big for him.

Yeah, he’s referenced Die Hard a number of times when explaining his infamous Story Circle concept. So I have to ask: Is Die Hard a Christmas movie?

JS: Definitely. I don’t know that long lines need to be drawn in the sand, but it certainly feels like a Christmas movie to me. There are Christmas lights in it!

SM: Even even that third one had the shoplifting kid who bumps into John McClane on the street and is like, “Hey man, you can steal anything you want. It’s Christmas out here!”

Are there any other classic genre films or stories that the team wants to do?

SM: It's not necessarily always movies that we're looking to tackle. Sometimes it's complex concepts or cool sci-fi angles. Our blue sky whiteboard has a bunch of cool ideas. How do we squeeze them in? Are these full episodes rather than like Blade Runner and stuff like that? Sometimes those just naturally start marrying. Or, as we're breaking it, we're like, “Oh, man, we could do a take on Ex Machina that can do X.” We take a small idea, put an engine in it, and then the whole thing starts running. That's usually how it goes.

“We could do a take on Ex Machina that can do X.”

JS: It’s usually very story driven. We'll take quadrants of the story and wonder what movie does this fit into? Or, what can we inject into it? We don't usually go, “We love this movie. Let's get it in!” It's usually the reverse: “This story is mapping onto an Ex Machina story.” We always lean into that impulse, sometimes more than others. Die Hard is an example of super-leaning into it.

What’s the division of labor look like on the show these days between producers like yourselves and co-creators Dan Harmon and Justin Roiland?

JM: Scott is the showrunner for sure. I am a humble servant of the show. Scott’s the main guy who puts it all on his shoulders, then the rest of the team — including me — take it from there.

SM: I was brought on in Season 5 to be the everyday guy that keeps the show running. Comedically, when I started, Harmon was like, “Oopsie! Season 4 is not quite done yet. Don’t worry. That doesn’t need to be your problem.” Dude, I can’t just start Season 5 with Season 4 not being finished! So we got to work and finished Season 4. Then we broke “The Vat of Acid Episode” within the first few days of work, which was really rad.

That episode is one of the all-time greats!

SM: That really helped us hit the ground running. I came in and lucked out finding guys like James and Albro [Lundy] and so many other great people on our staff. James is my number two, and I lean on him hard. We're the guys that keep the engines moving every day so Harmon can come in, come out, do what he needs, and have fun keeping it going.

“We're the guys that keep the engines moving every day.”

JS: There’s an unbelievable amount that we have going on. I don't know how much we could talk about, but as far as the production, we have Season 6 coming out, and Season 7 in production. We have the writers’ room for Season 8 going. So that’s about 20 episodes in some form of production, and the new season that we're breaking.

SM: I’ve created a high-class problem for us, but we’ll have a season of the show every year from this point forward.

Excellent! I’m sure fans will be thrilled to hear that. What does the process look like for revisiting various dangling plot threads? Is it like the genre references morphing onto the stories?

SM: There are always characters and pieces of previous episodes that writers are personally interested in. Sometimes those up on the board that we're looking to maybe hit on again. In general, after Season 5 — which I'm really proud of — we wanted to move forward and tweak the show so there’s a little bit more interconnectivity where it’s better able to look backward and forwards. We want the episodes to feel more self-aware, in a sense, rather than standalone the way they primarily did in Season 5.

“We’re excited to pick up those really cool threads and nurture them.”

So that’s why you're seeing us pick up some things that we may have put down previously. We're fans of the show as well, even though we get to work on it, but we’re excited to pick up those really cool threads and nurture them and keep them moving towards the bigger story goals.

The Season 5 finale dropped several bombshells. What was it like approaching the Season 6 premiere?

SM: The breaking of 6.01 was a really arduous process because 510 was a huge finale. It left us with a ton of homework and a lot to live up to. We actually had a few different versions of the episode that were completely different. We ultimately weren't happy with it and scrapped it and found this one that you guys are getting now. I feel like it closes that book, but at the same time, opens up a new one. There was a clear and present danger that was always there that so naturally emerged coinciding with Evil Morty to begin the second half of a larger story.

What are you excited the most about in Season 6?

SM: Yeah, it's got some awesome new characters like Nimbus that people are gonna go nuts over. We're really excited because we're almost through our end of like color on Season 6. It’s another badass season we’re all really excited about.