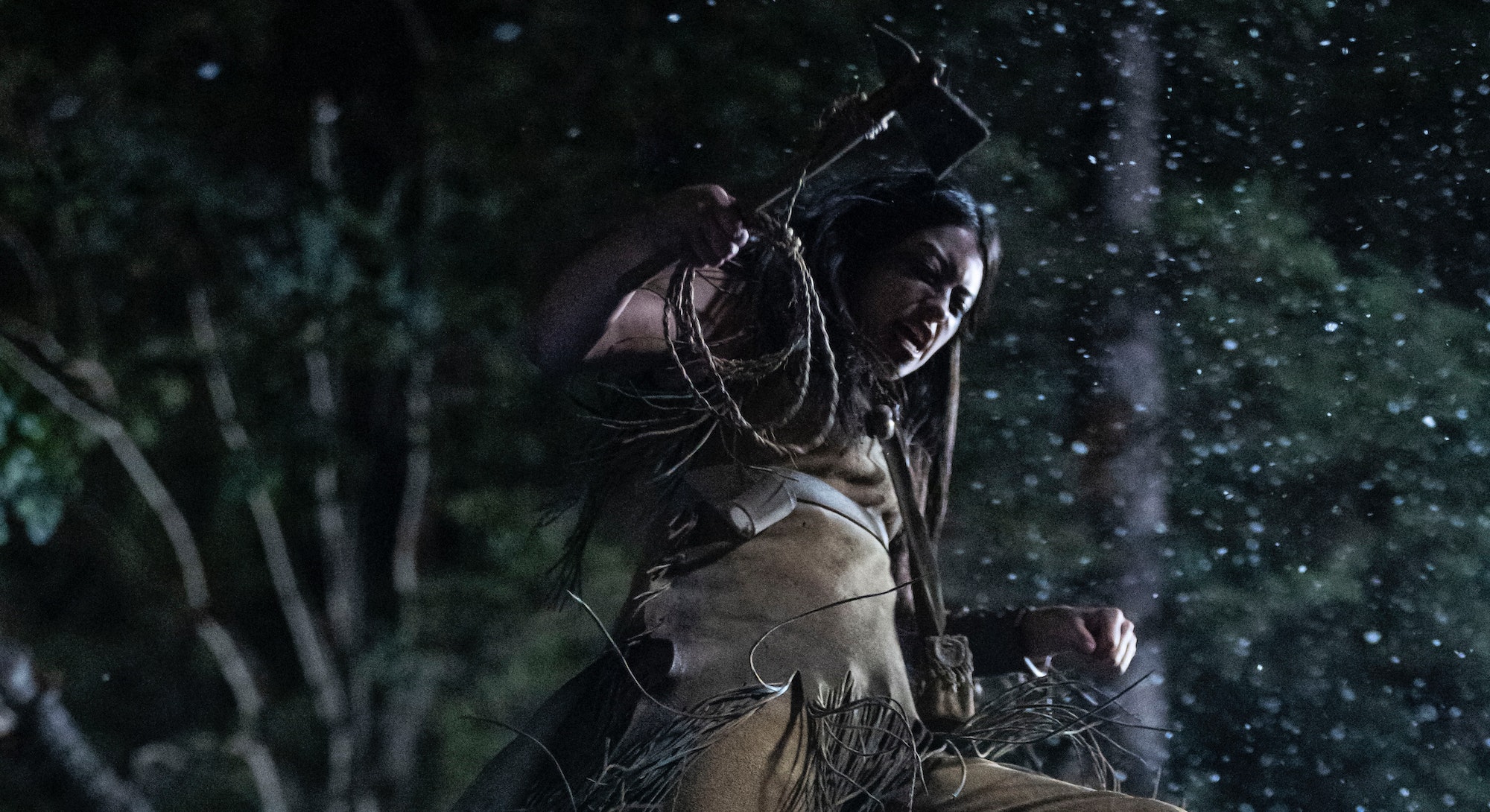 “If it bleeds, we can kill it.” Arnold Schwarzenegger spoke these words in the beefcake sci-fi classic Predator. 35 years later, Prey trades assault rifles for arrows and commandos for Comanche warriors — but the bold sentiment holds.

Directed by Dan Trachtenberg from a script by Patrick Aison, Prey lives up to the gory glory expected of the Predator franchise while relishing in its novel 18th-century setting and Indigenous American ensemble cast.

While Prey is not as aggressive as it could be nor as emotionally fulfilling as it should, it’s still an impressive, albeit strange, standalone prequel. This is a multifaceted experience ripe with the kind of blood-pumping adrenaline common in action movies of the VHS era, but elegiac compositions put it in league with today’s progressive arthouse trends. Prey makes the most of these elements, and though it never fully stands on its feet, it’s easy to stay engaged during its lean 90 minutes.

Prey fixates on a young Comanche girl named Naru (Amber Midthunder, Legion) from the Northern Plains of the early 18th century. She’s an aspiring hunter who refuses to adhere to her community’s gendered roles.

(This community, by the way, speaks conversational English. Later, when incomprehensible French settlers arrive, we learn Prey wants to challenge entrenched ideas of who we think the heroes are heroes in cinema. The release on Hulu will come with an alternative Comanche dub track, which was not provided to journalists for preview.)

Though Naru fails to track down a troublesome lion, she finds something far more dangerous: a Predator, another one of pop culture’s iconic dreadlock trophy hunters. Ex-basketball star Dane DiLiegro suits up as this film’s Predator, a nameless villain who speaks only in ominous clicks.

As our protagonist, Naru is unlike Schwarzenegger's Dutch in obvious ways: She’s shorter, leaner, and her clothes practically wear her more than she wears them. But through Amber Midhunter, whose piercing brown eyes pop atop her black war paint, Naru never feels like a spunky Disney princess — and she’s a lot more like Dutch than she’ll ever know.

Inside Naru is not the heart of a hero but a survivor and a warrior. Early in the film, Trachtenberg and cinematographer Jeff Cutter frame Midthunder in a gorgeous hero shot that tracks her in the village under a late afternoon sky. They later follow her through equally breathtaking scenery that should frankly be sold as tourism advertising for the region. These painterly touches are rarely seen in the franchise (this might be the first since the samurai sword fight in 2010’s Predators), but it’s what uniquely defines Prey from its predecessors and make it come alive.

It’s critical that Naru doesn’t seek the Predator because he’s a monster (though protecting the village adds necessary urgency to the plot), but because she has something to prove. This targeted goal underlines all of Prey, manifesting moments like Naru’s innovations in her arsenal to her fast study of alien biology. Though its pre-colonial settings make Prey the black sheep of the series, the spirit of its protagonist brings Prey closer to the stone-cold classic Predator than any other sequel before it.

Trachtenberg, whose past works include the 2011 Portal fan film and 2016’s 10 Cloverfield Lane, has long demonstrated a preoccupation with characters in settings that limit them. The wide plains of Prey remove his claustrophobic motifs, but Trachtenberg nonetheless stages his film’s most critical moments in tight spaces. Even in a forest or a field of wheat, escaping a hungry bear or the Predator himself feels like a fool’s errand when there’s nowhere to run.

Sadly, Trachtenberg isn’t quite the artist that Prey really needed. Trachtenberg knows tension, visual composition, and the nuances that make characters so compelling. Most of Prey works wonderfully in the moment, but the totality feels just a few inches short of what it should have been. The visceral thrill of a brave young woman with indigenous weaponry against a monster with advanced technology is an obviously loaded metaphor that challenges Western cinema’s tradition of portraying Native Americans as “savages,” and white men with guns as noble heroes. The final product should feel more poignant than the novelty pro-wrestling-like showdown we get in the end.

As the first Predator movie produced by Disney since its acquisition of 20th Century Fox, there’s a healthy skepticism about what the cultural superpower that swallowed up Marvel and Star Wars will do to Fox’s roster of hard-R franchises. (Other film IP now under Disney’s control to note: Alien, Independence Day, Planet of the Apes, and Kingsman.)

If Prey is any indication, there won’t be a sacrifice of violent content; Prey has oodles of bloodletting one comes to expect of these movies, albeit not as gleefully as the kills in Predator 2. But what fans of these IP should expect are changes in tone and style. No longer can these movies simply be all body counts and bad dialogue. Prey may take place in the distant past, but it’s irresistible to feel it as anything but the harbinger of what’s to come for R-rated action sci-fi.

Ultimately, Prey descends from an established film franchise. In ways not so obvious, it bears a lot of resemblance to the original that started it all. But its distinct characteristics, such as its modernist filmmaking, ensure it also stands apart. On its own, Prey is a remarkable portrait of bravery in the face of survival, and at just 90 minutes, it’s a taut action-thriller that feels old school yet exciting for a new generation.

It doesn’t exactly hit the bullseye, but collecting the bounty has never matched up to the thrill of the hunt anyway, right?

Prey will begin streaming on Hulu on August 5.