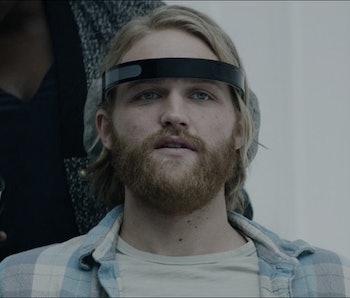 “Playtest” focuses on a freewheeling American tourist named Cooper (Wyatt Russell), who is mourning his late father while taking a solo trip around the world. Eventually, he finds himself in London, rich in new experiences but short on cash. After a one-night stand with gaming journalist named Sonja (Hannah John-Kamen), he signs up to beta test a new augmented reality system for a Shigeru Miyamoto-esque game developer for some much-needed money. What he finds when he’s taken to the gaming company’s remote facility is more horrific — and personal — than anything he could have imagined.

Inverse caught up with Trachtenberg and chatted about binge-watching, collaborating with Brooker, and how Big Trouble in Little China influenced “Playtest.”

How did get the gig directing “Playtest” for Season 3?

I first heard about Black Mirror from Mary Elizabeth Winstead on the set of 10 Cloverfield Lane after she had spent the weekend binge-watching it. When I finished directing the movie, I immediately binge-watched it too.

It wasn’t until a couple weeks after Cloverfield Lane premiered that I got a call about them needing a director for the final episode of the season. The release order is different, but we were the last episode of Season 3 to shoot. I hopped on a Skype call with Charlie Brooker and Executive Producer Annabel Jones and we hit it off immensely.

So you were matched to this episode specifically?

I’m not sure if they knew about it when we first talked, but I’m a huge gamer and Charlie is too, and my episode is obviously video game-themed. I think they got wind of me because Annabel said she was shrieking in the theater watching Cloverfield Lane and they wanted the same kind of feel for this story. Then they contacted me, and the video game influence became so much more rich once Charlie and I got together. They only had a script treatment at that time, so I flew out to London to develop the script further.

What was the collaboration with Charlie Brooker like? How hands-on is he with each episode?

He tends to spend less time on the set, but he spends a lot of time developing the scripts and is incredibly collaborative with that. He writes pretty much every episode by himself, but we went over every page together. He does get very hands-on in post-production, especially with all the tech-related stuff.

He has a very specific way of seeing things, and both he and I share the same bugaboo with how tech is portrayed so often in movies and TV where it’s just totally false. These are objects we interact with all the time, so it’s important for us to be a little bit more literal with graphics or design. He always wants to be diligent in making things feel like they could happen a certain way or should happen that way. Instead of having those kinds of things be big and obvious for the audience and having them say the plot for you it’s much better to be realistic about something even if it’s supposed to be futuristic. All of us who love Black Mirror really respond to that, so it’s a direct correlation to how much time Charlie spends in the post-production process getting all that stuff right.

What was the approach the design and function of the AR tech in “Playtest”?

Everything for us was always five minutes in the future. Right now we have Google Glass and Oculus, and our AR is the very next iteration of that. The phone interfaces in the episode are not the OS we have today but close to it.

Obviously for Charlie it’s about how that could be simultaneously a great thing and a terrible thing. We wanted to skew things towards being on the cusp of a dangerous execution of it, but also include an aspect of wish fulfillment.

Playtest seems to be very much set in our world.

I often asked Charlie if all the episodes were set in the same reality as different slices of the same future of ours. I think for him they’re not, and that’s so exciting. You get a new world every time you turn on a new episode. But this one is definitely more modern day.

There’s also kind of three separate sections of the episode. There’s the tourist drama in the beginning, the sci-fi element in the middle at Saito Gemu, and the horror flick at Harlech Shadow in the end. Did you intentionally approach these sections as different genres?

I definitely wanted the audience to bond with the main character, Cooper, through the naturalism of the first half. We almost wanted it to feel like a romantic comedy, and then it spirals in different directions so you don’t know where it’s going. But it was also important for people familiar with genre tropes or the show itself that you may have a sense of impending doom. There’s a lot of tension in really delaying when the shoe drops.

I loved getting to know our lead in a fun way, and then sending him into these other genres and having him deal with it. It’s something I love about Army of Darkness, but also, ironically enough, Big Trouble in Little China. What’s so great about that movie is you have a character straight out of a Western and you throw him into one insane genre after another.

Beyond the obvious connection, what else drew you to Wyatt Russell for the role of Cooper?

Honestly, we just had a great Skype conversation. I’d only seen clips of stuff he was in. Everybody Wants Some!! wasn’t out yet in London when we were auditioning, but I’d seen 22 Jump Street.

The role was very different on the page. It wasn’t as funny. He had a couple of biting moments, but it was more that Cooper was kind of a dick who learned a lesson. During our conversations Wyatt really thought this guy could be loose and funny, and that was exactly what it needed. So we reshaped the story about this guy who we should feel sorry for and are rooting for.

I’m working on a lot actually, some TV stuff and movie stuff. But I don’t have anything specific to speak of yet. But doing Cloverfield Lane has helped me out for sure. It got me Black Mirror, and I’m excited for this to come out.