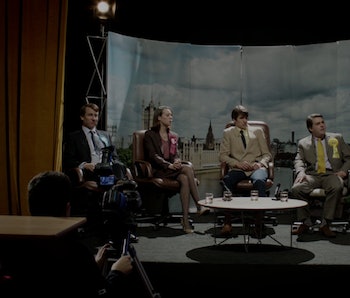 Black Mirror: White Christmas is currently making waves after its recent integration into Netflix streaming. But viewers returning to the show, which has been gaining particular steam stateside over the past year and a half, reminds us that this fall, Variety confirmed that Black Mirror was confirmed for a new 12-episode season on Netflix.

Previously, the show has been broadcast by Channel 4 in the UK, in three episode seasons. The Netflix offer will instantly expose Black Mirror to a larger audience who are by this point rabid for more episodes of the show — the release of Ex Machina, a film that is basically a long Black Mirror episode and features one of its most iconic actors, was only a stop-gap measure. It was a deal showrunners Charlie Brooker and Annabel Jones couldn’t refuse.

We’ve speculated a bit about where Black Mirror could go from here in terms of subject matter — what possible technological advances has it not yet commented upon, or what could be delved into further. A post-Uber ride from hell could, indeed, be a good one. But what do we concretely know about the new, Netflix-exclusive Black Mirror at this point?

For one thing it is probably coming later in 2016. Production was slated to begin this year, and as of the September announcement that the Netflix season was confirmed, Brooker has written several episodes.

We do know two of the confirmed stars as well.

First, there’s Gugu Mbatha-Raw, the British star who got her start in speculative, weird-out TV with a turn in Doctor Who in 2007. Since then, her star has risen in the film world. She made acclaimed turns in 2013’s Belle and subsequently Beyond the Lights. This year, she’s appeared in bigger Hollywood productions like the Wachowski’s Jupiter Ascending, the Keanu Reeves thriller The Whole Truth, and Will Smith’s brand new football-can-kill-you drama Concussion.

She’s a powerful, committed actress who seems more than capable — from her background in epic, intimate dramas — to be able to handle the complex emotional shifts any Black Mirror character has to move through.

Then there’s Mackenzie Davis, the star who made her name with films like the Canadian dramedy and Daniel Radcliffe/Adam Driver feature The F Word in 2013. Her face is more recognizable after this year where she starred in Halt and Catch Fire and appeared in The Martian as a Mission Control satellite planner.

One of the best tidbits we know about her is the insane hobby she outlines below. She’s definitely Black Mirror material — no question.

The two are set to star in an episode directed by Owen Harris, whose biggest claim to fame is Kill Your Friends, a Britpop-based thriller.

That’s all we have for now. We’ll see how this whole ambitious project turns out, but given his track record over the last 7 episodes of the series, there’s no reason to think he’ll slow down now, especially with the further creative control the Netflix platform will provide him.