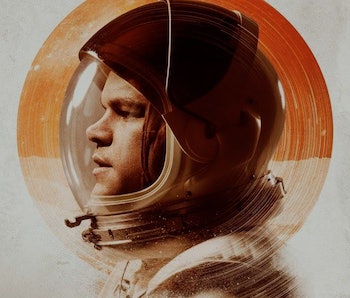 It seems like everybody is tuned in to the red planet following NASA’s big announcement of flowing water on Mars, which was probably the best cross promotion that director Ridley Scott’s new sci-fi masterpiece The Martian could have asked for. But besides winning the convenient-release-date-during-a-huge-NASA-announcement award, The Martian also has the dubious distinction of being the only good movie that takes place on Mars ever made. Seriously, think about it. There has been plenty of screentime devoted to astronauts inevitably screwing up on the red planet for maximum special effects-ridden drama, but none of them have been any good. Here’s proof.

The first in a pair of Y2K movies about Mars, 2000’s Red Planet failed to be a slick and moderately budgeted special effects thriller with a science-y slant. Instead it succeeded in being a goofy and forgettable Val Kilmer movie with nematode aliens and an evil robot named “AMEE.” Taking place in a near future Earth ravaged by pollution and overpopulation — a hallmark of every near-future sci-fi story — the film set up an ecological premise about terraforming Mars but bungled the landing. By adding in the AMEE robot the movie devolves into a simple chase movie except set on Mars, and by the time the movie tries to fit in a hackneyed, cutesy relationship between Kilmer and Carrie-Anne Moss as the mission commander it’s too late to care.

Famed animation director Andrew Stanton’s first live action film was doomed from the start. After spending decades in development hell, it seemed as though the era of Hollywood blockbusters had passed the movie by as each new CGI spectacle picked the bones of John Carter’s influential original Princess of Mars source material. By the time John Carter was released it just seemed like a derivative, neutered knockoff of itself. Disney was so afraid of even mentioning the red planet following the epic box office disaster of their animated film Mars Needs Moms (also another terrible Mars movie) they forced Stanton to shorten the title from the more intuitive John Carter of Mars. Who was John Carter, and why did he get his own big budget Disney franchise-starter? Nobody cared.

It also came during that storied time in our history when Taylor Kitsch was being touted as the next leading man. The guy has definite acting chops — scope out a little show called Friday Night Lights the next time you’re perusing Netflix — but being the gruff human leader of an ancient Martian civilization is a far cry from the moody running back on the football team of a small Texas high school. Better to be as far away from Mars as possible.

The second twin in the doomed Y2K Mars movie contingent, director Brian DePalma’s heady Mars movie continues to be controversial even fifteen years after it was first released. Is it any good? Not really. Famed French film magazine Cahiers du Cinéma may have put the movie in their top ten movies of the year for 2000, but when have they mattered outside of snooty film school classes and the Nouvelle Vague fifty years ago? DePalma tried to match the weighty philosophical musings of 2001: A Space Odyssey with goofy Saturday morning serials like Buck Rogers and it just didn’t mix. The ensemble featuring perennial regular joes Gary Sinise, Don Cheadle, and Tim Robbins also didn’t do much in the charisma department, and the faux inspiring ending mostly prompted heavy eye-rolls instead of genuine awe.

Horror master John Carpenter had a legendary 1970s, a memorable 1980s, a painful 1990s, and regrettable 2000s. Granted he only made two movies during that time, but it’s not pretty. Nowhere is this more obvious than his 2001 sci-fi/horror mistake Ghosts of Mars.

What originally started out as an incredible-sounding third Snake Plissken movie to be titled Escape From Mars ended up being an embarrassing and sloppy mishmash of many of Carpenter’s better movies. The remote setting was done better in The Thing. The disembodied force of evil was done better in The Fog. The indestructible baddie was done better in Halloween. Ice Cube’s no nonsense anti-hero was done better in Escape from New York. The less-than comparisons continue on from there ad infinitum so much that it just gives Mars a bad rap.

If the “Every Mars Movie is Bad” argument looked like it would fall apart, Total Recall would probably be the main reason. But don’t forget, Total Recall isn’t a good movie. Before you go siccing Cohaagen’s goons on us, just calm down for a second. If anything, Total Recall and its beefed up Schwarzenegger-infused dreamlike tale of three-fingered Martians making the red planet habitable is cheesily enduring. Does that make it a good movie? Not necessarily. As with every Paul Verhoeven movie, the satirical campiness levels are through the roof, which makes some people confused into thinking this is a good thing. Being gloriously trashy may count elsewhere, but not on Mars.